As is the problem with most "broadband" webpages, AriZona's website uses so much flash as to make individual images and notes unlinkable. For a look at their content, you can surf over to Drink AriZona. It includes nutritional facts, basic proganda, a message board, and other interesting information.

While us Southerners do enjoy a good mixture of sweet tea and lemonade, I have never heard it called an Arnold Palmer until the day I picked up a can of this tea (partially because I misread the label "iced chai" and lemonade, for some unknown reason). Apparently the man likes the mixture but the story the website spills, namely "created by the man himself", is kind of like me claiming the creation of putting mustard on french fries: several of my older relatives have drunk this since they were kids (meaning about 1940 or so).

Semantics and history lessons aside, this is my absolute least favorite of the AriZona canned drinks. And it's not the overall concept (as I said, I like the blend when I make it at home or one of my family members makes it), but the final execution. The blend makes use of both high fructose corn syrup and Sucralose, meaning it will probably inflame the taste buds of both sugar lovers and fake sugar lovers. It ends up with some sort of skewed back of the throat sweetness and the only benefit is a calorie drop down to 50 calories per serving, which is the same that some of their other blends get when using real sugar. To top it off, the tea flavor is just a tad too weak to fight the strength of the lemonade half and it easy to lose track of it. I'm a tea lover, not quite a lemonade lover and I would rather have the former over the latter any day.

This one gets a Meh from me. 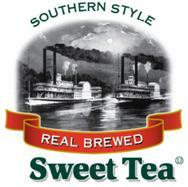 What is meant to make this particularly Southern, I do not know. It is sweet tea, but then all of the AriZona canned varieties I know of are sweetened to some degree or another, and Southerners tend to not use high fructose corn syrup as our sweetener). There is a citrus tang, somewhat emulating a lemon splash, but not quite, that is common to most of the AriZona varieties (presumably it is the citric acid they use as a natural preservative since the Vitamin C content of 0% tends to leave out the use of actual lemon juice). While tasty in a sweet, not-quite-tea way, this is one of my least favorite varieties. Anyone who likes this blend should try for Milo's Famous Sweet Tea and see a lot better ambassador of the Southern style of making sweet tea.

Considering the amount you get for the price, the tea gets an Eh rating, but since AriZona does it better with other blends, it is borderline Meh.

In fact, the main reason I even included this to begin with was just to show off a link about some of the controversy involving the tea's supposedly racist undertones. Now, while I fully believe AriZona's statement that it was all bunk, I do have to say that the blurry little red dress woman could look a lot like Aunt Jemima if you just glanced at it. Look at the label in the Snopes article, and then look at this little Jemima doll, and look at both in kind of a hurry:

However, if you go to closer inspection, even kind of blurred out by the can's limitation, it is kind of obvous she has a big frou-frou hat on and is carying a basket away from the house. In fact, the statement that many have said, that the man on the porch looks to be a black man holding a white woman's arm, is actually kind of true. He looks a couple of shades darker than the woman in front.

This tea probably needs no introduction. Back in the day before energy drinks exploded into a hundred billion jitters causing varieties, AriZona's Green Tea with Ginseng & Honey with its green bottle was the drink for people in no mood for soda. This means it has the honor of being one of the few well-selling tea drinks released before the tea boom of 2006 or so. It also has the honor of introducing a lot of people to green tea in our mostly black tea American culture.

Drinking it now, it is still a classic, and still good to drink, if the comparison is to other sweetened drinks in the cold drinks aisle. If you are looking for tea, you might want to keep looking through. At 7.5 milligrams of caffeine per serving, this puts it under half the caffeine content of your average green tea cup. Either they decaffeinate or they use a fairly weak green tea mixture. I am guessing the latter, because the distinctive leafiness of green tea is wholly absent from the mix.

Still, the flavor is not bad and the calorie content of 70 per 8 oz still beats the heck out of soda.

I give this blend an Eh for tea, a Good for taste and a Great for memories. 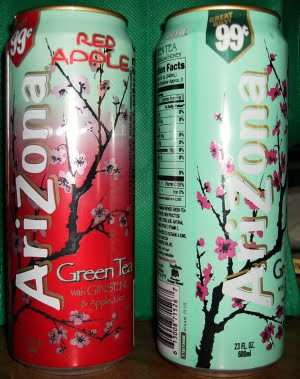 Almost identical to the Green Tea with Ginseng & Honey in every way, with a couple of splashes of fruit juice added in. Nothing really leads to liking this bland over the other gree varieties, unless you are a big apple juice lover. And, in that case, beware the fact that the apple juice is a light flavor with a slightly flat effect (apple juice and tea makes sort of a taste plateau when mixed).

I suppose it gets the same ratings as above, though it has no memories and tops off at Eh/Good (though I prefer the tea sans apples).

The tea blend to shame other AriZona tea blends. Not only does this have a good taste with only a minimal amount of that "citrus background" that AriZona loves, but it uses real sugar and only has 50 calories per serving. How Southern Style got stuck with fake sugar and this one got real sugar, I will never know. And it's as light as their "Lite" drink blends with only 50 calories per serving.

I know taste and cost are always a tug-of-war but it just seems that they could adapt the lessons taught by this can into their other blends.

If you are a diehard tea lover, this might not still be for you. While this has more tea taste their their other varieties, I only pick up faint amounts of that white tea "fruit" and the only faint amounts of black tea. It is enough to count in my book, but it is not super strong. Assuming, for no real reason, half-and-half, the calorie content should be about 30 milligrams per serving. At 15 mg per serving, this suggests that it is half-strength tea.

Still, though, I find it to be quite Good and my current favorite of their blends.