Why an upcoming Eighth Doctor release from Big Finish has me especially excited, and the slight glitch it will create involving the Ninth Doctor's first episode

Summary: In Dark Eyes, we finally get to see an updated Paul McGann outfit, hurrah. All is well and good in the world. Though this does create a bit of a weirdness with a brief glimpse in the very first episode of New-Who.

Why an upcoming Eighth Doctor release from Big Finish has me especially excited, and the slight glitch it will create involving the Ninth Doctor's first episode

Since the reports of an updated Doctor-Number-8 outfit have surfaced, or at least reports surfaced that Paul McGann had something like a new Doctor Who outfit complete with his new and improved Sonic Screwdriver, many fans have been excitedly waiting to see it show up in anything like official or semi-official materials. Especially intriguing was the fact that it was visually similar to what Eccelston's Ninth Doctor was wearing, and since the assumption is that the Eighth Doctor is forced to regenerate by The Event he unleashes to end the Last Great Time War, this would put his new outfit into the character's storyline towards the end of his incarnation.

In the Big Finish continuum, especially at the end of the rather excellent Eighth Doctor Adventures range, emotions have ran raw for The Doctor. Faced with a massive personal loss in , The Doctor that leaves there is angry and shattered. Fans have filled in the gaps a bit, and have implied that this Doctor might very well be the one who turns on his own kind in the Time War (some Time Lord betrayal is in end of the Eighth Doctor Adventures), and there has been a bit of a wait to see what Nicholas Briggs had next for him...and now that the box-set cover for the new story arc, , has been released, let the rumor mills fly! 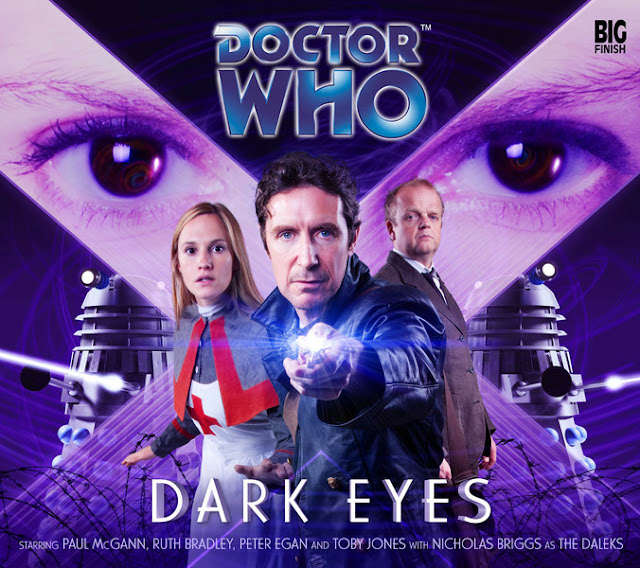 The emotionally scarred Doctor in the outfit fan-assumed to predate the events of the Time War, and there are Daleks? Well, damn. Well done, fan-gap-fillers-in. And there's the Dream Lord right there? Hah. Sorry, Toby Jones, I couldn't resist.

Except, well, there is no guarantee that Big Finish will ever be able to get right up to the LGTW—factoring in licensing rights and such—so at best it will probably be speculation. And then there is a little glimpse from the very first episode of New-Who, , that shows the Ninth Doctor wearing this: 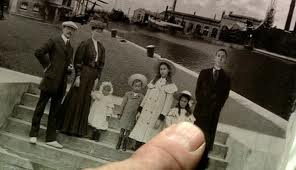 And while not an exact match, that outfit does look a whole lot like: 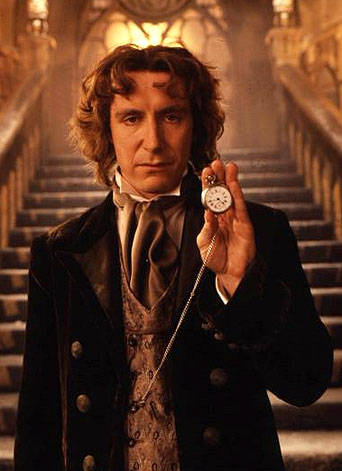 What's more, in the first episode, they are talking about Clive's website of Doctor sightings—which struck me as a flub because it could have worked in some background details, though at that time they were in bit of a flux about whether this was a direct continuation of Old-Who or sort of a sister series...—and that website, which which still semi-exists in a new form with a couple of photos under a page entitled Doctor Who?, Have You Seen This Man? including one that has couple of photos (under "Sightings"), one of which is in Sumatra in 1880 with an outfit almost identical to the new McGann outfit, and includes this link under the "Contact Clive" link, which is a mirror of the old website hosted by the BBC itself, and this bit:

Steven Hudson: I saw him a couple a years ago outside a new building development in Totters Lane, East London. The guy seemed really confused and keep muttering, "They're all gone, I'm the only one left". The man was either a complete loon or was drunk. Looking back I think he was probably drunk as he looked as if he'd been to a fancy dress party. He was wearing some old Edwardian outfit, not a leather jacket.

Note, that doesn't necessarily mean the old Eighth outfit, since "some old Edwardian outfit" can be a lot of things, including the First Doctor's outfit. But it does add up that in and in the side-info at the time, we were supposed to wink back to the past with these shout-outs, even if they were quick, non-specific, and could have been handled better.

But does the outfit even really matter? The Fourth, Fifth, and Sixth have at least two outfits each (Fourth changed out his original outfit in JNT's reign into an odd burgundy version, though technically he had worn variations at various times, such as Sherlock outfit in , while Sixey's Big Finish sometimes supported darker outfit is a bit more radical...and Number-Five's change was so subtle I just mostly take people's word for it). I'm sure the others have had minor changes. Such as Eleven, who occasionally has a longer jacket than other times. Maybe his leather jacket was destroyed in The Event and the Doctor grabbed a previous outfit, or a black Edwardian jacket of another build, before wanting to go back to leather? Maybe in his emotional state he tried on a few different ones?

I'm still excited. I think Big Finish is about to delve into the sort of Old-Who mythology that they are especially good at glancing at, and then blending it with a bit of New-Who philosophy in a way that will be spectacular, and outfit continuity be damned.