This is a first for Dickens of a Blog, I think, a cigar review. As many of you know, I'm a pipe smoker. Not a heavy one, but kind of regular. Like many of my pipe-smoking brothers (and rare sister), cigars have become the temptation next door (and several prominent pipe smokers and writers have been seen over in the cigar camp lately). Strong tobacco, fewer utensils to carry, and the "in" thing in a way that pipes just never seem to be. I prefer pipes to cigars, but I do like cigars, especially on the weekends or after long days, when I can sit back for an hour and a half and read or watch some bad horror movie and get completely relaxed. I thought I would add a few reviews into rotation (and I need to get back to reviewing pipes and pipe tobacco, too, which I stopped after my long list of early reviews got deleted). First up, La Flor Dominicana's Cameroon Cabinet #4. 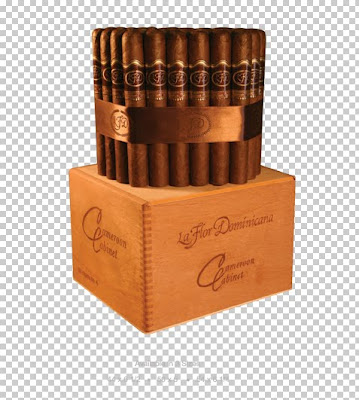 The LFD Cameroon Cabinet comes into three sizes. The #1 I'm assuming is the 44x6.5 and the #5 is the 50x5. I had the #4, which is the 54x6.25. All of them are an aged Ligero Cameroon wrapper (hence the name) with Dominican Binder and a Dominican and Nicaraguan blended filler. Overall feel and pre-light aesthetic is alright, a slightly darker cigar with a mid-tone smell. Doesn't feel like it would take much of a tumble, but not shoddily made. Just sort of lighter than other similarly sized cigars.

The smoking flavor starts out kind of an earthy sweet, maybe a hint of oak. Not a strong, dominant flavor. As it burns down, though, the flavor keeps shifting into an increasingly peppery blend and its strength picks up. The sweetness of the wrapper remains but it intensifies, at least through the first two-thirds (and I'll get to that). This is a common trait of most long-form tobacco, the way that the heat and char play off the more natural elements to create subtle hues and aftertastes, and one of the things I tend to look for in tobacco. It felt more developed here than most, almost like two cigars back to back. I was well pleased with that effect. Its burn is ok. Ashes alright with only a little bit of flake (and almost all due to the binder). The softness of body was prevalent in the smoke, my straight cut sagged more than usual due to the smoking.

My complaint comes from the somewhat uneven burn. Some sections would burn almost too well, zipping through them with lots of smoke. Then it would get to the next section and barely burn at all. I had to relight it three times to get the first two-thirds smoked. It relit well and quick each time but then it went out a third time and I had about a third to go (maybe less) and figured I would call it a night. It was late, I had had a long day, and I had the gist of the cigar in mind.

I paid about $10 for it at Vintage Wine & Cigars in Huntsville, AL's Bridge Street. Prices online look to be about the $8-$10 range. Box buyers make note that it seems to only come in a 50-count box, and those will run you in the $400-$500 price bracket. I liked the smoke, but factoring in its price would rank it somewhere around Good (+0.8) at best with the changing taste, from something like a Virginia sweetness to a more spiced tobacco, being my favorite bit. I have no intention of saddling myself down with 50 of them, though, and would maybe pick up one or two more before they are gone (and they are limited edition). I think I'm going to look for a #5, which should be a more compact version.