It begins with a British school boy, on somewhere that requires a ferry to reach, doing his school work at a kitchen table, surrounded by clocks. Then all the clocks stop. By the end, it has involves the boy and his sister, their missing parents, soldiers who apparently killed a little girl back during Cromwell's days, and three agents working on behalf of an unknown, but elemental themed, agency. Sapphire (Joanna Lumley*) and Steel (David McCallum)—the eponymous duo—are backed, eventually, by the large and jovial Lead. Each has his or her own power, though the exact limits of which are only barely touched upon, and they are battling unknown beings from the "Time Corridor" who have been kidnapping people for various unknown reasons. These temporal beings, represented in our world only as illusion and as pools of light, are using nursing rhymes to invoke past times in the house, and making those past times traps and doorways. It does not make much sense, except in a way that makes you think are almost, but not quite, getting the picture, and that is . 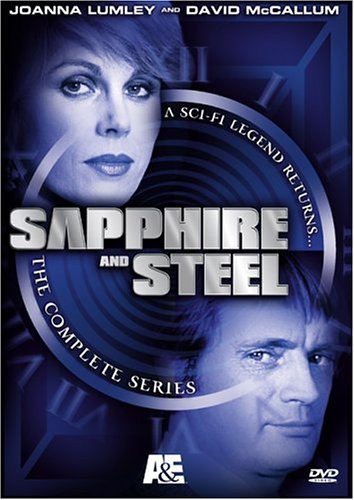 The show is different from what you would expect if someone said to you, "Ok, British SF, low budget, involving aliens and time travel [sort of]". We have a vision in our mind. If we don't zoom straight to , we might zoom to something like or maybe . This is not that sort of show. For one, the entire thing (the first assignment, anyhow) is shot in studio, and mostly set inside of a single house. The upstairs room has been infested by the unknown creatures. There is a kitchen, a first landing, eventually a cellar. A new study recently built. A second landing. That sums up most of the sets. You get glimpses of a country-side, though still a studio shot, and an old cabin, presumably where the house would eventually be, but those shots are slightly out of focus and dream-like. The majority of camera angles are never more than about ten or twenty feet from the characters, infusing the thing with a claustrophobic urgency, paired with the slow, inhuman way of approaching problems the agents utilize. Kind of uncanny, a bit unnerving, and definitely odd. It's a mixture to either pull you in, along with its talk of lurking things and elementally resonant powers; or, drive you away, scoffing at cheap sets and a lack of anything that might deem it science fiction outside of the discussions.

It has flaws. The little girl, Helen, played by Tamasin Bridge, regularly acts less human than Steel. Smiling at weird scenes, crying disaffectedly, speaking in a strange stilted lisp. Several bits of her dialogue are flat out ignorable (which is good, since they were so hard to understand with her "cutesy" voice). Steven O'Shea, playing the older brother, Rob, is miles better as a child actor. There is a couple of scenes where the monsters pretend to be the children's mom. Those work. One, the face is elongated by a shadowy blur technique. The other, her eyes are wrong and mis-irised. Both of those are creepy, but then most of the monstrous visitations are patches of light running around on the floor. Somewhat bizarrely, they don't appear to be just flashlight beams for cheapness, but actually superimposed after-fact unto the shot, meaning that they were intended to look like flashlight beams on the floor while being more difficult to achieve. Oh, and the wonderfully exuberant Val Pringle, while playing Lead, has a few scenes in episodes five and six where he is comforting young Helen, but her fugue-state eyes and his wide eyed grins transform it into snapshots from a disturbing after-school special. Staged and dialogued perfectly earnestly—Lead's speciality seems to be taking the edge off a situation and keeping spirits up—it still had a dozen ways it could have been shot less creepy.

If flaws are compared to pluses, though, the pluses will win. This a show that doesn't play by the rules. There are no easy answers. Good guys play by a different sort of ethics altogether than the people to whom they are being good guys. Flash and pomp are always underscored by menace. The utter sparseness of sets and scenes, sticking to one well realized house, adds to the flavor instead of taking away. Makes it more nightmarish. If they could go outside, then they could escape. The weird tension between Sapphire and Steel, and the odd not-quite-human responses of Lead...it's a lot of weird, good stuff. And the underlying evil, especially, comes out. About five lines of dialogue being changed would have set this fully into the horror category, but horror is another genre that it skirts around, borrowing from, but refusing to settle fully into.

I have not seen the other "Assignments", yet, but from what I've read, it appears they dropped some of kids-show traps: children acting as viewer-by-proxy, certain cutesy aspects. This can only be a good thing. I am curious to see how much they explain, if they do explain much at all, how it changes the flavor of the show. For now, I'll rank it Good and recommend it to anyone who read my description above and went "hmmm".

* For any fans: yes, that Joanna Lumley.