It is weird to think of books with no words as being literary, but the wordless novels of Lynd Ward count. There are plotted out, show structural themes and twists, have character development and pathos. The story is accomplished through black and white woodcuts [ink stamped by carved wood, allowing for single-tone images but often involving a number of shading techniques, see Wikipedia for more], with elements ranging from surreal scenes heavily influenced by silent films (see graphic below for a -inspired image) to stark, morality-tale pictures that would have been right at home with a book about the plague. Library of America's brings together all six of Ward's wordless graphic novels, along with some essays and an introduction by Art Spiegelman about the concepts of art-in-book and book-as-art [tossing in, of course, a little bit of whinging about the "death of the book"]. Base price is $70 (about $50 on Amazon). Page count is around 1400 over two volumes. The Ward artwork sections (as opposed to the essays) are displayed single images per page, right hand side only, with the left hand side blank. 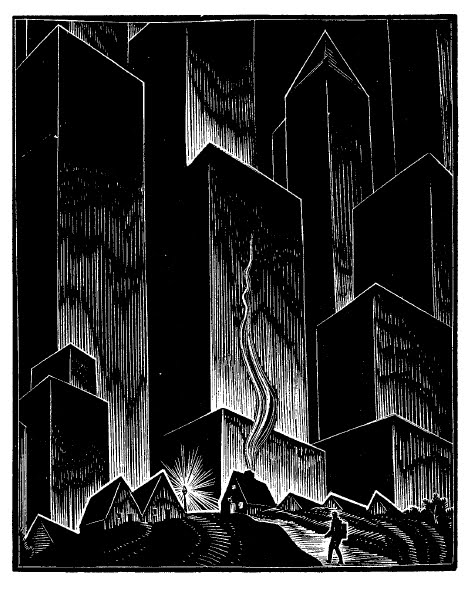 Just to highlight the capabilities of the wordless novel, we'll take a quick look at , the first of six. A painter on a stormy sea is surprised by the sun suddenly bursting from behind the clouds. He paints this moment of simple beauty. Later, after he gives his last bit of money to a starving man, he finds himself in a city with no food to eat and no way to buy it. A masked stranger buys the sun painting and offers a special brush, shown to have aided artists for centuries, in exchange for a contract [Doug's note: I said there were plots, I did not say they were extremely original.]. The young artist, still starving, takes the stranger up on the deal. He begins to paint images of the city's landscapes, and a less-than-scrupulous art dealer stumbles upon him and the crowds gathering around his art. Now the young man has a distributor. He gets more and more popular, and falls into the sins of the city: pride, drinking, debauchery. Finally losing his mind over what he has done, he is jailed after attacking a police officer, and later escapes the city to find a better life in the simple country-side. But then the contract is up and it is time to pay his due...

Ward is not trying to dig deep with this one. He was the son of a Methodist pastor and he went on to help several Methodist influenced political causes around the time of the Great Depression. He paints the story of a country innocent, not so much caught up in the debauchery of the city—or should I say, The City?— but mostly unable to realize what the debauchery of the city is until it is too late. He flees in the end, but he brings death with him. It is the inherent goodness of man hiding out under the sin, but only surfacing after depravity is reached. Modern readers might balk at the solution to all the man's problems being to find a quiet, blonde wife in the country-side. At least the ending brings the novel's only complex plot point: we can overcome our personal evils, but there is still a price to pay. Ward's artwork is the highlight throughout, some scenes being filled up wit imagery and concepts, and onthers focusing on only a couple. He is not in the same vein as some of the woodcuts most often displayed in textbooks and such, he opts for something simpler and more stark—more Frans Masereel than Gustave Doré—but there is still plenty of food for the eyes. A few pages fall into the narrative cracks, not quite making sense in the overall arch of thing, but the majority are more than functional. He takes a story that would have been a trite novella if written in words, and make it much more beautiful without them.

In something like a bonus, I came across this page on Lynn [sic] Ward from Texas Chapbook Press. Despite the name being wrong, it gets the number of wordless novels wrong, and claims the allegorical is "autobiographical". A lot of the pages on Texax Chapbook Press are humorous or counter-culture, but the bit about woodcuts seems to be earnestly written. Just an odd little side excursion.