A phone rings in the dark. A man answers. Finds out that his mom has died. His lover, presumably short term, asks what's wrong. The man explains. "That sucks," says the lover, "Can I borrow $20 dollars?" This is how begins, as written by Grant Cogswell and Daniel Gildark and directed by Gildark. A 2007 indie horror movie about Russel "Russ" Marsh's return home under horrible circumstances, and getting stuck in the quagmire that he fled many years ago. 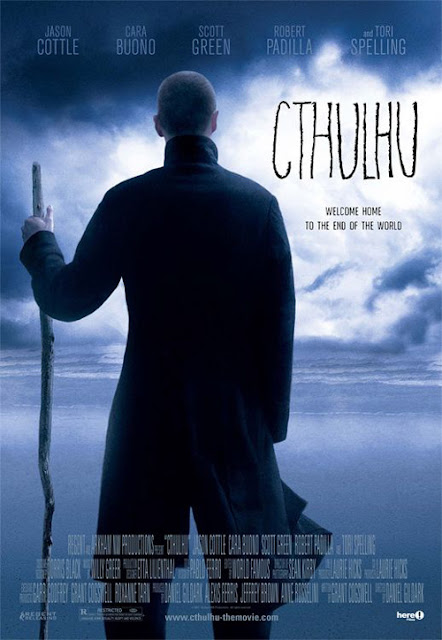 To clarify, this is not based off of "The Call of Cthulhu", which many assume. It is much more related to "The Shadow over Innsmouth"—name dropping a similar town/county, Rivermouth, and the Esoteric Order of Dagon as well as Zadok and some back story—but is also an original tale. In one drunken scene, Zadok tells Russ about the "shargath*", a partial reference to , which later appear to be these pasty infant-looking crawling things. "He caught something in his net...it looked like a giant baby!" A creature much more akin to something from Ramsey Campbell's dripping-down-below Lovecraftian horror than anything written by Lovecraft himself.

Once you align yourself to a modern spin on an Innsmouth tale, the movie's impact will vary on the viewer's mood and what elements the viewer latches onto while watching. Cogswell/Gildark spend much of their time hinting. Radio broadcasts talk about the last wild polar bear dying, of Eskimo terrorists, of a world in which violence and ecological disasters are so commonplace that outrageous, to us, news is treated as secondary and commonplace to the people in the world. Twice, something like white tentacles, strange brachen like antlers, are glimpsed by not seen. Something horrible in the woods, something destructive without shape. Childhood memories of distant shouts, things shrouded in plastic, are blended with a small town with unknown night visitors driving around, always wearing shades. It is a movie seen from the eyes of an outsider who is never quite looking in just the right spot. For some, this will no doubt frustrate and be passed off as lazy film-making, for others, it is a measured response to the sensory overload of recent horror movies. Again, impact with vary.

Especially since a fair amount of the impact is a lingering sense of environmental dread, which is always a laden topic for viewers, most of whom are pre-disposed to think one way or the other. Since the 60s, the Innsmouth sub-genre has had numerous stories in which the deep ones and their old religion are actually a pure thing, an embracing of nature as itself, and the horror derived from experiencing comes from the inhuman aspect of nature**. The movie does not spend a lot of time dangling this thread at the viewer, but it is clutched thickly in its plot. 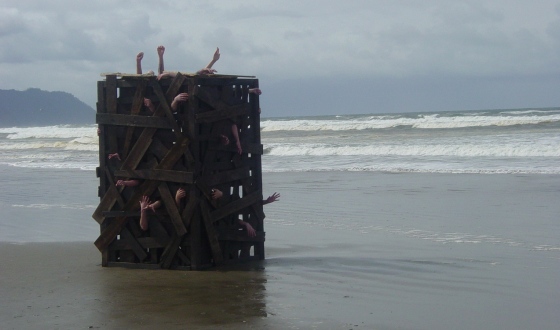 Much of this movie's fan response has focused on two issues: (1) that is not based on "The Call of Cthulhu" (which is kind of odd since it doesn't actually make that claim) and (2) the protagonist is gay***. Russel Marsh is a gay man returning home to a small town. Get it? Because something else Cogswell/Gildark have done is collude the sense of outsidedness, the sense of not belonging, of brushing up against a world you cannot be part of...with coming out to small town parents and dealing with small town attitudes about other lifestyles. That is actually a simplification of the process, and makes it sound agenda-laden, a claim that is both fair and unfair at the same time. Yes, the makers are juxtaposing being unable to tell the man you have loved most of your life how you feel with the encroaching end of the world. No, it never really gets preachy. The townsfolk are bad people because people have been dying while others have looked the other way. The fact that they made a son of the town a pariah due to his sexuality? That's secondary and the writer/director leave it as such. Hell, Russel seems to prefer it that way. It is flavor that exudes the entire piece, but could have largely been written out if needed. And yes, goddamn it, there is a youthful masturbation scene and a gay love scene (also a woman raping a man scene that seems hunky-dory in the eyes of 90% of the people decrying the first two...homo-sex = ewww, hetero-rape = awesome?).

Well, I say that it could have been written out, which might not be true. It is woven into the movie in a way that continuously moves the story through multiple levels. While you could retain one or two of the levels within the story about having the son come home to strange circumstances after his mom's death—think with deep ones and you have a perfectly heterosexual version—the unique blend of this movie requires all elements to fire at once. The creatures—I'll avoid calling them "shargath"/"deep ones"—that stalk the underbelly of the town look, kind of, like misbegotten infants and one element of plot involves missing children, sometimes down to the baby level, disappearing. The overarching nefarious plot is to bring forth things from the womb of the ocean. Tapping into the miscegenation elements of the Innsmouth sub-genre, and wrapping into the environmental elements in which the very life force around us, as we know it, are being destroyed and forgotten, the story is about a man who missed his destiny to carry on his family's genes for what is deemed, by many, to be a petty reason: sexual attraction. We are talking family names and fate and legacy, what does love have to do with it?

I also cannot help but think that using a gay male is a perfect way to modernize many Lovecraftian protagonists. Studious, artistic, generally non-butch men who have strong, passionate male companions. Who are overly emotional, cat loving, sometimes effete and disdainful of brutishness? While it is true that Lovecraft is tapping into the scholar-poet, the Byron-Keats (not that there is anything wrong with that), the modern version of a single male who is more into emotion and strong male companions than family tress... well, it is Russel Marsh.

Enough of that, let us wrap up the movie review real quick. Starts moody, gets moodier, and then reaches a middle passage that often only half works. Right at the point of breaking in two, seems to get its feet back and then launches towards a powerful ending that both shows us everything it needs to show and leaves out one final, crucial element (on purpose). While some fans and non-fans have been quick to say that of course it means this or that; it is really an excellent use of withholding the final piece to the puzzle just right.

Flaws derive partially because some of the bit-parts are acted so melodramatically. Take the scene with Zadok, as he goes on his rant: some of the lines hit and some are bouncing off walls and careening into the rarefied atmosphere and if you do not laugh, it is because you have made yourself complicit in the contract to not laugh at this movie's less-even moments. The epitome is reached, as is the movie's nadir, when Russ explores the strange dripping wall in the old net-shed and the old man comes forth to chase him. Russ runs up to a house, strangely lit by the snowcrash on a television set, and a young, blind boy sits there watching the noise. Right as the viewer is ok with waving away the oddness of Russ running to that house and being ok with being asked inside by such a strange lad, the boy talks about waiting for cah-thew-loo and some synthetic cymbals crash. It flips the whole scene into malformed pastiche and half ruins the soon-to-come revelations of the things in the dark.

All in all, a Good Lovecraftian movie with some flaws in a couple of tarnished spots. Not a direct adaptation to any particular story, and should not be thought of as such, but more so a summation of several elements, especially elements in the 1960s and 70s (and later) Innsmouth themed tales. As a strange aside, the captions are sometimes odd and off. In one scene, Tori Spelling's character mentions that "Ralph fixed the pool filter" (while the captioning says that Russ fixed it). Later, as the cultists are chanting "Ph'nglui mglw'nafh Cthulhu R'lyeh wgah'nagl fhtagn", the captioning informs us that they are speaking "Native American Language". A perhaps minor aside, but it did bring a wry chuckle. Finally, extras are non-existent besides a commentary, a trailer, and a photo gallery.

* Not sure if that's a drunken slur version of shoggoth, which are then realized completely wrong, or something new.

** It is perhaps most obvious when Susan and Russ are looking at the [caged] polar bears. She says that the bear would rip Russ apart in seconds, "but isn't it beautiful?"

*** In "Director Dan Gildark Answers Call, Explains His Cthulhu", AMC points out that some/many, without seeing the movie, also took to panning it because it is not set in New England (see S.T. Joshi's intro to to see why Lovecraftian place is best a byproduct of a given creator's own, rather than mere pastiche/homage) and because there was no big name stars outside of Tori Spelling (presumably these people all suffer from a mental disorder related to their mothers using strange chemicals while they were in the womb and misunderstand terms like indie and low-budget).