Hot on the hells of my quick review, here's the review to match. The game play is likewise pretty simple. You have a cup. Shake it up and then choose three dice at random. Roll them. Put all your "brains" in one pile, all your "shotgun blasts" in another, and retain the "running feet". Draw enough new dice to get back to three (including the running feet from the last round) and roll again. Keep going until you get three shotgun blasts, in which case you get nothing that round, or until you tap out and collect the points from all the brains. First person to thirteen total brains wins. 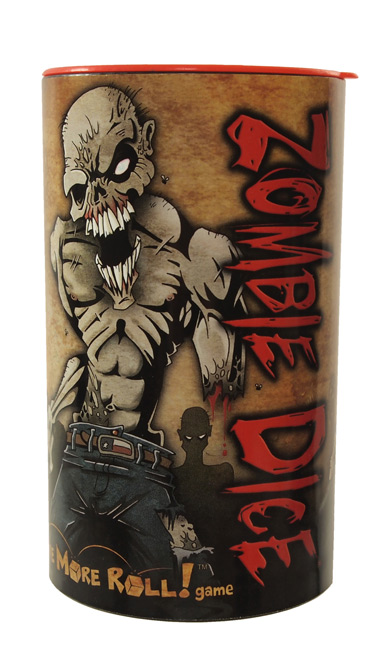 The variation in gameplay largely extends from the variation in the dice. Red dice have three blasts but only one brain. Green dice have three brains but only one blast. Yellow are balanced. Drawing a handful of red dice can greatly increase your chances of getting shot out in a single round. Not guaranteed, for sure. Plenty of times it was a couple of green dice with shotgun blasts that ended the greedy zombie. For those looking to add a little flavor to the game, by the way, call the red, yellow, and green dice "Daddy", "Mommy", and "Baby" respectively. Or maybe "Jock", "Chav", and "Nerd". Delight as you get one of each color in hand and get to take a shot at the whole family or to re-enact ...of the living dead.

Plays fast, with a surprising amount of outcome variation despite the overall simplicity. Really, it comes down to luck: you can get three shotgun blasts from any combo of dice (it just goes from 1:216 with all green to 1:8 with all red). Play the odds, though, and adlib your best "brraaaaainnns" jokes* or "Red light! Green light!" puns and have at it. It's a Good game. This one edges out its cousin, , at least slightly, as far as gameplay satistfaction goes. Both are quick "pocket" games, but seems to have a tad bit more staying power. With this one caveat: gets more complex and more "diplomatic" with more players. gets to be more about waiting for your turn. While is probably best for 3-6 players, should probably tap out about 2-3. Would be interesting to see if SJGames releases a few specialty dice that could be mixed or matched into the main pile. Such as a "run for help" dice that is mostly running, and the next turn automatically turns into a blast without re-rolling. Etc etc.

* Of course, this might earn my ire after a little bit, since only one zombie movie (of the old school, anyhow) has actually used the "brains" bit: . The fact that the one movie, which doesn't include head-shots by the way, has taken over so much of zombie lore is a pet peeve of mine. Since this game isn't resolved in a single headshot, I assume takes place in the zombie-verse.