Summary: This somewhat Southern delicacy looks a little weird but I like it. Take a pack of salted peanuts and pour them into a freshly opened Coke. Don't shake, just wait a minute, and then enjoy.

Peanuts and Coke. Quite literally what it sounds like: you take a pack of peanuts (salted, though others have other favorite variants) and you pour them into a Coke. If you are not from the South, you may not know that "a Coke" means "a Soda/Pop" but in this case, I actually mean "a bottle of Coca-Cola". I may be from the South and I may eat the strangest foods, but I speak like a Yankee most of the time. Now once you get the peanuts into the Coke, there are some variations. Some put them in only a couple at a time. Others dump in a whole pack, or two, and then shake it up. These latter people are absolutely silly and are doing it wrong. The former are ok, but that sounds like it would take forever and I might as well just eat peanuts while drinking a Coke. I won't judge if you go for the former, though. For me, I keep it simple. One pack of peanuts poured into one 20oz Coke after a couple of sips make room at the top. 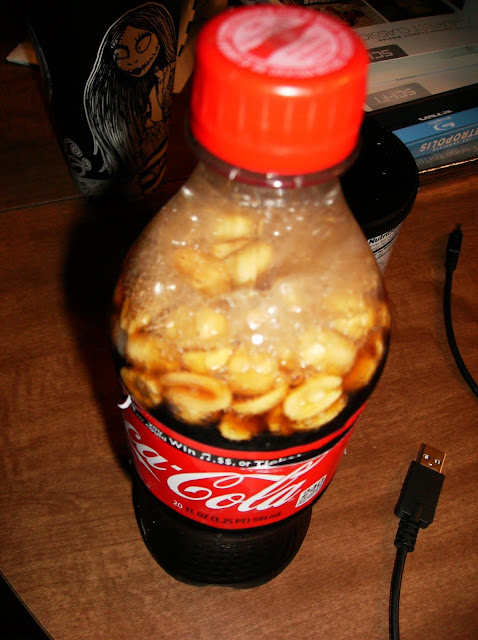 Now I say this is a Southern tradition, and websites like Marshbunny back me up, but I have to tell you, it's considered somewhat weird duck here, too [Doug's note, Here = North Alabama]. I would take this to school or to college, and people would stare. As far as effeciency goes, getting caffeine and sugar and protein all shoved down your gullet with the least amount of fuss, this is the King Drink. I also consider it something of a comfort food. I remember going to this po-dunk little "corner" store down highway 31 (it was at an intersection, but where a highway meets a county store isn't really a corner) and getting those little glass bottles of Coke with real sugar from a real cold from-the-50s style icebox and dropping in a quarter pack of Lance's peanuts, as much as it could hold. It was a good pleasant moment and even though plastic-bottle Cokes with their HFCS and chilled to a somewhat tepid temperature in what passes as a "Cold Drinks" machine is a pale imitation, I am not a wistful longer for the Garden of Eden. That paradise is come and gone. Unknown Kadath is just your childhood home and it will never rise again.

Back to those people who stare, I sometimes wondered if it was just the appearance? Or maybe the concept of food touching? Would these same folk, deep rednecks with square jaws and deer hunting trophies nailed to their panel-wood walls, also squelch as a bit of cream corn launched an assault against the integrity of their mashed potatoes? I do not know. I understand it more from my friends not-of-the-South or of-the-City, but in their case I assume they are assuming something foul, some heretofor unknown rankness buried under the peanut's unassuming mien or deep in the Coke's gustatory qualities that is only released in combination. The horrid key that unlocks the terrible door. Frankly, it tastes mostly like peanuts in a sweetly salty soft drink.

OTHER BLOTS THIS MONTH: December 2010