For submission to the Worst Cover for Otherwise Alright Weird Fiction Anthology contest, I submit Tales out of Dunwich

Summary: Tales out of Dunwich, with its sexy goth lady in leathers with creepy house behind is possibly the most out of place with its content cover I have seen in awhile. What the crap, Hippocampus?

For submission to the Worst Cover for Otherwise Alright Weird Fiction Anthology contest, I submit Tales out of Dunwich 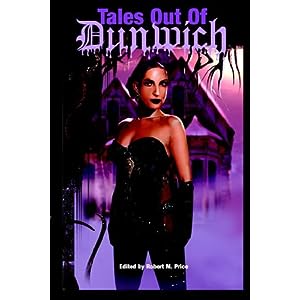 I wish I had a bigger shot of that cover. It looks...odd, off...bad...at the samll scale. It looks both sexier and worse at the same time on a larger scale. Hippocampus Press's , edited by Robert M. Price, features a few decent tales—I got it for Stanley Sargent's "The Black Brat of Dunwich" but was also interested in the novella "The Thing in the Woods"—and a cover that would not be out of place on a book called . And sure, we are talking about a story involving incest-implications and cosmic horror Yog-sexothery that became, amongst other things, the inspiration of a movie where Dean Stockwell both looks like, and acts like, one of those crazy New Age rapists your mom warned you about; but that cover seems to be stretching credibility. At least, in the full scale of the book itself, she's kind of cute and dark despite being so unbelievably out of place. Almost wonder if this was a trick cover or something for another book that was comissioned and otherwise not used? Or maybe there are some sexy times stories inside. Sexy, gothy story times. Um, I'll be in my room. Reading.

OTHER BLOTS THIS MONTH: January 2011