Summary: When a group of mostly friendly military types are presumed dead, they embark on a covert mission to unearth one of the C.I.A.'s biggest secret, an operative named Max: responsible for blowing their helicopter out of the sky and making everyone think they were dead in the first place. A mixture of testosterone, wit, infiltration, and violence, the two volume collection of the original thirty-odd issues presents the complete story arc for a quest doomed for failure. But maybe their enemies will piss blood in the morning...

If you have seen in movie form, you have quite literally seen a truncated, edited version of the source material. A PG-13 cut of a rated R franchise. Of course, the movie ended without the primary conflict being totally resolved and did an ok profit in theaters, so it is possible we'll get to see the rest, or at least a watered down version of it, but for right now let's just say you get some of the good bits from the first third of the comic series and not all of the grit and desperation that makes the original so compelling. , collected as a two volume graphic novel (as well as in a couple of other variations), tells of a group of well-skilled special-forces type soldiers presumed dead after they disobeyed an order given by Max, their then handler and agent for the C.I.A. who has sent them on covert mission. Except they were not merely left behind, but the direct target of Max's explosive ire. Back for revenge, they engage in a series of escalating heists, infiltrations, and violent confrontations trying to get to the bottom of their betrayal. Except Max has even bigger plans, and eventually enemies of their enemy become the only friends they are going to get. 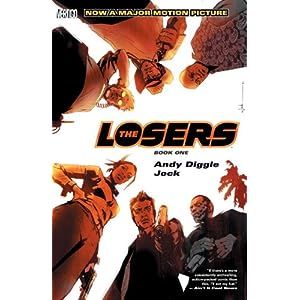 The lifeblood of is Diggle's ability to thrust pseudo-alternate history, though conspiracy minded folks will claim it is not alternate at all, and gritty covert ops into a comic book universe with meglomaniacal bad guys hell-bent on world domination and old agents dodging rocket propelled grenade blasts. Characters take hits, and occasionally are dropped by them, but rarely do they stay down long unless the hit in question is the hit. Death is a matter of storyline, gunshots are a matter of effect. Nuclear explosions, giant earthquakes, and internationally woven, decades old conspiracies play out in the two volumes. Bookended by the gruff faces of the harried Losers and the humming anger of betrayal and double-cross stacked on top of betrayal and double cross.

Clay, the single-minded leader of the Losers, makes a interesting main character, as far as this book has one, and is ably aided by Aisha, the angry Middle Eastern warrior woman with a psychotic penchant for keeping the ears of her enemies. The two burn with a degree of passion, but the whole time their central passion is a shared desire to rid the world of Max at any cost. Most fans will probably be more tuned to the wavelength of the three stooges: the hacker Jensen, the pilot Pooch, and the sniper Cougar. While Clay and Aisha burn with hatred, their back-up team are humans who want to right a wrong, but mostly want to have a life worth living when it is all said and done. Diggle delights most in the antics of Jensen, with his blonde spiky hair and occasionally overly earnest face, but astounds more with the quiet desperation of Cougar. Not often does he say much but is a stand-in for the heart of the whole series.

This is a rough ride of a comic, though, and somewhere before the two thirds mark has begun to feel a bit drawn out. Everyone has been shot or at least shot at a couple of times and recovered in the unseen moments inbetween issues. Plots have been uncovered, higher ups have come out and done the betraying thing, and more than once. As a three-year stretch of comics it could work. As a read-in-two-hours pair of graphic novels, you start to feel a little bit overwhelmed by the flashing bursts of high intensity followed by witty banter. Probably give yourself some time to take breaks between major story points for full effect. And, if a handful of plot twists are explained away in perfect detail, try to not feel too let down.

Summing up, the violent but witty storyline gets a strong Good, even with a few negative points to bring up. It is a war comic that is also a comic of low-powered super heroes, and Diggle delights in putting them through their paces. If, by the end, you get the feeling the Diggle is torn between torturing and setting them free, almost angry at the lot he put them through, well, you wouldn't be the only one to get this vibe. Very enjoyable, though, and easily one of the best proto- (sans magic) styled things out there. Recommended.

OTHER BLOTS THIS MONTH: January 2011