Summary: Luzianne releases their pre-made Southern style tea in a 96oz (and 16oz) bottles. Makes a claim of being made with spring water and cane sugar, but how does it stack up? Not all that well. The ups and downs inside...

For about five dollars, give or take, you can get 96oz of Luzianne's Authentic Southern Iced Tea, Sweet Tea flavor. There are also flavors like Raspberry, Lemon, Green Tea w/ Mint and Diet Peach. They are all made from, and I quote the bottle, "pure spring water", cane sugar (those that have sugar), and 100% Natural Brewed Tea. I only have the "Sweet Tea" variety, but it also has "tea essence" and natural flavorings, citric acid, and ascorbic acid. The color is more a dark amber than a proper black tea brown, but we'll not worry too much on the appearance of things. 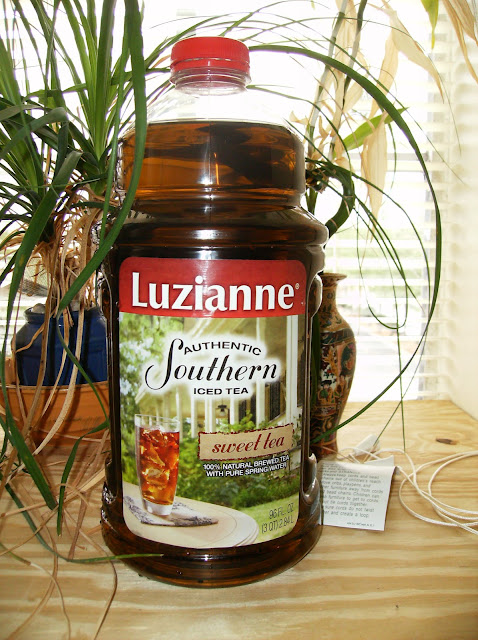 Flavor-wise, though, I start checking out of an already iffy hotel. Weak on tea flavor, and less sweet than most Southern style teas, the absolute king note is the citric acid. Despite this not being their "lemon" variety, it is still fairly citrus, especially past the initial taste. It comes across as a high-quality instant tea much more than any quality brewed tea. The cane sugar's full roundness never shines through and while I do not know what Luzianne's special blend of black teas are here: I am guessing there is a reliance on out-of-season Ceylon, because it has all the red flags of that subtle maybe-floral maybe-nutty flavor but less so...

The first weird thing I notice in the middle of drinking it? The caffeine content. Black tea, roughly, has about 40mg per cup. Iced tea varieties, which are made anywhere from 1/2 to maybe 3/4 strength, therefore have about 20mg to 30mg per cup (as proof of this, Milo's Sweet Tea, which is good Southern style tea, has 28mg per 8oz, see: the Milo's Tea page on caffeine in their product). Luzianne's Sweet Tea variety has only 12mg. That explains the "tea essence".

Another weird thing is the ingredient list order. While I am under the impression, as is the FDA, that ingredients are listed on the label in the order of their predominance, the first and perhaps only actual, ingredient listed is a catch-all for brewed black tea, which is then broken down as spring water, black tea, cane sugar, and then some others [that order]. There are 70 calories of cane sugar per 8oz serving. Assuming 15 calories per teaspoon of sugar that means there are over 4tsp of sugar per serving. There is no way that black tea with only 12mg of caffeine is going to have greater than 4tsp of tea (the 40mg per brewed cup is a single tsp). There is trickery afoot.

The final verdict? I feel this is harsh, but factor in the fact that you pay nearly twice as much for three quarts of this than what you would for a gallon of actually authentic pre-bottled/jugged Southern style, I'm assigning this one a Blech. Hopped up food buzzwords—spring water, cane sugar ("No High Fructose Corn Syrup!"), 100% natural, etc—a lower than normal calorie count (70kcal < 90kcal) and decreased caffeine count (12mg < 28mg) expose this as a product meant to compete as a nominally healthier option compared to bottled-by-soda-company teas like Nestea (with about 80kcal) and Lipton's PureLeaf* (with about 25mg of caffeine) rather than actual Southern style tea contenders. There is a market for it, sure, the sort of person who only buys tea in a bottle, likes everything to have a lemony aftertaste, and wants to walk around with something bragging about its spring water content while simultaneously being sugary and flavored. People who have heard of nutrition classes, but never really found a reason to take one. Skip it, tea drinkers. Leave this to the soda refugees and supermarket impulse buyers.

* Even the Luzianne's product page for this, homely titled FindYourFrontPorch.com feels a little like it was made to go head-to-punch with Lipton's PureLeaf site.

OTHER BLOTS THIS MONTH: February 2011