Summary: A painting of a man riding a horse past a house provides a 19th century glimpse into the Monte Sano community long before Huntsville as we know it was formed.

When you head up Monte Sano State Park, you can pass through a few spots marked as "home sites" and such, but really you are just looking at patches where houses once existed. I'm not sure how old the various structures remaining are (by structures, I mean the houses and such that are complete) but I am under the impression that the oldest of the structures, something like a proto-Huntsville, are all gone. So, getting a chance to see a painting of that era is a neat surprise. Painted by Henry Strode, born 1830, it shows a man on a horse riding past a house. You see some cows and trees, and not much, but dammit, every area needs a Birket Foster of its own. Looking at the high quality version on UA's servers allows you spot a woman and a man standing on the front porch. 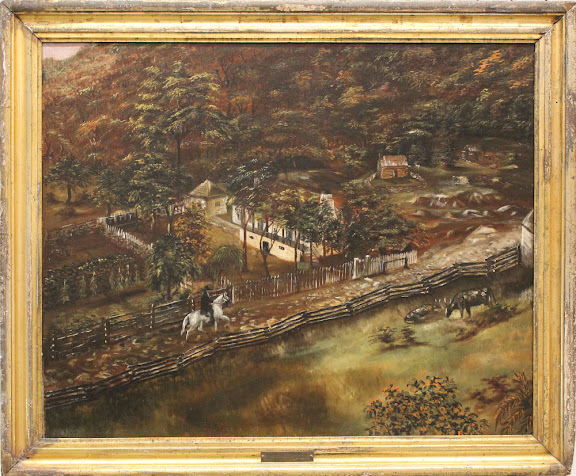 Unfortunately, though, the article is a bit unclear on details. Strode was born in 1830, but when was this painting made? When does the scene taking place in it fit? It is hinted that it would be a scene remembered from childhood but painted later. Missing a bit here or there, but still a good read.