Bring change for the toilet or phone because your boss lady can't be bothered...

Summary: A book from the 80s offers advice for how to handle your new boss lady (presumably it is aimed at guys who have been 'surplanted'). Tips include don't light your boss lady's cigarette, always bring change for her to go to the loo, hail taxis for her, and something about not ordering for her but you will get the check?

Bring change for the toilet or phone because your boss lady can't be bothered...

Admittedly, I've only seen the snippet of Boss Lady's Arrival and Survival Plan, by Jo Foxworth, that Awful Library Books posted this morning. That snippet piqued my interest. Partially because it seemingly comes from a "boss lady" type. Partially because the advice glimpsed is a time capsule of sexist humor tropes that might have been used in a 1970s movie on this subject (a man getting a boss that is a woman). Partially because it has advice written about on par with those semi-random nonsense robo-spam posts you get on Wordpress blogs. Some samples:

There may be a feminist or so around who would miss an important appointment or commit a nuisances on the rug before accepting [change] from a male escort but any Boss Lady worth a lunch hour has more pressing things on her mind that quarters and singles.

I love the phrase "feminist or so". I also love the idea that a feminist will take a crap on a carpet before accepting change from her male coworker [Hell, yeah, sister!]. What's with the "worth a lunch hour" line? I assume this means there are Boss Ladies who aren't worth a lunch hour? If your boss asks you to lunch, does he or she have to be worth it? Is there an acceptable protocol for going "Well, chances are you are going to flub the Johnson account, and Jenkins will replace you in a month, so I'd rather go to lunch with him."?

And don't act as if she has destroyed your ideals of womanhood when she expresses herself via some of the "in" language. Maybe she hasn't played as much ice hockey as you have but she's seen as many movies...

Ice Hockey? Women learn cuss-words from movies? Via the "in" language? What's going on here? 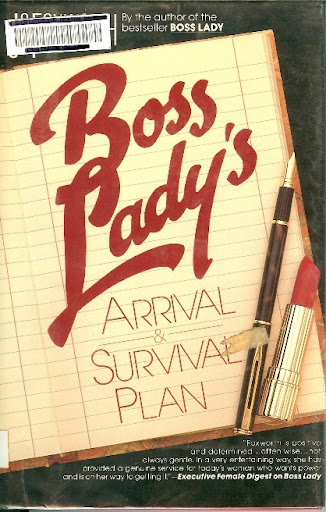 Anyhow, I'll lead you read the whole page that was scanned in if you want. Something about why you shouldn't try and light her cigarette [fake lashes set on fire apparently smell like a Korean bordello] but you should try and hail a cab for her [Boss Ladies are assumed to be bad tippers, so you should hail her a cab and then get into it first...something called the "New Etiquette"]. Sure, this may be a page of misconceptions that Foxworth is setting up to knock down, I don't know. I'd have to buy a copy for that, and I don't think I will.

If you are curious, not only can you see the book on Amazon [Boss Lady's Arrival and Survival Plan], but you can see other books by Jo Foxworth, such as Boss Lady: An Executive Woman Talks about Making It, The Mistakes Women Make in Business and How to Avoid Them, and The Bordello Cookbook: Food with Passion. There is a murder mystery, as well, which makes me wonder if there are two different Jo Foxworths.

Here are some fun facts I dug up about "Jo" after writing the above. She was born in 1918. Broke into advertising in the 1950s (i.e. The Mad Men era with all the fun chauvinism). Became one of the, if not the first, female ad writer for companies like Hilton Hotels and Coca Cola. In 1968, formed her own company. Her writing career would have started around 1978 and looks like it was focused in the 80s and early 90s. She was inducted into the Advertising Hall of Fame in 1997. How's that for a fun bit at the end of the insanity that started this post?