Summary: I have been playing through Doom lately, the de facto first person shooter of the early 90s. A game I have never played all that much, but am enjoying now. I am also listening to doom metal, and looking at doomingly sexy books about libraries, and I don't know, stuff.

My first memory of would have been circa 1995, via SuperNES. I had a friend, Charlie, who was a big video-game nut and played them all the time. He brought it over, I gave it a whirl, and sucked at it. "You have to strafe!" I remember him shouting at me, but that was a language I did not understand. Even when he explained and showed me, my brain did not know how to think in terms of moving back and forth, turning left and right, and strafing left and right. Making that work as a glorious whole. This meant I could not get very far and so I missed out on what most people saw in the game, and what many others complained about.

The first first-person shooter I ever fell in love with was (also via Charlie), even though it is not the same. The next was , which is the game that finally made me understand the glory of strafing. Then I went on to favor 3DRealms' outings more: and . I still miss . I did play and beat it: a, to me, technologically brilliant but bland game. Still, was something I would occasionally fire up a demo of but never play more than a couple of levels. 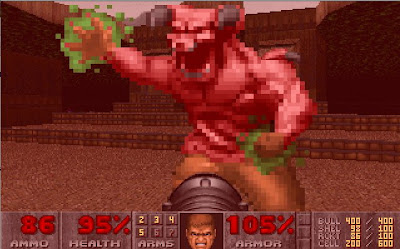 Now I am playing through it, the majority of the game I am seeing for the first time. And I am digging it. For those who know the rough genre but not the specifics of , you are a space marine stationed on Phobos (i.e. moon of Mars). Something evil starts coming through the gates, and so you have fight your way through hordes of monsters to try and find a way out. You end up going through a gate to Deimos, which disappeared before the troubles hit Phobos, and it turns out that it has been corrupted by an even greater malevolent force, the game which started out with brick and metal walls starts having stages of meat, blood, and giant walls of tortured souls. Even though the game is horribly pixelated by today's standards, the general atmosphere is still effective,and I can get why some parents freaked out a little about the imagery. I can also understand why I saw it listed as one of the best horror games of all times on a poll, once.

I guess I am about 3/5 done. Most first person shooters I have played from the 90s devolve into a series of back-and-forth mazes and key-hunts and I am getting to that point, which I never quite enjoy. I only finish them after that point because I have put a few hours into playing them and might as well. When I get done, I think my next FPS might be to try and get emulated on my Mac. I have a couple of different versions, I bet I can get one of them to work.

By the way, in honor of this post, I am listening to some Doom Metal: Electric Wizard's . For the first time ever, I have payed attention to the lyrics and you get such gems as

I am the Zodiac, I am the stars,
You are the sorceress, my priestess of Mars,
Queen of the night, swathed in satin black,
Your ivory flesh upon my torture rack.

We are about 4/5 through National Library Week and I have done nothing to celebrate. There are some fun-and-games going on UAHuntsville's Salmon Library today, but I guess having the day off means I missed them. How about this, I'll just leave a couple of covers posted by Awful Library Books this week (click to go to their entry for them): 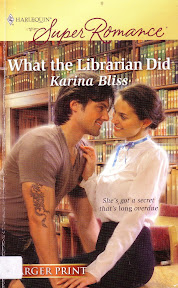 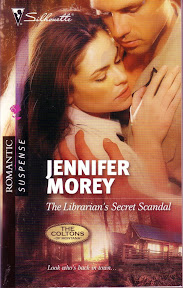 Hmm, I prefer the one to the left. Somehow the tagline of "She's got a secret that's long overdue" is much hotter and naughtier than "Look who's back in town". Plus, the one of the right seems to feature a strong-faced heroine out of an 80s made-for-TV movie and a log cabin while the one on the left has hotty in a room of books with a tattooed rock star giving her the lean in. I am tempted to try and find that one for reading. At least slightly.

As for everything else? Not sure what is all left. I have about three weeks left in class, and three big assignments to fill those weeks. I think everything will be ok, but this weekend and next week need to be crunch times for me. I also have to figure out how exactly to pay for my summer tuition, though I have most of it covered in savings, I guess. Outside of that, I've been keeping to myself a lot lately (well, to myself and Sarah) and have largely felt most of the days have been...a bit...I don't know, unfilled and disorganized. Even my leisure seems to have fallen down. I'll need to pick that up.