Summary: Black Sunday, or The Mask of Satan, or La maschera del demonio, is the full directorial debut of Mario Bava. Not super heavy on gore, nor sexuality, it nevertheless gained some notoriety for a few of its shot (a bodice ripping, a face hammering and a melting). What it is heavy on is atmosphere. In some ways, a failure of sense and dialogue, it still is a pleasant black and white horror study of demons, family curses, old castles, and things that are not quite but are almost vampires.

In the opening shot of , Mario Bava's 1960 gothic horror debut, Barbara Steele's Asa is tied to a post and is repudiated by second oldest brother, marked for burning alongside her paramour (and older brother? cousin? someone from the family, though possibly by marriage?), Javuto. She has the mark of Satan burned into her skin so God will not be fooled, and is then forced to wear the "Mask of Satan". Which is a bronze, gruesome mask with spikes inside that is hammered onto the face of witches. Or vampires. The movie seems to cross the two into one. As men with black hoods watch the young beauty bleed out from the wounds, the audience is mostly brought into the scene by sparse, moody sets with minimal cues for background and place. 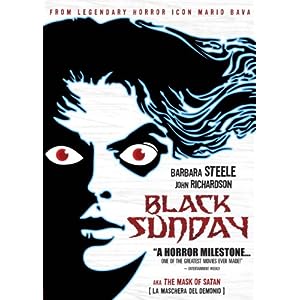 200 years later, a pair of Russian doctors are traveling to a conference but after a wheel coming off the axle derails them, they set about exploring some ruins. Here they find Asa's corpse, mask still in place, held down by the power of the stone cross over it (the burning of her body was foiled by a sudden storm). After an attack by a [largely unconvincing] bat, the older doctor breaks the cross and then, in what might be hubris, decides it is good idea to not only grave rob from Asa but to remove the mask itself. They travel to a nearby town, but before doing so meet Princess Katia (also played by Steele), Asa's great, great, great, great, etc niece. 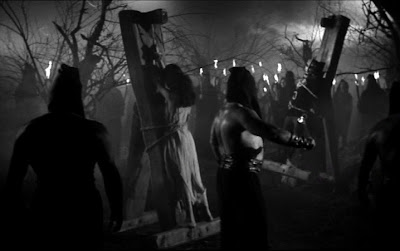 As the plot develops, the family curse, cast by Asa right before the mask was hammered on, starts to come to fruition as first her father, and then others around her, end up dead by Asa and Javuto as they seek to drain the essence of Katia to bring Asa back into existence (and I suppose Javuto gets a free pass, or will stay undead). Of course, the younger doctor, Dr. Gorobec, played John Richardson, starts to fall for the lovely Katia, and we get a bit of back and forth with priests acting cagey and locals acting a bit torch-and-pitchforky.

One of the chief things to keep in mind is that some of the dialogue and sense from scene to scene is dropped in favor of atmosphere; atmosphere largely provided by stark black-and-white sets with little on them but the bare minimum to make things feel dark, claustrophobic, and isolated. The move runs about an hour and a half, and probably has the momentum for about 2/3s of that, but if you pay attention to the good in it—the use of trees to stage shots, the quick glimpses of well-done special effects, and the gothic mastery of flavor—you can probably forgive the maudlin sweet piano rills that accompany the young doctor and princess whenever they are in the room together, half of the time with her bodice oh-so-slightly ripped or unbuttoned. And if lines like "I know its hard for you" are destined to be a double entendre, well, I'll drink to that. 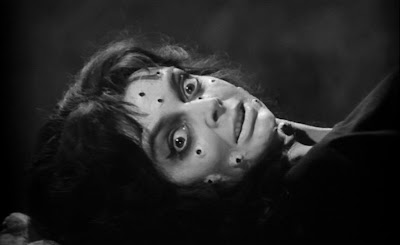 For fans of Bava, gothic vampire tales (even if the vampires in this case do drink blood, they rarely play by vampire rules outside of an utter aversion to crosses and fire), and old horror movies. Not a lot that makes it feel, say, like an Italian horror, it is much more akin to some of the second-run Universal Studios productions. Some great shots for effect, including the well-done Asa/Katia transformations, round out the piece.

Final score is a Fair movie with tidbits of near greatness in it.