Just what the hell *is* the Kitchen Ghost?

Summary: I sometimes refer to the Kitchen Ghost (as does Sarah and a couple of our friends). Just what the hell are we talking about? Well, it is something like a series of weird events humorously named. That, and probably a soul sucking demon waiting for us to lower defenses...one of those.

Just what the hell *is* the Kitchen Ghost?

First off, there is no actual Kitchen Ghost. Not really. If you come here looking for real life tales of the supernatural, you might have to leave disappointed, unfortunately [but see link in the tool-tip of the picture, it might be of interest].

Secondly, while reading this I highly, HIGHLY, recommend you open this link up in a new tab and let it play: Exuma - "Mama Loi, Papa Loi". It will not only add a certain ambiance to your reading, as well as a bit of gravitas, but it is frankly one of the most bad-ass, haunting songs you will come across ALL. DAMN. DAY. I can't help but picture an opening scene from a zombie movie as a group of survivors walk across a dawn lit field while this plays. Woo. At any rate, thanks to @ImbolcFire for mentioning it the other day. "MAMA LOI, PAPA LOI...I SEE FIRE IN THE DEAD MAN'S EYES!"

The first encounter with the Kitchen Ghost, and what earned KG the name, was probably around 2005. 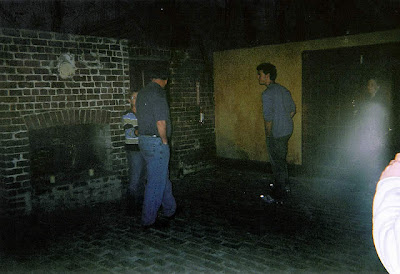 It would have been before we converted the mid-sized bedroom of our apartment into a library. We have three bedrooms. Two are along the same outer wall as the kitchen, with the medium on the right side, the small bedroom in the middle, and the kitchen to the left (as facing inwards from the outer wall). At one point in time, we did have books and a study/gaming table in the library/study but I/we tended to read in the smaller bedroom, which shares a wall with the kitchen.

One night, I was in there reading and I could hear some heavy knock sounds on the wall behind me, against which was the futon where I sat. We have an older apartment, so settling was a likely culprit, as was our self-defrosting fridge (it likes to make popping noises while doing the self-defrost bit). Still, the way the knocking was sounding, like it was right against the other side of the wall and trying to get attention, I went ahead and walked around to the kitchen. If nothing else, it could have been the cat messing around behind the garbage or something.

Except when I got there, I could hear the same steady knocking sound coming from the other side of the wall again. As though there was not someone sitting in the futon I had been sitting on before and knocking from in there. Meaning it was coming from exactly where someone who was sitting on the futon would have knocked most casually. And that was the birth of the Kitchen Ghost, the ghost who lives in the wall between the kitchen and the [now] guest/craft room.

The next major event, at least that I recall, outside of various clicks and bangs and other noises, was seeing something reflected in the TV screen. It would have been evening, right around sunset or so where it was dark enough in general but some light was coming in through the kitchen Window. The way our apartment is laid out, the kitchen doorway (there is no door) is about right across from our living room door, with our living room being something like an open area as you first come in. We put the TV against the wall that separates the living room from the main bedroom, and so light from the kitchen often catches on the TV and can lead to glare and such when the show is particularly dark or, in this case, the TV is switched off. I was on the phone, sitting in the couch, when I glanced up in the reflection of the doorway I saw someone standing there in the fading light.

I kept watching and as the light faded, so did the person there, and at no time was there ever actually anyone in the doorway. At this point, I think I started talking about the Kitchen Ghost outright, and officially every weird thing that goes down in the apartment (like the week our phone, near the kitchen, called my mom a couple of times) is assigned the KG label. Strange flashes out of the corner of the eye? Kitchen Ghost. Something moved from where you think it should be? Kitchen Ghost. Feeling something crawl in bed with you and then rolling over to see nothing there [by the way, this was an "actual" event, and I thought it was the cat, but upon rolling over, the weight that had been on my back was gone and there was nothing there to show for it]? The Old KG.

I do not think there is a Kitchen Ghost. I assume the knocking noise was either settling or our downstairs neighbor being kind of loud in the middle of the night and the sound came up through the walls. The person in the doorway? Well, Sarah has some old silk stitchings of Geishas hanging in our living room, and what I think happened was a strange case where the light from the doorway happened to either reflect off one of the paintings, or due to the curve in the TV screen, showed up strangely about the same place, and so resulted in a super imposing of the two images. The ghost cat/child sized thing crawling in the bed in the middle of the night? Clearly a demon come to drink my soul my out my ears.

There you go, though, that's what I refer to as the Kitchen Ghost. It is our catch-all name for UAEs: Unidentified Apartment Events.

BONUS: If Kitchen Ghosts are not scary enough for you, or the weird sounds of Exuma didn't get you in the right mood, how about this: A fungus that makes ants bite down (and unable to let go) at noon, so that it bust forth from them and grow on the leaves of the forest floor at night? Sweet dreams.

Dougisms, On Me Being Something of an Odd Duck