Why did HuffPo pick such a bad/weird photo of UAH? Presumption of taking the piss activated!

Summary: HuffPo released it's 13 Colleges Still Accepting Applications article, which is strange. Except it's not so much an article as a weird slide show. Evidence? See UAH's photo.

Why did HuffPo pick such a bad/weird photo of UAH? Presumption of taking the piss activated!

When you get an article named 13 Colleges Still Accepting Applications, and you find that it is a slide show of images showing off 13 out of 293 colleges that are still taking applications (293 out of I don't know how many), and it was written on Friday 13th, what's your guess? Is this a shit article designed to get clicks (and only to get clicks)? Is this an article implying those schools are unlucky or, well, shit? Are these just random selections? Or, were you the poor sad sap who assumed something like "The Best Colleges Still Taking Applications" was implied? Take a look at the photo from UAHuntsville: Mmm, the back of the Engineering Building. Nothing says "Great Value with Class" like the back of a building with a couple of scraggly pines. The other schools have occasionally odd shots (including slight obscured or out of focus ones) but nothing as poor as using an odd shot of the ugliest building on campus to represent the campus as a whole (of course, since some honest to goodness work goes down there, it actually isn't a bad representative outside of aesthetics). I did a basic traipse around Flickr, Google Image Search, and Bing Image search and didn't find anything, so maybe she got it from a stock photography site or really, really searched for that pic to give a certain "ambiance". By the way, Rebecca Harrington, if you want a photo showing off how doomed UAHuntsville is, you should have went for the totally rad tornado in the background pic: 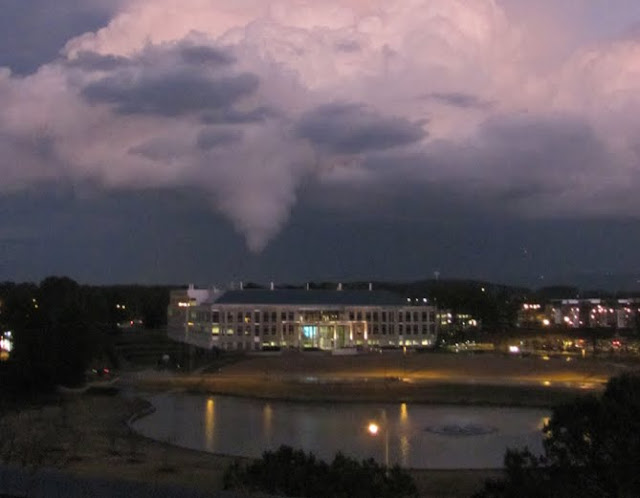 Ah well, at least you get the bonus humor of all the people snarking about the colleges and how they are all crap, which leads me to think that a bunch of people either a) paid too much for college and now hate themselves or b) stopped going to college in the third semester because Business Math was so gosh darned hard and are now simply hating.

If you click the "University of Alabama Huntsville" tag, the second news story associated with it has the headline: "Alabama University Recovering a Year After Shooings." Emphasis mine. Why, that makes it sound downright pleasant.