What's the most awkward personal situation you have ever stumbled across that did not involve you?

Summary: We are a social animal. Some people take this to mean that things like break ups, break downs, and so forth need to happen in public. What's the weirdest, worst, or most awkward you have ever experienced?

What's the most awkward personal situation you have ever stumbled across that did not involve you?

Today's Dinosaur Comic (click that link or see a smaller version below) is about witnessing other people airing their dirty laundry in public. Sometimes people break up, or breakdown, or blow a fuse, or simply decide to fight it out right there in the public eye. I know that most of things are put into motion by events that occurred after they have entered the crowd, meaning that people are not usually doing this simply to fight in public, but then again...there are people who talk much louder on their cellphones in crowds than they do at home. And that is telling. There's a reason that reality TV makes bank. 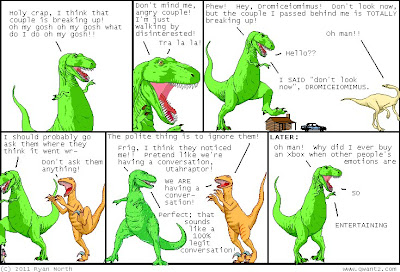 What's the weirdest, worst, or most awkward of these you have ever experienced? I've been trying to recall. When I worked at Book Gallery, which was at the top of an escalator and for some reason that was deemed a "loud cellphone conversation hotspot", I would hear regular idiots shouting into their cellphones (these idiots were nearly always the sort that hold the cellphone about half a foot from their face, jack up the volume on the speaker phone, and shout). Several would have fit into the question above, but that has been a bit back. Ditto for working at the calendar stand, which was a kiosk and so a natural spot for people to gather and do anything but buy product.* A few days ago, in the library, I heard a loud cellphone conversation (or well, half of one) in which someone said, "You better get right with Jesus!" in tones that suggested a threat. Libraries are weird places to work to overhear things, because 90% of people know that a library is a quiet-ish area and 90% of the remaining do not know this but at least are following everyone else's lead most of the time. That last 1%, though, will air any and all dirty laundry in a volume of voice that can only be described as "outside appropriate" while walking through the stacks, or surfing the Net at one of the student computers, and so forth. Still, this happens so rarely and most of them I chuckle at but forget. I cannot recall specifics.

I also live in apartment. In the past year there have been a few loud middle of the night sort of fights (mostly involving two repeat offender apartments). Apartment living is weird for this, and while you do have some divas that are out there just to be out there, I think there is some cognitive dissonance where people think of standing in their own front door and screaming at the person they just kicked at as being "at home", rather than now thrust out to where every one else can hear. One of these neighbors has had the cops called at least once, probably more than once, and has had the glass of her patio doors busted out at least twice. The other neighbor often engages in irony, meaning that half of his scuffles have started because he tells another neighbor that they are being too loud.

The weirdest, though, happened recently when I was going to get a quick lunch in the middle of my last grad school semester. I was kind of bleary eyed and walking zombie style, when I came across a wall of thick cigarette smoke. A guy and a girl (rough guess of age, based on voice because I sure didn't look was about 19-22ish) were chainsmoking and having it out. There were a few words traded in kind of an ugly voice, and a door slam (not sure what was up with that since they were both outside, maybe someone else was trapped inside and getting angry?). The culmination, though, was as I walked by I heard her say, and this is not exactly verbatim but is the primary gist with all the keywords intact, "Don't give me shit about the shirt, I was the one who spent the night in jail!"

You know what, I hope they made it.

* Favorite exchange, to this day, was a bitch who walked up with her cellphone into the middle of the kiosk where I was standing. I asked her if she needed any help, not in any sort of obnoxious way but, "Did you need anything?" and she proceeded to stand there and glare at me and go on about how I was so rude for interrupting her private phone call. Not to me, mind, but to whoever she was talking to one the phone. She never once actually talked to me. Which I mostly let go but part of me wonders what breaks in a mentally underdeveloped person's head that makes them think that shouting into a cellphone in a mall counts as anything like "private"? I would assume some recreational drug use on behalf of the mom when she was in the womb, but that would be ugly to people who do recreational drugs while pregnant.