io9 on the ten different shows that Doctor Who has been

Summary: Doctor Who has mostly survived due the concept of reinvention, io9 discusses how this extends to the show concept itself.

io9 on the ten different shows that Doctor Who has been

has been on the air for something like 34 years, give or take, and has had a fairly active outpouring of content for almost 50 (during the non-televised years, there were still novels, comics, and audio dramas bubbling up, often featuring original cast and crew and/or written by the same people who had worked on the show itself). One of the things it mastered early on was reninvention, and this is probably the core of its success. 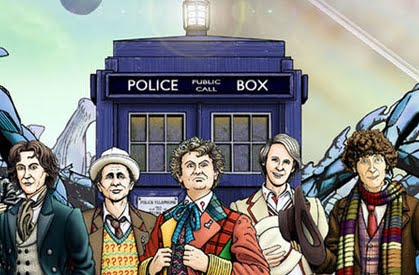 After Susan, the Doctor's granddaughter, left at the end of the 10th serial early in its second season, this opened the doors to a changing roster of companions (Barbara and Ian, the other two of the original three, left a few serials later). Which helped to focus the show more strongly on its central character, the Doctor, rather than his "team to be educated" as the early stories chose. Once the central character became stronger, he became an every-hero*: smart, brash, brave, fallible, sometimes too quick to anger, weird, mysterious, and often a bit overly strong for his frail frame. Soon, the Doctor himself changed—through what would later be called "Regeneration"—seemingly into another man, while keeping core traits and memories. The TARDIS changes, the recurring monsters change (Daleks and Cybermen, for a time, were improved after every encounter though budget or fear of too widely drifting designs eventually reeled that in), and—as io9 points out—the very nature of the show changes:

Around the time Tom Baker took over the lead role in the mid-1970s, the creative team got very interested in gothic horror, and started openly plundering everything from Hammer movies to classic gothic literature for story ideas. There was a Jekyll-and-Hyde-with-antimatter story, there was a Frankenstein story, there was a Manchurian Candidate knock-off, and there was even a sort of Day of the Triffids shout-out. And all of it was very, very violent. And bloody. The amount of blood that found its way onto the screen in this era would give people a fit nowadays. Oh, and strangling. An awful lot of strangling. Oh, and did we mention drowning?**

* And since about the time of the Sixth Doctor, though earlier incarnations had it as well, a bit of an anti-hero when needed.

** Interestingly, they don't mention the Doctor killing a man with poisonous gas released from acid as he did in one episode, while still trapped down below, which makes me think he did it to just be a jerk.