So Tyra Banks had a show about the Tape Worm Diet, and...

Summary: ...I don't think I can do TV anymore. At least not the kind that doesn't come on DVD and has both skip and pause buttons.

So Tyra Banks had a show about the Tape Worm Diet, and...

Tyra Banks has a show. Ok? I know nothing about it but I vaguely remember finding her to be attractive at some point in the past. Which is not to say that she is not attractive, now, just to say that at one point there was something she was involved in and I especially found her attractive. This was a decade ago. Memory fades. So, Tyra Banks has a show and on that show there was an episode about The Tape Worm Diet [note: As of now, that link does not work, but it is the link that the show's website claims will send you to a recap, so presumably it will one day work...or, at least...you will be saved from knowing more than you currently know...]. It had such promising moments like an actual colonoscopy showing the tapeworm climb around in someone's guts and a woman who claimed that she was not scared of the tapeworm diet because she had been on a diet where she went without alcohol, for an entire month, and I guess these are equivalent to her? Says a lot, really... 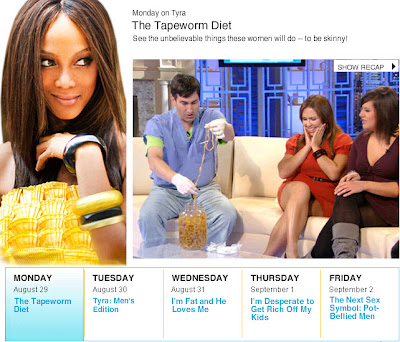 I did not watch this episode. I watched about four minutes of it. Three. Maybe only two and a half. I am unsure. I saw the colonoscopy with something like fascination and then bailed when the woman being referring to "30 days without a drink" as proof she was not scared of extreme diets, quiet literally I turned it off in the middle of the end of her sentence. That says as much about me as it says about her, I think. In the middle there was an attempt at pathos when Tyra scratched herself and said such things made her itch and then she gurned for the camera. I can imagine how this episode went. They dug down into the wet, rotting horror that is everyday depravity and then, in a short speech at the end, tried to pretend they were concerned with redemption by having Tyra tell the girls on the couch that they were too beautiful for such bodily terrors and torments, and the audience full of leering women with mouths agape applauded and the false lights diminished and WHAT ROUGH BEAST, ITS HOUR COME AT LAST, SLOUCHES TO BETHLEHEM TO BE BORN?* Sorry, I digressed.

That all as may be, I have learned one important thing: I think I have gone too far. Too far from daytime TV and, based on a few attempts to try this or that popular sitcom and/or variety/reality/game show lately, possibly from even the coveted Prime Time. I do watch TV: TV that comes on DVD or as Digital Downloads and which allows me to stop, pause, skip, and rewind as needed. Television, though, as hatched in the fiery ether and channeled down long pulsing veins of cable or through dripping digital antennae on someone else's beat as though they had no more need of Skarl and were unafraid to wake MANA-YOOD-SUSHAI: I cannot.

I thought, once, that maybe whatever raw lacunae in our lizard brain are ripped open so that commercials can be absorbed, can tempt, and can breed covetousness in us had scabbed over in me without regular doses of re-injury, but that is only a portion of the picture. It is not just the commercials, but the rhythm and flow of television itself, as networked and broadcast. I cannot take it, simply can't. It is shite. Ugly stinking piles of triple thick tripe miles high and eons wide. There is more hope and despair lost into the cavernous brink of a single brain choking episode of , in a single false mask of human mockery across [Insert Name of Barely Relatable Man-Child]'s face, than it took to paint the Sistine Chapel. It is an edifice to our time, our own Tower of Babel, and it is an abattoir of dreams, a slaughterhouse reeking of the refuse of all that is good and horrible in mankind.

I can do PBS, which is to say that when I get home from work and PBS has this or that documentary on about the quirkiness of day-to-day life, I can watch it, and feel better for having watched it. I really need to start donating about twenty bucks per paycheck, though, because if this late-night public television was lost I would be stuck in an apartment with a dead set, the sky above tuned to an unwatched channel.

Since it is really unlikely that television as a concept has gone this far downhill in the handful of months since we [Sarah and myself] have had anything like "real TV", my one and only guess is this: TV is a drug that has certain addictive qualities that causes it to override certain safety features in our brain. Once we get into the habit, we crave it. We plan our lives around which shows are on when, sometimes months in advance, and lament when a show we want to watch is moved to a slot where we cannot normally watch, and we choose between life-at-large and whatever penny-opera is dished to use in twenty-three minute segments plus commercials. Like drugs that we have learned to let go, though, there is a resistance to getting back into the habit.

I have been too long without the addiction and therefore, like choking down that lung burning first few return puffs to smoking, I am resisting it. In my case, without a way to really dive back into the habit, this is as far as it goes. Once or so a week a brief spattering of television that does nothing to endear and that is it. To continue the smoking analogy, all I get are those coughing fits and none of the other benefits. It seems the ultimate outcome of this is to push me even further from watching any more television [see, well, this entire post].

And this is ok, I feel like a person who has swapped poems post-caesura, changed a ditty to an ode, an apparent stumble transformed to structure. And I feel not one bit diminished by my lack which, well, may not be a lack at all.

And for anyone who rolled their eyes during this post, two final things. First, try going without TV for a month. Cold turkey. Then, after than month, sit down at lunch time and try re-entering the world of the habitual television watcher. Secondly, you might get a kick out of this McSweeney's article, which is counterpoint to everything I just wrote: An Open Letter to TV Snobs.