A Vonnegut volume was released by Library of America. Not everyone is thrilled...

Summary: Kurt Vonnegut's inclusion in the Library of America makes sense to me. First off, I like his works (some more than others), but more than that, I think it makes for an important mode of American letters (the sarcastic uncle, more or less). Others disagree...

A Vonnegut volume was released by Library of America. Not everyone is thrilled...

I was in the process of searching for the contents for Vonnegut's Novels & Stories 1963-1973 (LGT: Amazon.com page where the cover comes from) when I found D. G. Myer's "No on Vonnegut". Myers does not favor the inclusion, listing Vonnegut as a purveyor of "midcult" and listing Vonnegut beside Steinbeck and Lewis as mistakes in the Library of America canon. 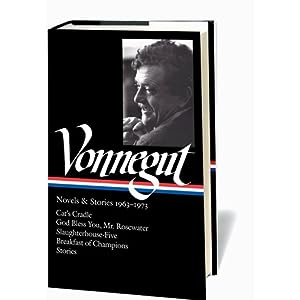 I am not behind this aspect of Myers's argument, that the style of writing that Vonnegut embraces is unimportant to the posterity of American letters. We are a country of fairly plain language. It can be playful, but its playfulness is a bonus rather than an automatic lacking. Something about the American baldness of words appeals to me. Not all of the time. I also like complicated word choices, games, and labyrinths. I can only read a couple of boringly worded books in a row before I start to choke and need something more. Demand more, because American wit can be buried right in the everyday. Demand a good story and and good voice. It is not impossible.

There is a certain form of conversational English embraced by some American writers, the avuncular cant, that is fascinating when done correctly. Vonnegut has that voice, even when he stumbles as plotter or drives his point so far into the ground that you begin to suspect he is engaging in irony and/or self-mockery. He has certain core truths that he wants to make known (to semi-quote, semi-paraphrase: "You try. You die. Life is. People in power rarely take this responsibility seriously. Goddamn it, you got to be kind."), and all the playfulness is never to be thought of as hiding or obscuring them, and that is its own frustration: his novels could regularly be boiled down to only two or three pages, starting with a thesis statement and concluding with dick jokes. But still, his weird glimpses into dialogue, in which their very plainess makes it feel wrong, the way he buries some ideas half way through or introduces others as though the book grew in a petri dish and who knew where that came from, and the way that broken and naked thoughts sometimes escape words that did not seem to originally contain them; I am really glad to see that the Library of America is including him.