The Things I Put in Jars [aka Pickling Habaneros, attempt 1, part 1]

Summary: This weekend I pickled about a pound of habaneros. Now...how long do I let these things sit?

The Things I Put in Jars [aka Pickling Habaneros, attempt 1, part 1]

If I was a hobbit down in a labrythine cave, separated from my dwarf friends, and I came across a slimy, big-eyed fellow with a penchant for word games, maybe I would ask, instead of questions about things in my pockets, "What do I put into jars?" And the answer, if the slimy, frog-in-his-throat bugger would have to give, if he wanted to win, would be: "flaming death". To wit... 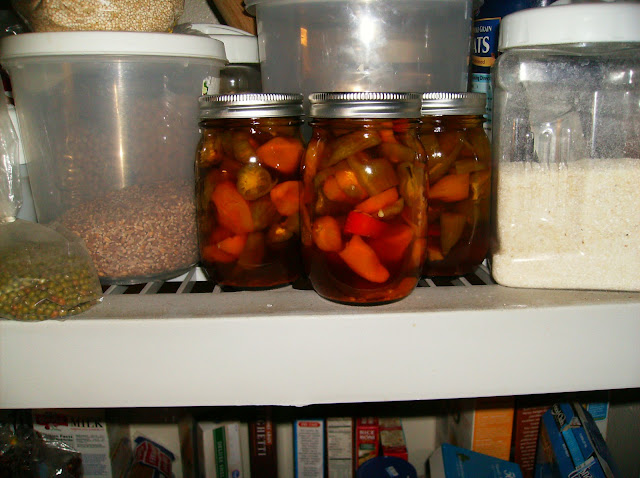 What you see are three pint jars with about a pound, maybe a pound and a half, of habaneros—with seeds because all those recipes that implored you to remove seeds are written by wusses—inside a broth of vinegar, water, and salt (in that order). There are also about a dozen jalapenos chopped into the mix, a few cloves of garlic, and—to explain the ominous red color—a few pinches of paprika. This might be a hot—pun intended—mess but hopefully, and only time will tell, a tasty one.*

Why? Because the oil on my hand, a trophy earned from chopping the habaneros, was so strong that after washing my hand three times it still was hot enough to make any food that came in contact with my hands—mostly a handful of cherries we ate later that night—spicier than what many places would call "flaming hot" in this United States of Pansy Hot Stuff Eaters. When I handed one off to Sarah with an absolute minimum of handling, to avoid such a thing happening to her, it turned out to be so bad that, like a communicable disease of food, it was almost too painful for her to eat. Again, this is after I washed my hands...three times.

It even burnt my hands after the soapy water spread it around. They feel, 24 hours later, like I touched a hot stove. I still can't touch hot things without it hurting a lot. All that heat is pickling, storing, mutating with a vinegar-brine catalyst, into something potentially unknown in my personal life: a level of heat I plan to consume and yet of which I am afraid.

Who's up for a habanero opening party in about a month?

* Nearly every article I read on the topic involved a fair amount of sugar and/or a large amount of sugar, on top of things like onions and sweet peppers. I have had that sort of mix, and strikes me as a middlin' relish—cloying, even—rather than a proper pickled pepper. When I get done, though, I might find that without sugar, it is a bitter death with no redemption. Time will, as said, tell.