I have been a pork skin fan from a while back. No idea how old I would have been when I first had a go at them, but it could not have been too old. Over the years, bag for bag, I have probably stuck to the standard type: fluffy, semi-golden, mostly air, and with a hint of red pepper.

My mom, a couple of times, got the cracklins and baked them into bread and such, but mostly I have not had much of a run in with more authentic ones. I live in an apartment, do not have a deep frier nor a proper grill, and though I do know a store that sells pork skin as nature intended, have no real way to indulge in fresh cooked suchwhats. Instead, I've gone after finding the best bagged pork rinds, skins, lumps, cracklins and so forth that I can. I had been enjoying a few fried cracklin varieties as of late, but was getting tired of my teeth feeling like I had chewed rocked after crunching through a handful.* I needed something a little softer, maybe more crispy or chewey than crunchy, but hopefully not that mostly air variety you often find that is more crisp than bite. And, well, I have a current winner: 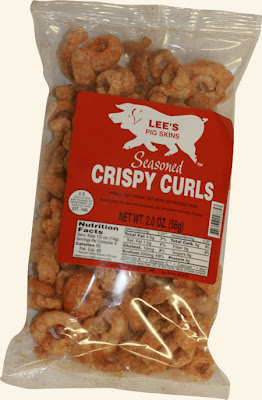 Pictured is Lee's Pig Skins brand Seasoned Crispy Curls. In texture, they are close to the mass bagged sorts but overall presentation is better and it has a nice, relatively non-complicated ingredients list. Notably, the bag packs a punch. Good strong red pepper whiffs kicks in with a properly seasoned snack. It is hard to eat about three in a row without needing a little cough as the heat and flavor catches you in the back of the throat. Fantastic. My one complaint, as much as it is one, is that I would like there to be a few more "cracklin style" chunks but maybe I'll grab a bag of Lee's wash-tub style cracklins and toss 'em together.**

I don't shop a lot of grocery outlets here in town—town = Huntsville, AL—so they may be kind of common, but they do have some at John's Big Brother (just West of Jordan on Holmes).

And if anyone has other suggestions for pork skin pleasure, I am game to hear them.

** Which seems dangerous, and likely is.