TMI post. Or, why the fook does my right arm-pit smell like the Doom that Came to Sarnath?

Summary: While I would never, ever, consider myself a connoisseur of armpit smells, something has gone wrong here.

TMI post. Or, why the fook does my right arm-pit smell like the Doom that Came to Sarnath?

First off, I don't know normally talk about bodily fluids nor, outside of double entendres, really about bodily functions in general. Bear with me for a bit...

Secondly, as an American, I know I am prejudiced against body odor, or as we like to call it: bee-oh. We say it with a sneer. We really do hate it, for whatever cultural reason. In polls, you often see body odor listed as the second worst turn off, coming in behind obesity, and let me just say, from personal experience, that fat people seem to find love a bit easier than stinky people.

I hate calling it stinky, in the same way that it is stupid to call any natural state that is sometimes/often considered a problem—hairiness, acne, oiliness, sweatiness—by too terrible a name. In a world where cosmetic surgery is becoming a statistical norm, it is not a surprise that people consider the human body merely in a beta-test stage, but still, I give leeway to things that come out of us simply because we are alive.

Despite my best intentions, I cringe a bit at body odor and it often comes right down to primitive flight or fight reactions. I smell another man's stank and all of his pheromones or scent markers or whatever hit me and I think: "I have got to beat the shit out of this intruder in my space!" or "That dude is going to beat the shit out me for intruding on his space!". As for womanly body odor, the feministench, it mostly comes in two kinds: either the bit that lets me know she drank an unhealthy amount the day before or the kind that smells, you know, sort of stinky-nice. My nose brain is seriously under evolved. And horny.

Normally my natural body odor, even when a tad strongish, is a chocolately-earthy smell. I wouldn't say it would be award winning, just that as musks go it is not a bad musk. In a long line of musks you might even pick it out as relatively pleasant. In musk-friendlier countries, I could waft it around to attract mates, and all that. I wear deodorant kind of sparingly, wear very little antiperspirant types of things, and in exchange my body never seems to try too hard to punish me. Doesn't feel like it has anything to prove. All in all, my musk says, "This is a stand up guy, the sort that might hold you close and protect you in his friendly arms...also, a fine lover."

For the past couple of days, though, my right armpit has been releasing a musk that says, "This man is a serial killer...also he punches nuns." I could not try to name this smell. If smell-o-vision monitors were a thing, I could actually demand money from you in exchange for not posting it. It is something...acidic. A yellow smell. Like what you might expect a small child's fever to smell like. Which makes me think it is a thing rather than a horrific new chapter in my life. I have some thing and that thing is making this thing, the stinky thing, the thing that terrifies me. Terrifies me because while it is my own arm's pit and presumably, some non-Euclidean bodily fluids notwithstanding, my own stink and yet my reaction to it is a fight or flight response. My lizard brain does not know this scene, does not get this plot twist, and thinks we need to beat the crap out of this character who was only introduced late in the narrative. 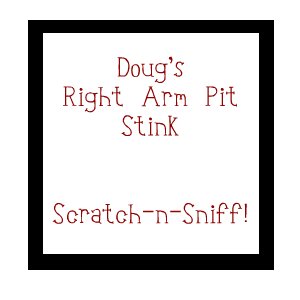 Um, should I be concerned? Is this a sign that my internal chemistry has so tipped that bad things are all the only possible result? Is there such a thing as pit cancer? If so, is this smell so atrocious because it is caused by it, or is it a byproduct of my body trying to cure it? Does this smell good in angular space but horrid in curved space, and the Stench of Tindalos has somehow made its way into my underarms? Did I accidentally find someone else's armpit and pick it up by mistake? Should I fill out a missing person report for my right armpit's normally more pleasant funk? Might this be a byproduct of drinking tequila, beer, more beer, some rum, some vodka, and some gin in a 24 hour period, while eating too many snacks?