In which I review...Boogie Woogie (2009 Film about high priced art and assholes)

Summary: The film Boogie Woogie is almost entirely passable, despite being well acted and having a few moments of splendor. How skippable is it? Even I considered the nudity unnecessary. Yeah...I know.

In which I review...Boogie Woogie (2009 Film about high priced art and assholes)

Watched with Sarah tonight, it was that or , and I think I should have voted Team Dinklage. I saw the trailer on some DVD or other, and I thought I would love it. I somewhy assumed I would immediately glom onto the world of high-priced art as commidity and the fun that sexy broken people have. I...no. 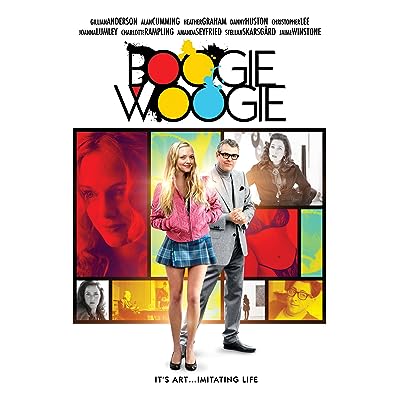 It has breasts. A few pair (not including those on a computer monitor). One pair of which is owned by Heather Graham, and another of which is large and bountiful. It even has a kind of shadowy cock hiding in the background of a scene, to keep it a bit balanced. It has a couple of feigned blowjobs, one of which involves Gillian Anderson. It has art, the kind of art you fear is being churned out with your tax dollars just so it can make rich people absolutely delighted as they drink wine and buy and sell it as a distraction from the sex and cheating and drug abuse. Except it seems to hate the art it has or maybe I am making up subtexts. I don't know. It has scenes. And lines, by Crom. People speak lines in scenes. It has all that.

At the end of the day, it feels like they shot a much longer movie and then got rid of half it because no one would sit through three hours of that. What's left jumps around and mostly finishes what it starts and mostly paints a complete picture, which is kind of a miracle of really random, shuffled cutting. Alan Cumming, as Dewey, is appropriately heartbreaking while Danny Huston and Stellan Skarsgard, as Art and Bob, are appropriately sleezy. Danny Huston effects this fake laugh throughout which is probably the star of the show, the single most convincing thing, and you will hate it because you are supposed to hate it, and that I think is as much as a review as you need.

Mostly recommended to those that get into the high-priced art scene, who like to watch rich people self-destruct, who love watching shallow people act like bitches and bastards to one another, or who will sit through anything for a glimpse of Heather Graham making out with Jaime Winstone. Other reviews, positive ones, try to paint it as a cynical masterpiece but I don't think that's the right word. A movie like this, if it tried to have more heart, it would have become preachy; if it tried for more cleverness, it would have smarm-overloaded. Something is missing. Even when you have such honest gems as one character selling off all of his art before a divorce, "Because money means nothing," those are not enough to save together this ensemble of scenes and bits pretending to be a whole.

OTHER BLOTS THIS MONTH: October 2011