Summary: Tom Baker's Fourth Doctor, which is often identified as THE Doctor of the classic era, explored many themes of mythology and godhood the 15th season acts as sort of a microcosm of his entire run.

If you were asked to discuss the era of where the Doctor's tendency towards developing godhood—at least his tendency to being an ineffable being that showed up to set things right or at least as right as he wanted them—was most in the forefront, you would probably drift towards Sylvester McCoy's tenure as the Seventh Doctor. And this is mostly right. Episodes like and are all about the Doctor showing up as a quirky little unknown figure to root out insidious evils you don't even realize he is hunting. 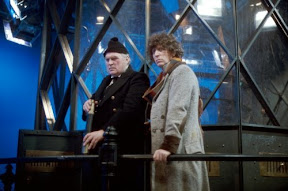 This is not even including those like , , and where the concept of the Doctor fighting ancient, recurring evils in much the same language as one might describe a Medieval incarnation of Satan. However, back in the era of the 4th Doctor, ideas that had bubbled up in earlier incarnations—the peace keeper aspects of Pertwee's Third, the over-thrower of oppressive forces of Troughton's Second—began to take on a fairly particular flavor. As early as , the Doctor is altering the development of a new species, and in his final story, the Doctor regenerates after saving the Universe. Things definitely had grown a bit more grand and epic.

We have bits of Doctor-as-godlike all throughout Tom Baker's reign. Both of the stories above for starters. The Doctor confronts an evil at the edge of existence in (though you would be right to suggest that some degree of misunderstandings are involved),

kills a man through poisoning just to facilitate a final showdown against science gone awry in (the one that shows previous incarnations of the Doctor that are probably un-canonalizable or represent something else), is there at the beginning of life on earth in , confronts mythology in multiple stories (, , , , , etc), and so on. In Season 15, though, we get a bit of all the rest in summarized form.

The season starts with , which can be easily taken as a simple horror-tinged story. Then again, you have an enigmatic stranger showing up in the middle of the night. He prophecies doom to follow while confronting previous legends. In order to survive, you have to accept his pronouncements as he gives them, even if they make no sense to you. Most of those who die do so due to greed, disbelief, or dishonesty.

In , the Doctor is literally used as a force to wipe out infection. In , he fights against corporate greed. More to the godhood point is

, which combines with to describe man's creation by extraterrestrial interactions. And then you have , where the Doctor shows up on a ship of Minyons (go ahead, say it out loud), a race who once worshipped the Time Lords as gods. Despite his claim that he is no god, the Doctor makes obvious demands upon the crew. At the core of that story is the concept of the Doctor's travel into the literal Underworld, where he confronts a shining being as corrupt and pointless, to bring out the seeds of creation from a Flood [the liquid quality of the planet is its first given desciption]. This being, it stands to point out, managed to keep a race alive for thousands of years through cool logic, a race that would have likely wiped itself out if left to its own devices. Nevertheless, we get both direct references to Greek Mythology (Jason and the Argonauts most strongly) and to Christ descending into Hell to bring the sinners out. The Minyon crew are both Argonauts and Angels, wearing white and silver to contrast the demonic black and browns of the guards down below. 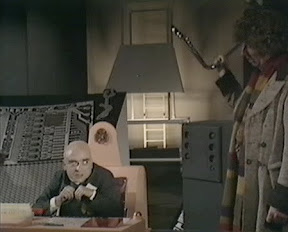 It is not just the story arcs, but the force of Tom Baker's delivery. He regular tells the "lesser" beings what to do, with those not following him dying on the sides. In he walks into a research building and immediately gives orders. Later, his primary act of mercy is to slide one of the "disbelievers" a gun so that said disbeliever can take his own life. Interesting as note, includes another instance of the Doctor shouldering a rifle to shoot at a threat approaching (see also ).

This all culminates into , with the Doctor as an utterly unpredictable force of power, demanding fealty from the other Time Lords and punishing a lack of loyalty. A god amongst gods who demands not only observance for his ineffable proclamations but then allows evil to happen for the greater good. Look at the other images: a crown that burns/hurts the wearer (the Gallifreyan Matrix as a crown of thorns), a key [to heaven] that also acts a source of destruction for lesser beings, and the Doctor's office being surrounded by gears and wheels and cogs (a celestial watchmaker, so to speak).

Of course, while this story is exploding the mythology of the Doctor as a character, it is imploding the Time Lords. The powerful race of beings hinted at from through the end of Pertwee's run are now minor bureaucrats in their own schemas. 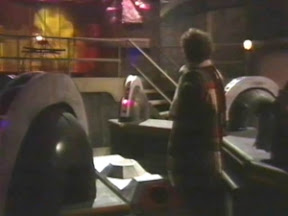 They have made themselves pointless, refusing to be involved with anything. The second/third most powerful Time Lord (after Borusa and the absent President elect), the Castellan, is a toad that would rather abdicate than confront.

Because of these two things, the next season—Season 16 was the "Key to Time" story arc—was necessary. Not only did we have to rebuild the Doctor, just slightly, as a being that is not all powerful—in this case he takes orders from a being that dwarfs the Time Lords—but we had to rebuild the Time Lords by having a competent Romana show up. A sassy, noble Time Lady, she gives the Doctor a bit of hell (though often has to be saved, etc, like most companions). According to the information text with , Graham Williams had wanted to keep Leela on, and I can see why. Her "noble Savage to the Doctor's indecipherable Gentleman" was a good mix. However, Romana was probably the most needed companion in the history of the show at that point in time. One who helped to put things a bit back to rights. 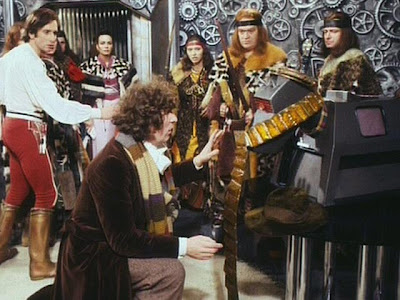 In this context, a more "Troughton-like" Fifth Doctor, a bit more humble man who seems to be in it both to do a bit of good and to be a bit overwhelmed by the Universe, was also desperately needed. If only Colin Baker's Sixth Doctor, as a Shakespeare quoting pompous ass more Time Lord like than pretty much every other incarnation, had been given a chance to bloom (though he has in Big Finish's run of stories, the BBC's lack of love is felt). As for the godhood, Steven Moffat is keeping it alive in well. At the end of the last season, we learn the "first question", the most dangerous question in the Universe, and of course, it was the one asked since the very beginning...of the show [no spoilers, I promise]. And just think, had the show gone off the air during Pertwee's era, it would probably have been resurrected much closer to a James Bond in space style premise.