Summary: Right off the high note that was Genesis of the Daleks, we get the other robotic menace, Cybermen, in a much lesser adventure. Here are the five worst oversights plus something I thought were cracking fun.

Coming back from a pre-Dalek Skaro (well, newly Daleked Skaro) at the end of , the Doctor-and-crew Crew show up back on the Ark, now known as the Nerva Beacon. The purpose of the Beacon seems to be to lead travelers around a new Jovian satellite, Voga, and in general to direct Terran spacecraft through the Solar System. The crew has been struck down by an unknown plague, however, and a small group of survivors hangs on. Life is about to get rough for them as two alien species concoct strategies that put them right in the middle of scorched earth skirmish.

It is not a very good story—in the sense of a complete package—despite having some fun bits. For me, there are at least five major things that pulled the thing down to a incoherent mess: 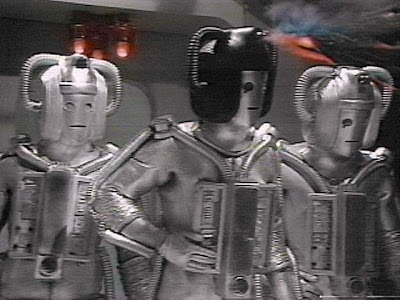 #1 The Lack of Gold as Strategy. Really this is the big one that, unaddressed, makes the whole thing a self-unaware waste. Voga is a gold planet. We find out that Cybermen are, for lack of a better term, fatally allergic to gold. Yet, when a pair of Cybermen invade Voga, the Vogans end up using useless firepower against them. Presumably had they just slung handfuls of gold dust into the air they could have backed the Cybers up and eventually destroyed them. Instead, the species is greatly wiped out by these two invaders. Invaders, by the way, accompanying human bombs into Voga despite the claim that the reason they don't send Cybermen bombs is because Cybermen can't go. Because of the gold. The reason that the Vogans are being persecuted by the Cybermen is because they live in a gold based world. It is possible that the Vogans are unaware of what the humans found out (and converted into "glitter guns") but come on...

#2 The Ridiculous Shoulder Squeeze. At one point, Cyberleader does something to the Doctor. Maybe it is a squeeze. Maybe it is a shocking grip. It mostly looks like a dude in a silver-foil suit shaking the shit out of Tom Baker for several seconds. 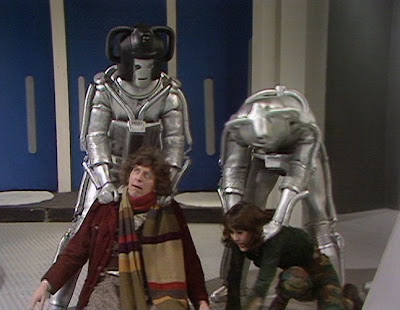 #3 The Too-Much-Gravity and Too-Much-Emotions Syndromes. There is a full atmosphere, water, and entire civilization on a "planet" that is only a few kilometers? I kept waiting to hear some speech about the gold core making gravity that much more but nothing like an excuse is given for making a full planet's worth of characteristics apply to something smaller than some asteroids. Then you have the patently emotionless Cybermen acting all emotional and stuff. Even being afraid to sacrifice themselves for Cyber destiny. D'oh!

#4 The Saturn-V Stock Footage. Right at the climax, the SkyStriker takes off, and the BBC decides to use quite blatant stock footage of an American Saturn-V. Sounds like something they would do in for laughs.

#5 Where the hell are the Cybermen? Budget restraints on costumes aside, we are meant to believe that the rather small (maybe a half-dozen, though I think you only ever see five if you are generous) Cyber party is a major threat that can be solved in one fell stroke. And despite their defeat at the end, the Cyber threat goes on, implying quite loudly that this party has little to do with the Cybers at large. And if this is just a small group then why the BIG PLANS to wipe them out? Eh.

So the Cybers need more menace, more care should be taken to explain the use of gold (or the lack of use), and Voga probably needs to be a full sized planet that, like Mondas, drifts on its own. In fact, had they made it something like an anti-Mondas, that could have been entirely too cool. Ah well, Let's end this something that I did quite like... 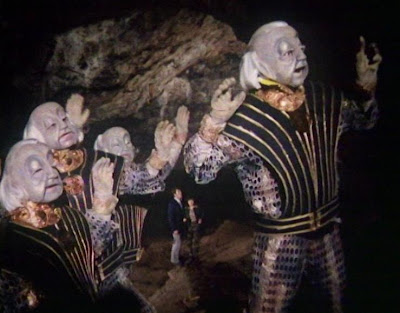 The Vogan Masks. The half-masks (Tyrum, Vorus) are mostly functional, but I adore the weird foam masks. Supposedly exaggerated versions of an actual actor's—Arnold Ridley's—face. Fascinating.

And well, there we go. Kind of a sad way to end Baker's first season, but least Sarah Jane was cute (and Harry, if you are into that sort of thing. ;) ).