How Occupy Wall Street nearly killed a short story idea of mine, but maybe not after all. On Skarl the Drummer and other Skarls....

Summary: Sometimes when I sit down to write out stories, real-world events happen to prevent me ever finishing. In this case, Occupy Wall Street happened so close to one of the stories I have written that had I gotten it out first I would probably called prophet...now, however...

How Occupy Wall Street nearly killed a short story idea of mine, but maybe not after all. On Skarl the Drummer and other Skarls....

After I wrapped up Grad School this past August, I knew I needed a little something to keep me occupied. One of my very first ideas was to oversee the creation of a fanzine dedicated to Dunsanian concepts and writings, to call it "Skarl" and then have it come out once every season or two (probably once every two or four, really), and have between eight and a dozen original pieces, mostly organized by a central theme.

The first issue was to be about Skarl the Drummer, from whose name the title came, whose drum beats weave into reality or, maybe more importantly, keep MANA-YOOD-SUSHAI asleep so that MYS does not wake up and wipe us out from existence. From and specifically the section: "Of Skarl the Drummer": 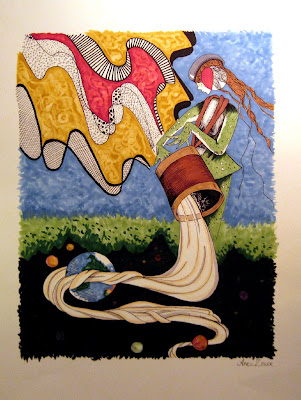 had made the gods and Skarl, Skarl made a drum, and began to beat upon it that he might drum for ever. Then because he was weary after the making of the gods, and because of the drumming of Skarl, did MANA-YOOD-SUSHAI grow drowsy and fall asleep.

And there fell a hush upon the gods when they saw that MANA rested, and there was silence on Pegana save for the drumming of Skarl. Skarl sitteth upon the mist before the feet of MANA-YOOD-SUSHAI, above the gods of Pegana, and there he beateth his drum. Some say that the Worlds and the Suns are but the echoes of the drumming of Skarl, and others say that they be dreams that arise in the mind of MANA because of the drumming of Skarl, as one may dream whose rest is troubled by sound of song, but none knoweth, for who hath heard the voice of MANA-YOOD-SUSHAI, or who hath seen his drummer?

But, when at the last the arm of Skarl shall cease to beat his drum, silence shall startle Pegana like thunder in a cave, and MANA-YOOD-SUSHAI shall cease to rest.

Then shall Skarl put his drum upon his back and walk forth into the void beyond the worlds, because it is THE END, and the work of Skarl is over.

We'll leave Peganaic mythology there, I just needed to set that up a bit so you can understand the basis of the story synopsis, below. Skarl makes for fascinating source material: a weary drummer keeping a great god asleep and when that drumming ceases, all of reality will blink out without knowing it and the drummer will walk off and be done.

Patterned sounds—whether instrumental, based on the human voice, animal noises, naturally occurring, or otherwise made—make good weird fiction fodder.1 At least it works for me. Text often has visual and emotional and narrative qualities, adding in other senses helps to round it out, and for some reason smell and taste and sound and touch all help to seal the deal when I'm reading horror. They can be overused, made trite, sure, but that's true of any description. Lovecraft has some of the best known instrument/weird crossovers, with his MYS/Skarl clones of Azathoth and the mad sultan's insane flutists piping to keep him at rest. And "The Music of Erich Zann" is regularly acknowledged as one of his finest tales.

My main Skarl inspired story—and keep in mind this was conceived in the end of August of 2011 and into September—was about a mental "virus" that infects people and causes them to gather in groups, especially in local parks and open areas [but later just about anywhere they can] and beat drums. Not just drums but sticks against trees, slapping their hands against pavement, beating their chest, pounding buckets against the ground. Any and all sorts of percussive beats. Occasionally bruising their skin or wearing their hands out until they blister and bleed.

At first, they continue to eat and do mostly normal things, drumming only takes up a couple of hours of their day. Over time, their fascination with the drumming causes them to starve, to die from exposure to the elements. It seems to have started in a small Alabama coastal town but spreads as people hear the drums. A psychiatrist turned college mental health worker is called in by a cousin to talk to some of the drummers. He befriends a couple, finds out about their compulsion, there are dropped hints to Skarl and MANA-YOOD-SUSHAI, and even shows early stages of infection himself. Cops are called in, initial arrests are somewhat friendly, a second round grows more aggressive. Other towns are starting to bust up drum gatherings. Violence is growing and deaths are happening. Etc etc. Spotted the problem, yet?

I wrote the story in one go, at least the plot portions; besides the fact that it would suck in that form, being mostly just vignettes told out of order, it was the complete story[line]. It just needed...lots more mood. Page count was about five pages, it needed nearer to twenty or thirty. I tooled here or there but kind of lost sight of the fanzine and had moments of doubt because I wasn't really sure where I was going with it. To a degree, it is a zombie story with a very particular zombie. Or something like a cult story meets a human expression one. Or, it kind of a "colonial" story where the drummers represent this unknown, disenfranchised people and the authorities are confused about how to handle them. It is almost mostly, well...I'll get to that.

Once Occupy Wall Street began, and went from being "march in the street until..." to "camp in the park until..." and even "let's have drum circles and stuff until...", suddenly my story seemed to be in trouble. Had I actually gotten it out there in September like I intended, it would have sounded terrifyingly prophetic and possibly a little pre-condescending. Hell, it is both those things because I wrote it back then, even if I didn't actually share it. Now when I finish it into something a lot less crappy and more readable and actually interesting, someone is probably going to say, "He's just trying to cash in on the 99%!"

In fact, the story is much older than late August and early September for me. I have been wanting to write a story about the end of the world where the end is coming but no one seems to be absolutely sure it is, they just generally feel it in their bones, since I was a teen. In every variation of that tale, I have always made teenagers and early twenty-somethings the most aware, the most accepting, and in every case they have turned against complete madness into something like a focused glee in some desperate act. One version, the one that has stuck in my craw the longest, involves a group of friends trying to ignore the fact that the Earth only has two hours to go and sitting around a table and just talking about the their lives, lives soon to be snuffed. The drummers and their mad, desperate drumming was a focus point to pour all of the fear of death, the fear of losing, the fear of never having a chance to succeed, the fear of never being understood, of never being 100% loved or 100% who think you could be, all that into the fear of the death of the Universe itself, a screaming last gasp of a world where MANA-YOOD-SUSHAI is about to wake up.

As of right now, I plan to keep writing it, I'm just going to give it a month. I have some new bits to add in some weird flavor and then I need to expand about three different sections to full, at which point it will be done in rough draft form. And, you know what, I think I will push for the fanzine, just aim for something about a March 2012 release (it would be PDF form, free, and of the size indicated above if all goes well). It just, well, it is going to feel weird.

In something like a similar story, one time I was writing a scenario involving the followers of Tsathoggua generating a massive hurricane to lay waste to New Orleans to turn the city into their swamp den central. I wrote it out based on weather patterns, we had characters semi-ready to go, and then Katrina happened about the week we were to start. It got canned. I don't think I'm going to let it happen this time.

1: There are three that I can recommend. First is William Hope Hodgson's "The Call in the Dawn", originally called "The Voice in the Dawn". In "The Call", a stranded on the edge of the Sargasso Sea ship hears something cry "The Son of Man!" in a thin reedy voice every dawn. Also see M.R. James's "A Neighbor's Landmark" and Ramsey Campbell's "The Pattern". The former is about a strange, uncomfortable high pitched whistling at a certain point, while the latter deals with terrifying screams that echo across the land for an [until the end] unknown purpose.

CREDITS: The story quotes above are from as available at Project Gutenberg here: http://www.gutenberg.org/ebooks/8395. The artwork is of Skarl the Drummer is copyrighted to April Zeller and is used here with permission. You can see more of her Pegana artwork at http://www.aprilzeller.com/2010.html. She even has an Etsy page with some neat pieces if you want to check it out.