Summary: A man is faced with a life-changing choice, and finds that he is largely already just a series of previous ones. As he debates the choice, the cold and the horror os past, present, and possible lives intersect with an oncoming sense of dread.

Greg Gifune writes plots as vehicles for a mood woven and delivered by calling on the weather, ruminations on the past, lighting [and its absense], the breakdown of the machine, urban decay, loneliness, exhaustion, desperate situations at the moment of impact, men at the cusp of violence, and being, as it were, slightly after the fact. Take , about friends who are thrust back into the life of a somewhat abandoned friend after his suicide and who start, soon enough, pulling back layers and finding an even darker past than they had realized. It is the kind of novel that sticks with you years after you have read it, makes you feel a little like the world itself is hiding something right behind the corner of the eye, in part because of Gifune's handling of mood and partially because of the underlying theme, that the present is a Hell earned by past events, and that, in the end, it became such because we ourselves did not care properly for what we had, that we let it rot like fruit left to long or prized possession left out in the elements. 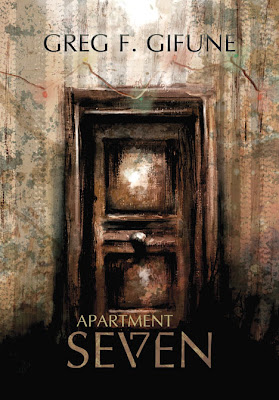 , one of two December novellas released as part of Delirium's 2011 book club, is a meditation on this same idea. It is also a fairly bald homage to —though several scenes seem lifted more from than anything else—mixed in with at least one other shout-out1 and Gifunian mood setting. Charlie, mostly on his lonesome, is trying to find where the past died and the present began, and suffering for it. Charlie is tracking down his wayward wife near Christmas—believed to be cheating with another man and, perhaps more telling, visiting an unknown apartment #7 in a rundown building—while mourning the loss of a life once worth living, and is unable to trace the line that lead to this.

At its best, the story asks the question, "What could make the past inaccessible? What possible things are unforgivable, unsolvable?" Death is one answer, being stupid for long enough, refusing to admit mistakes until late, deluding yourself into thinking you are happier, more badass, better off, or any similar thing than you actually are. Looking for demons where there are none, ignoring demons when they are right there. Ignoring the past. Ignoring everything but the past. As Charlie reaches out to friends to whom he no longer feels fully connected, as he gets a gun and is confronted with horrible things and visions he cannot understand—including three ghosts as per —we know that he has stepped over a line of no return. Whether he kills his wife's lover, himself, or faces the truth of his situation, he is effectively burned up and freezing to death on the winter street.

By the time Charlie's night time stroll is completed, this ulimately effective and painfully honest horror story about the sort of lies and half-truths we tell ourselves to try and find solace in the midst of our mistakes has felt a bit uneven in places—the flashes, key to the ideas here, have an odd disjointed feeling to the story around them—but dead-on on where it counts. Gifune leaves a few punches to be solved by the reader, which is good, while relying on a few brushstrokes too broad to paint his picture, but, still, the first couple of chapters are a near perfect mood setting and the overall package is forceful. Also has a few literary tricks that sneak in there, such as when the "flashbacks"/"flashforwards" are written in the present tense while the present is written in the past. Definitely readable, definitely a mood-hitter, and a good meditation on why we should treat those we love with respect and care because what the fuck else do we have?

Recommended digitally [don't think hardcopies are still around], and can be gotten for $4.99 from DarkFuse.com (or, if you prefer, Amazon).

1: One scene involves what seems to be a child in a red coat, ala .