Summary: Was it vandalism? NO! How to turn a non-thing into a breaking news story in four paragraphs.

"The phrase "L-S-WHO" was spray painted on the campus stone letter marker, along with other messages, including the Huntsville Havoc. But UAH spokesman Ray Garner said there's no vandalism involved. He said students have been expressing themselves on the stone markers the last four or five years."

That's the story in a nutshell, posted to "Breaking News from The Huntsville Times" in the Crime section. A UAH stone marker that is set aside for students to paint whatever they want on, within presumably the limits of good taste, had something painted on it. And the Huntsville Times was there.

Apparently this story was sparked because others are reporting the painting of the anything-goes marker as vandalism, despite anyone who has been on the campus for the past year and a half knows that anything-goes. Did some visitor freak out? Were LSU fans lashing out for attention? I don't know. But you know what, I just got three paragraphs of a post out about a four paragraph story about a non-event, so take that, irony.

ADDENDUM: after I posted this, the stone marker was updated to include a SOPA protest. I thought this was kind of fascinating because a few of the people who reported it included the phrase "It's not vandalism, because...!". Was there some MAJOR investigation into this I didn't hear about? Maybe. Or maybe just the comments to the photo where people are confused about students painting on the sign and how they went there for years and they never saw this and etc [part of the confusion probably lies in people not understanding where and which sign this is, but also UAH is taken by a number of students as effectively a commuter campus, and if you don't walk through the "slab" area often, you are not going to notice the changing sign]. Click on the pic to see the original FB posting and the comments. 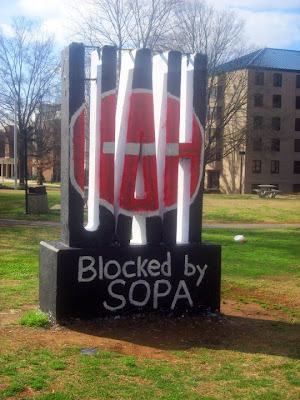