Dry v Wet Counties in the State of Alabama

Summary: Alabama has *mostly* wet counties, but I was surprised to find out the north third is nearly entirely dry with the exception of various cities.

Dry v Wet Counties in the State of Alabama

It is no surprise, I am sure, that I am a staunch opponent of the dry county regulation. I fully support people's right to never touch a drop of alcohol and any store who could sell beer or wine or liquor but choose not to sell? That's fine by me. Tossing aside alcoholic beverages as a course of legally imposed welfare? Maybe I just like beer a gin a bit too much, but "Eh". I am sure every county that has voted to make itself dry has done so with passionate pleas about the women and children and broken homes it could save except, well, I'll get to that. And they all must of have had massive balls to declare Jesus turning water into wine as an intolerable, illegal act.

Looking at the chart, gotten from the website of the official alabama alcoholic beverage control board, two things strike me. First, I would have guessed even distribution across the state but it looks like the North part of the state is the heaviest in the dry side. In fact, only two counties—Madison and Colbert—are fully wet. And only one of those is marked as allowing draft sales (HURRAH for Madison County!). Secondly, it's all a big bunch of hooey because effectively every city/town of even the slightest significant size in that wide swath of dry-and-yellow is a wet city. Which means your average drink-craver is probably about 20 minutes from satisfying their craving. Just to put this in perspective, if I was to want a drink, it would take me about 15 minutes here, in my wet county, to muster up the energy and get my butt into a bar, which means that people in Jackson county have roughly the same trouble getting to a drink that I do, despite the holy-rollers keeping the devil's spit down. In the end, about the only difference is they have about 5x the reason to buy booze and drink it on the way back home (and Scottsboro's liquor stores probably do a mint). Think of all the tax those non-wet cities hand over to wet-cities. Give unto Caeser, I suppose... 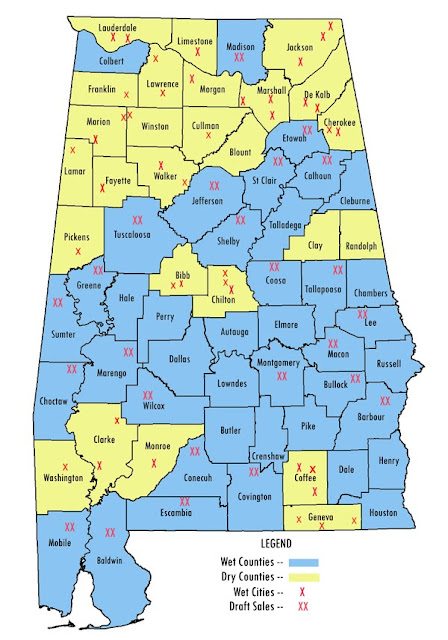 Getting curious about some correlations, I decided to try a few other googly searches. One was to try and find dry counties in neighboring states, and that got frustrating, but I did find this. I was entirely unsurprised, though, to use this map of Alabama universities and colleges, and to find that only a couple of universities are in dry counties, and essentially all dry-county universities are in a wet city.

Ah well, time to go home and make a nice and relaxing gin and tonic, turn on some Doctor Who, and enjoy my Friday night.