Summary: Vanishing on 7th Street, 2010 Survival Horror with Religious/Existential overtones. The lights go out and people disappear. Some fade, some scream. As the days go on, darkness spreads. For a small handful of survivors, the constantly dwindling hope they hold is all that is keeping them going. Too bad the overall movie rarely fails to spread its wings and do anything worthwhile. Starring Hayden Christensen, Thandie Newton, and John Leguizamo. Directed by Bran Anderson.

the gist. When the lights go out one night, something in the dark takes nearly everyone in Detroit. Instantly. With barely a sound. Leaving only clothes and effects behind. The next day Luke wakes up to find his girlfriend missing and the city a mass of abandoned cars and empty buildings. He wanders for three days, learning to survive, until he finds a bar with a generator that can keep out the dark. Except it is not for long and the things in the dark want inside. With a small group of survivors, Luke debates a course of action as time runs out, and down, and hope dwindles. 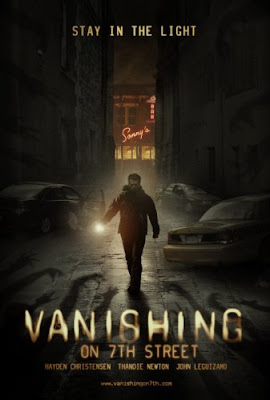 1 paragraph review. The fact that this movie does not appear to be the victim of rewrite hell surprises me, because it has all the signs of a movie whose script suffered a few major whacks and reshuffles. Like pieces of a half dozen different china plates glued together to something that almost, but is nothing like, a functional eating device. It is mired with drifting characterizations, rules only retained for the drama of a couple of scenes, rambling moods and themes, and possible the biggest Chekhov's Herrings1 I have ever seen. And while I can deal with movies that have no real answer, so many of the thrills and so much of the mystery in this case are a wayward mix of missed chances and gaps of logic meant to help add to a few faux twists. It is survival horror for people who do not bother with with narrative nor common sense but think a three-penny debate between Existentialism and Christianity delivered at the edge of over-acting counts as deep. And a shame, too, because this bird had some potential but nearly really flew. A very Meh piece.

plus some paragraphs. I knew something was going wrong in the movie when Hayden Christensen's Luke completely ignores the pleas of another survivor—in a world where people disappeared but all the canned goods and such didn't so scarcity is suddenly the least of your problems. I knew it was even worse than that when his attitude about letting others die quickly melts in the face of a child and woman. And, by the time they come up with some cock-eyed theory about solar power batteries lasting longer than any other batteries, I knew that this was a patchwork film meant to convey only one idea—that darkness wants in, real bad—and everything else was just meant to hasten that theme.

Let's leave aside the logic of the night being longer than the day, presumably everywhere in the world, the variable amount of light needed to keep the darkness at bay, as befitting a scene's needed tension level, and the disproportionate aspects of the initial attack versus pretty much every other one shown. And, let's go ahead and leave aside the amateurish shoving of the Roanoke Colony half-mystery into making Croat ban into some sort of global keyphrase humming at the base note of the universe.

Instead, let's gut this movie and look at its entrails: darkness is coming, you can't understand the darkness, you can't reason with the darkness, hold your own light and trust it above all else, the darkness will use the past to bring you down, and most importantly, all the plans you've built up to keep the darkness out are just temporary. Eventually all those batteries and generators and whathaveyous will run down, and then you are screwed. Now, look at those things, and squint your eyes, and you have what this movie is about: surrender and its duplicitous meaning, where on one hand it is a glory unto God/love/the Universe to give into fate and on the other it is the worst possible thing. You can skip the movie, you've seen all that it has to offer just by reading this paragraph.

1: I don't know if I made that term up or not, but let's just say: an item/event foreshadowed through a couple of different scenes that ends up meaning absolutely nothing.