Sat down with Sarah and Becca to play a session tonight. Not only our first time playing it, but I think the first time Becca has ever played an RPG. We went for the "News Channel Six" playset—we are connected to a failing news program (and I extended it to a small market TV station in, I think, made up Tungsten, GA) for very little reason besides that when I first saw it, I knew I wanted to play it first. Specific enough to have some quirky workings, and odd enough [none of us are journalism majors, etc], though frankly very little of the story really cared where we worked. 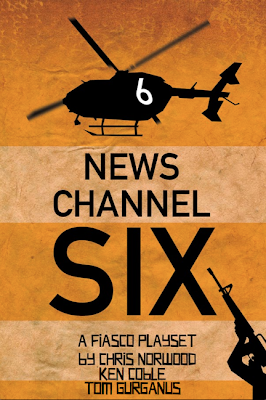 I'm not going to discuss the overall rules of , except in specific cases, but the link above has a preview, and there are videos and other blogs that go into more detail [see TableTop's Episode 1 and it's "prequel", the "setup" episode, for some samples of game play]. What I'm going to discuss is our specific game, and then what I found to be the strengths and weaknesses of the system.

The first strength that I came across is that the Set-Up stage, where you are figuring our relationships and such, adds far more variety and unpredictability than I thought it would. I had in mind that I would play a reporter, probably, who would end up fabricating some big story, possibly by sacrificing a coworker. What ended up happening involved two old friends (one male, one female) falling for the same young (female) reporter [or well, having sex with, I'm pretty sure the one guy never actually fell for her], a porn movie, blackmail, a lot of booze, a young community college drama major, a murder, a trailer park, and a lot of implied history. Here is a breakdown of the characters to show you how much fun Set-Up (and further character building during gameplay) can be:

In the First Act, Desi finds out that Tim has some footage proving what Susan is doing, but she is protective enough of Tim to not want to come out and say it to Susan. Susan is stringing Desi along, but now that Susan holds the top anchor position, she is already sort of moving on from the older woman. Desi knows that Tim wants to tell Brad about the tape, but she hopes that she can have him postpone it enough that she can cover up any and all evidence linking her back to it. A plan complicated when she suspects that Susan is having lots of sex with Stan behind the camera as well as in front. Desi starts to lean towards getting back at both Susan for the betrayal, and selling out her old friend Tim because his constant pressuring her for help and calling up old secrets starts to feel like a drag.

The Tilts were "Cold Blooded Score Settling" and "Greed Leads to a Killing".

In the Second Act, Susan begins to suspect things are unravelling a little but has no idea just how bad. She's getting ready to leave town shortly [the movie is nearly done], which means that her getting Tim fired was mostly just to be an ass. Desi has gathered up all of the footage and the props from the film, and after a confrontation with Brad, has blamed it all on Tim [and presumably Susan]. She makes an error, here, in that she doesn't edit herself out of the footage she is in Around here we find out that Tim had actually showed up to the station at 6am, and found Stan and Susan leaving after a night of porn shooting and post porn frolicking. He followed Stan back to his trailer and tried to get Stan to take a bribe to turn on Susan. Stan refuses, and Tim ends up killing him. Susan finds this scene later but mostly panics and runs. Desi dumps the footage and props in Tim's house. The end of the Act was Tim showing up during the 6-o'clock report and bribing old John to cut to some clips in the middle of the broadcast.

If the strength of the game is in the way that the Set-Up brings out storylines with surprising angles even for the people playing the game, the weakness is how the Aftermath felt too constricted. I mean, the above paragraph makes it all work out, but the time spent on the Aftermath would be about the time you spent reading the paragraph, if that. Even with the caveat that this was the first time we played so we didn't quite stack the scenes with the proper expectation the last scene (that I played as Tim) was the conclusion of the action [and there was only three of us which meant we got only 12 total scenes with six in the last half], it still felt like the least fun we had all night. Partially because the game is banked on two colors of dice, one is positive and one is negative, but in the Aftermath, they are treated as something like cancelling forces and their definition changes. It actually means that someone can game the system and go for completely negative scenes because if one color of dice completely outnumbers the othert the chances that the game ends up really good increases [presumably they get the "so screwed it actually worked for them" scenario]. And a game that is all about dialogue between characters (with even action scenes tending to be played out with constant feedback), it suddenly comes down to a very individual moment where players just list off a montage of brief events that happen to their character. I have some ideas about how to play this differently, but I would like to read the before I talk about them, and probably play another game, with four players, before I 100% vouch for them.

Overall, a Good game and I will be playing it again. You can even get and the as a PDF bundle on DriveThruRPG for $20. Then playsets can be gotten as free to download PDFs via a playset-of-the-month set up, and there are four each in the base game and in the Companion, with several of those eight basic playsets being broad enough in setting to probably withstand a few replays. We turned a setting involving a low-rated station into a reason to kill someone and more porn than you can shake a stick at. Just imagine what you could do with, say, a playset set in all girl's dormitory? I need to go write that playset, now...