Seventh Moon, a horror movie that is greater than the sum of its parts, but still misses too many beats

Summary: In Seventh Moon, an American couple confronts a not quite literal incarnation of the Festival of the Hungry Dead. Then they run through really dark fields and barns, and the rituals get a little self-confused, and there are some pretty scenes and a little gore. And stuff. Not a great movie, but could have been a really good one had it shored up its identity crisis in time. 2008. Released as part of Ghost House Underground. Directed by Eduardo Sanchez. Starring Amy Smart, Tim Chiou, and Dennis Chan. Written by Sanchez and Jamie Nash.

Seventh Moon, a horror movie that is greater than the sum of its parts, but still misses too many beats

When Melissa and Yul take a honeymoon in China to visit his family, their visit corresponds with the Hungry Ghost Festival [LGT: Wikipedia]. As their tour guide Ping drives them across the countryside to see Yul's grandmother, he reports he is lost and gets out to seek directions. When he doesn't return, they find a boarded up village with animals staked outside beside other sacrificial offerings. They run when the villagers start "inviting" something to come, but by the time they get back to Ping's car, it has been splattered with blood. Yul and Mel take the car and flee, but after stopping to help an injured man, they find they are being stalked by "moon demons". With no place to hide, no one willing to help them, and no weapons to fight back, the erstwhile trio finds their chances of survival low and quickly getting worse. 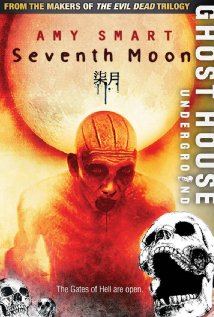 Part of me wanted to enjoy this movie more than I did, and I think upon finishing it my take was fairly positive, but thinking back lead to hindsight picking out the flaws moreso than the successes. The chief flaw lies in its identity crisis. The very first part is a set of close cuts, shaky glimpses, and an overall home movie feel. In time, the film becomes more horror normalized, with longer scenes of blurry monsters and over dark staging shots [this part irks in that it is essentially just a couple running back and forth and failing to get caught]. Eventually the photography starts going for style, so that the final shots involve color and lighting contrasts, strange sets, and a louder soundtrack.* In a smart move, this allows the movie to end on a high note, with better timing and a stronger mood than any scene before, but the high note is struck by being nearly unlike anything preceeding. There are only three and a half real characters [plus some monsters, whose makeup ranges from effective to kind of like something you might see on your younger brother's favorite metal album], which can be risky but I'm glad they tried for an intense focus on the core trio. Too bad Amy Smart's borderline shrew and Tim Chiou's borderline milquetoast have only a couple of scenes to shine. It is really Dennis Chan's more enigmatic Ping is that is the reason to watch this. The whole thing is greater than its conflicting parts, with the scenes with the creatures relentless pounding on doors or cars to get inside are effective in a zombie-horde sort of way and the cave scene is even more effective on a number of levels; but this still leaves the movie as a weak Fair or maybe even a Meh. Defintely point deduction, as well, for ignoring its own rules and failing to lay a mythos even though the storyline apparently deals with long standing customs and memes.

The big failure is that it co-opted the Hungry Ghost Festival as a literal thing—ghosts...or...um...moon bog...demons...hungry for the flesh of the living!—rather than as a legitimate slice of Chinese lore. Outside of the opening, they avoid potential goldmines like Hell Money and the burning of paper objects. Since they were going for more visceral, I can appreciate this, but just about any additional Chinese culture would have only aided, rather than hurt. They do have a little bit to explain away part of my complaint by making this not Chinese "weirdness"—as Yul shouts, in one of the best bits, "This isn't Chinese weird, this is weird weird!"—but instead this is a specific terror to this one little place, and though it kind of rotates around the overarching Chinese culture, it could Podunk, USA. Which is a good thing. Otherwise, they are namedropping Chinese customs and then melting them down to only what might freak out an American audience, and since this is no longer the 70s, I'm not sure that would fly so well nowadays.

* By the way, right after the movie flips to the weird, it leads to a sex scene so unnecessary it might be the most unnecessary sex scene in horror history.