Summary: The phrase, The Stars Are Right, is an interestingly foreboding phrase for fans of Lovecraft's fiction, depicting a time when the stars will realign and Cthulhu will rise and the end of humanity will come. It is also slightly extra-canonical to anything Lovecraft wrote. 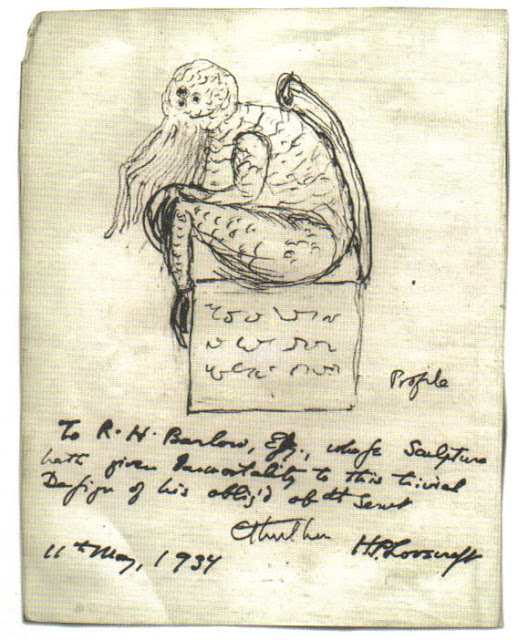 One of the most persistent pieces of Fan-canon (or fanon) across all genre-fiction is inspired by an attempt to reconcile the ending of H.P. Lovecraft's short story "The Call of Cthulhu" with the current take of Cthulhu as a black-magic science fiction anti-christ, a harbinger of Earth's final days with powers so inhuman that once he arises, there will be no hope for humanity. In the short story, the climatic battle between the Great Old One and a few human sailors goes really poorly for the sailors until one of them decides to hail mary the whole shebang and rams the star-spawn-supreme with a boat:

But Johansen had not given out yet. Knowing that the Thing could surely overtake the Alert until steam was fully up, he resolved on a desperate chance; and, setting the engine for full speed, ran lightning-like on deck and reversed the wheel. There was a mighty eddying and foaming in the noisome brine, and as the steam mounted higher and higher the brave Norwegian drove his vessel head on against the pursuing jelly which rose above the unclean froth like the stern of a daemon galleon. The awful squid-head with writhing feelers came nearly up to the bowsprit of the sturdy yacht, but Johansen drove on relentlessly. There was a bursting as of an exploding bladder, a slushy nastiness as of a cloven sunfish, a stench as of a thousand opened graves, and a sound that the chronicler would not put on paper. For an instant the ship was befouled by an acrid and blinding green cloud, and then there was only a venomous seething astern; where—God in heaven!—the scattered plasticity of that nameless sky-spawn was nebulously recombining in its hateful original form, whilst its distance widened every second as the Alert gained impetus from its mounting steam.

[Note: All quotes from this story are taken from the H.P. Lovecraft Archive version of "The Call of Cthulhu", other versions might vary slightly.]

This seeming paradox of an otherworldly titan being bested by a single strike from a ship has led to one of the persistent questions, as asked by a recent Reddit post (for the umpteenth time): "How exactly was Cthulhu defeated...?". And like with most of these similar posts, the top answer is simply: "The stars have to be right"*. Meaning that the stars were wrong. Or, at least, were not entirely right, with a common assumption being that if the stars are very wrong at 0.0, and are right at 1.0, there exists some value (for now, let's say s>0.7) that the stars are right enough to result in Cthulhu being able to increase in power, but not so right (s=1.0) for him to fully awake. This is not merely the claim set forth by redditors and message board fans, in Kenneth Hite's , we see the standard fanon answer (page 18):

That's just because the stars aren't right. When the stars are right, it don't matter how many boats hit him. He'll sink whole continents and lick off the people like salt off a pretzel.

There is an interesting horror-sociology at play here. "The Call of Cthulhu" is a story that I suspect many people come into long after being exposed to the popular version of the material. When people read it, they are reading it to confirm their vision of Cthulhu. A similar thing happens with and vampires, where people assume the death-by-sunlight is an integral part of the myth, only to find that Dracula himself is perfectly capable of wandering around during the day. In the case of the big-C, we are exposed to him as a powerful sleeping demi-god who will destroy humanity and the boat-strike being even temporarily effective does not jive with our version of events.

Part of this is because some of the most important lines in "The Call of Cthulhu" are often overlooked. I quote them below, from section "II: The Tale of Inspector Legrasse," emphasis mine:

These Great Old Ones, Castro continued, were not composed altogether of flesh and blood. They had shape—for did not this star-fashioned image prove it?—but that shape was not made of matter. When the stars were right, They could plunge from world to world through the sky; but when the stars were wrong, They could not live. But although They no longer lived, They would never really die. They all lay in stone houses in Their great city of R'lyeh, preserved by the spells of mighty Cthulhu for a glorious resurrection when the stars and the earth might once more be ready for Them. But at that time some force from outside must serve to liberate Their bodies. The spells that preserved Them intact likewise prevented Them from making an initial move, and They could only lie awake in the dark and think whilst uncounted millions of years rolled by. They knew all that was occurring in the universe, but Their mode of speech was transmitted thought. Even now They talked in Their tombs. When, after infinities of chaos, the first men came, the Great Old Ones spoke to the sensitive among them by moulding their dreams; for only thus could Their language reach the fleshly minds of mammals.

Then, whispered Castro, those first men formed the cult around small idols which the Great Ones shewed them; idols brought in dim aeras from dark stars. That cult would never die till the stars came right again, and the secret priests would take great Cthulhu from His tomb to revive His subjects and resume His rule of earth. The time would be easy to know, for then mankind would have become as the Great Old Ones; free and wild and beyond good and evil, with laws and morals thrown aside and all men shouting and killing and revelling in joy. Then the liberated Old Ones would teach them new ways to shout and kill and revel and enjoy themselves, and all the earth would flame with a holocaust of ecstasy and freedom. Meanwhile the cult, by appropriate rites, must keep alive the memory of those ancient ways and shadow forth the prophecy of their return.

Lovecraft had another game in mind with the text. It is not that Cthulhu would arise and wipe out humanity, it is that humanity would reach a point of immorality so vast that it would welcome Cthulhu. In this way, Cthulhu is an analog for a -esque Satan, who will enable people to achieve even greater heights of ecstacy and destruction when they let him, acting as a sleeping tempter. Until then, two things are required. The stars must be right, and someone must awaken Cthulhu. In the context of the story, it seems that the Alert's crew were either preparing to do just that, or were waiting for someone who could. Note the slight play on words, "alert" comes from the root of someone watching out, but also brings to mind...wakefulness.

Perhaps the biggest slap to the extended-universe version of Cthulhu is found in Lovecraft's own writings, "The Shadow Out of Time," which is a rare (nearly unique**) glance into the future of the planet. In it, we see that there will be a beetle-race that comes after humanity, and there is discussion of the war with the flying-polyps**, and mentions of the year 16000CE, but there is no mention of Cthulhu rising. Precise canon in Lovecraft is dangerously elusive, but since this story ties into "At the Mountains of Madness", and that story ties into "The Call of Cthulhu" and "The Shadow over Innsmouth", then it seems like a strange thing to leave out. Unless you argue that the "dark conquerors" are an allusion to a Cthulhu cult triumphant (one that eventually dies out and gets beetle-replaced).

This all becomes academic when you take Lovecraft-lore to be supra-Lovecraft, though, which most would. It is really only viable as a debate when looking at the original sources. Cthulhu, in the expanded-lore, is a dark god that will one day bring about a holocaust of fire and pain and wipe out humanity. Just not in the original story. Not exactly. As for where Lovecraft intended Cthulhu to end up in this original tale, we have the final paragraph of the short story:

Cthulhu still lives, too, I suppose, again in that chasm of stone which has shielded him since the sun was young. His accursed city is sunken once more, for the Vigilant sailed over the spot after the April storm; but his ministers on earth still bellow and prance and slay around idol-capped monoliths in lonely places. He must have been trapped by the sinking whilst within his black abyss, or else the world would by now be screaming with fright and frenzy. Who knows the end? What has risen may sink, and what has sunk may rise. Loathsomeness waits and dreams in the deep, and decay spreads over the tottering cities of men. A time will come—but I must not and cannot think!

* Another common fan-theory is that the being encountered at the end of the story is not Cthulhu, but only something like an advance guard.

** In the short story, "Nyarlathotep," there is a depiction of a nightmarish future world where much of humanity is wiped out and dark realities are commonplace. It is, though, notably non-specific.

*** The polyps are not named in the story, and much of their description as basalt-loving creatures that are partially out of space-time and who were driven underground years ago might be applicable to the star-spawn, but current canon assigns them to a wholly different bucket.

OTHER BLOTS THIS MONTH: January 2016