The Millennium Trilogy as Phenomenon, Thriller, and Literature

Summary: Now that the third book is out in English, and I have read it, I sum up my thoughts about the trilogy as a whole. Does the 'Swedish Phenomenon' live up to the hype? Does it make a good thriller? Is good literature? While I wouldn't toss myself into the unwavering fan category, I discussion its ups and downs.

The Millennium Trilogy as Phenomenon, Thriller, and Literature

In the terms of a literary phenomenon, I wasn't 100% sure how The Millennium trilogy was doing. The Millennium Trilogy, aka, "The Girl With/Who..." books: , , . That's their English names, their original names translate something along the lines of "Men Who Hate Women", "The Girl Who Played With Fire", and "The Castle in the Sky Explodes". Turns out, according to the New York Times we are looking at about 27 million copies in print, total. Though other sources credit the first book, alone at about 30 million copies. That's a wide differences (9 million printed, roughly, per book versus 30 million copies sold for the first book). This made me dig deep, and I found Yellow Bird, the people behind the three Swedish language movies, put the number about 26 million sold but didn't specify a date. It mentions some 2010 releases, as well as some 2008 releases, so I'll call average and assume late 2009.

In terms of well selling books, that's definitely to be commended, but just keep in mind that the other recent big literary sensations—The Robert Langdon series (something like 120-150 million total), the series (400 million copies according to an oft-quoted number, but I've never seen a link to a publication source that might be more accurate), and the series (about 100 million total)—have tended to sell, per volume, what the entirety of Larsson's three books have pulled. But then again, those three have had huge movies and Happy Meals toys and calendars and tie in t-shirts so it is quite possible that MT just quite hasn't hit its stride (like 27 million copies is underachieving, I sound like a Jewish mother).

The only reason I am bringing this up is because more and more people I know have heard of them, but I have no friend besides myself that has read them and a few are avoiding them. I have recently seen a handful of folk on Twitter say things like "I am going to crack open 'Dragon Tattoo' and see what the fuss is about...". It just feels a little like this may be a post hoc sensation, one created after the news stories declaring it so. If it is, I'll applaud whoever thought it up. 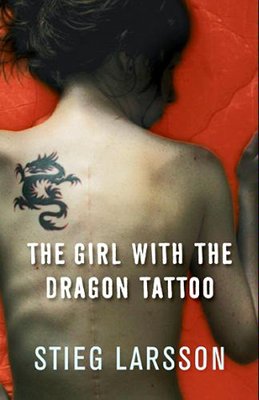 Let's push the sales figures aside (because when have those ever been about the quality of a book?) and look at the books themselves. The word trilogy gets bandied about a lot. This is not untrue (there are three books about two central characters) but it is also misleading. To explain, I'll give a brief synopsis of each of them.

Dragon Tattoo: Recently disgraced reporter Mikael Blomkvist is hired by an elderly businessman to investigate the 40-year-old murder of his granddaughter. Mikael ends up hiring Lisbeth Salander to do research for him, involving an even larger murder ring than realized, shortly after she goes through a period of personal trials. They start to become friends and lovers, as they unearth a good handful of dark secrets and try to do, roughly, the impossible.

Played with Fire: A year or so after the first one, Blomkvist has taken on a protege reporter who is investigating illegal prostitution (as opposed to legal prostitution, since I think Sweden allows it with license?). When the protege ends up dead, Salander is blamed for the murder (as well as two more). Blomkvist races through red tape and misinformation while Salander tries to find a mysterious man who might behind the whole thing.

Kicked the Hornet's Nest: Immediately after the climax of the previous novel, this one picks up with Salander in custody (and gravely wounded) and Blomkvist arrested. Some of the powers that be turn out to be more worried about their personal image than the life of a single Swedish woman, and so once again conspire against Salander, as Blomkvist once more steps right into the role he was in the last one: her knight in shining newsprint. The stakes are higher, and the sex-slave ring subplot is excised, but in many ways this one is a retread of the last, up until the trial towards the end that will either destroy or release Salander.

What you have is one novel about an older murder case and dealing with religious symbolism and mild hacking abilities followed by a pair of novels about espionage and covert operations and daring hacking attempts against agents in the government and so forth. About the only thing that links them is the inclusion of numerous discussions at the Millennium board level (this is the magazine that Blomkvist works for), hence the name of the trilogy. Had Larsson stuck around for a bit longer, no doubt we would have gotten more books, in which the staff of Millennium and Lisbeth Salander got involved in other types of situations, making the weird divide between the first one and last two feel more balanced. There is at least one unanswered question that suggests this was the intent. 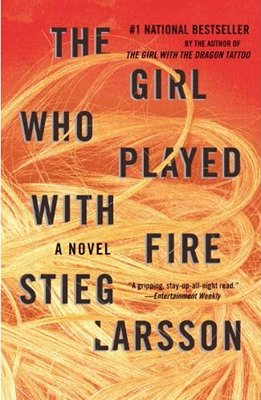 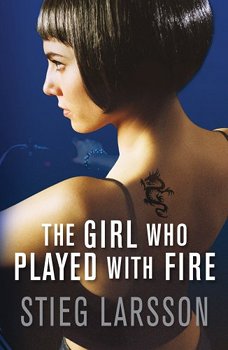 How good are they? Well, I was entertained, but I'll spoil it right out and say that the whole thing is essentially a liberal revenge fantasy (as English majors and school drop outs take down the government with all their fancy equipment...sort of). Larsson has a way of repeating certain phrases (you will get tired of the words "iBook" and "Kalle Fucking Blomkvist", I guarantee). Both Blomkvist and Salander as pigheaded, borderline uninteresting characters. You become enamored of their actions, but find little of their soul to dig into (unless reading, again and again, how Salander refuses to talk to police men constitutes a soul). Blomkvist could easily go toe-to-toe with Robert Langdon for the title of most self-satisfied quasi-biographical character, except while Landgon is Brown in an action setting, Blomkvist is Larsson stone-walling government workers while pulling in thick slices of all available skirt in a thirty-mile radius. He gets laid, a lot. And then the story talks about how awesome in bed he is. This happens more than once. Speaking of "more", it made me more than a little annoyed. I've read at least one article that asks if the trilogy is really feminist, since every woman can't help but go to bed with the liberally minded reporter and, with a couple of exceptions, end up taking it hard when he goes into his "I wasn't looking for a relationship" speech (Salander plays a similar game, sometimes, but while Blomkvist beds skirt with something like grace, she beds older men with something like a daddy complex...).

Perhaps most damning to the overall enjoyment, even more so than the repetition as style, is the shape of Larsson's story payout. If you borrow a technique from Vonnegut, and plot a story's pay-out versus the distance into the story, then all three novels form a shape much like a lower-case mu. Starts out in some deep nadir of disinterest, starts to into a storyline, begins to get exciting about 150 pages in, then (after Larsson has ostensibly hooked you) starts to drift back down into a comfortable saddle for a leisurely ride in which a rich parade of bureaucratic details seep out until, around page 400-450, the tension once more mounts and it all boils over to a...hold up, here are another 50 pages in which un-exciting aftermath can be discussed. If the second book avoids that last bit, it is only by ending abruptly mid-thought.

For another time, I can't help but wonder: what if Larsson had been alive long enough for this to develop? Could the books have been retooled to better structure? Could some of the repetition been smoothed out. Could they have dropped a few characters who drift in and then drift out (a boxer character in the second novel comes to mind, introduced and piled on with fanfare, including one of the only extended fight scenes in the trilogy, only to fade out before the climax and absent in the events of the third except as a mention). Could he have been convinced to drop the LOVER boy with a capital L aspect of Blomkvist, or to make Salander a little more viable as a character? Maybe fix some of the goofy aspects of the hacking (they are pinging each other's ICQ address? a hacking tool that uses Internet Explorer effective in a world where everyone seems to use a Mac laptop? about the only good "hacking" was using online, anonymous message boards to leave each other notes). There are some good, if not great novels, buried underneath but they feel rough, unpolished. He was developing into a rich, quasi-political style that would have served him well for future novels but the result, as is, is overstuffed and feels unverified, like the rough strokes of a painting's outline without fine details being finished. C'est la vie. 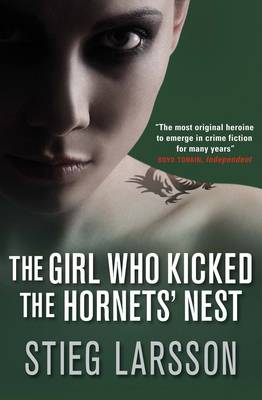 In fact, a fourth book was being written (set in Canada, interestingly), but due to some estate wrangling and legal battles, might not show up for a while. Also note that Larsson had the beginning and ending written but was needing to fill in the middle. Look at my "graph" of the payoff, above. That might just be how he wrote the novels, a flurry to get the set-up and climax done, with the connecting tissue written later, after the fact. It would explain a lot.

But for now, the trilogy is just three books and the story is all over but for the English language version of the first movie set to come out in a couple of years. Possibly more, but we'll let time decide. Definitely didn't hate the experience of reading them. I won't come down hard on them, but I won't say they are flawless or even 100% recommendable. They are readable, and make for interesting escapism, but they are not quite as good as much of the press makes them out to be. I know that's just me (and some have become obsessed with them), and this partially because I did not buy into the Lisbeth Salander character without qualification; and that is what is ultimately required to "feel" these books—the acceptance and even adoration of her as a archetype of the disenfranchised by capable female. My main hope is they will inspire people to look more into other Swedish works like the series, which deserve a glance.

This work is licensed under a Creative Commons Attribution-Noncommercial-Share Alike 3.0 Unported License.

If you use it for the purposes above, then a quick line to let me know would be appreciated, but I would not say required. I am willing to grant exceptions (non-share alike, for-commercial) to this overarching clause if you contact me and work it out prior to creating the derivative work. You may quote me as much as you want, and link to me as much as you want, I only ask that you do so "morally", however you take that term. This license only applies to original works by William Douglas Bolden (i.e. me) and only to works posted to this website. All quoted and referenced works, be they movies or books or other websites or whatever, are subject to their original license or copyright and are the property of their owners. I have made a strong effort to properly attribute them, so please respect me and them by doing the same.