Why the Christy "returning to the climate of our grandparents" only looks at half the picture, though I agree with the general conclusions

Summary: John Christy looked at average high temperatures across the state and found that it used to be really hot here and so lately it has not been so much warming up as returning to the norm, but I do feel like pointing out *one* thing.

Why the Christy "returning to the climate of our grandparents" only looks at half the picture, though I agree with the general conclusions

As of yet, I haven't heard/read too many go on about this week's (and next week's) 100+ degrees in Alabama heat-wave being a sure sign that global warming is here and now. I'm sure such statements are going on. They are inevitable. Every snowflake gets mocked as proof of absence, every heatwave gets marked down as evidence of existence. Your average layperson understands surprisingly little about weather yet talks about climate as though they had a doctorate in it.

In something of a presponse1 to the sure-to-come "GLOBAL WARMING IS MELTING ME!" cries, John Christy [and Phillip Gentry] have emailed out some data, see: The Climate of Our Forefathers, that show that average summer high temperatures are actually just returning to about the level they were when, presumably, Alabama was closer to Hell.2 Yay, we are back where we belong, everybody!

Except something I noticed that slightly bothered me is that Christy's explanation focused on high temperatures, which makes his graph look like this [if you want to see a larger version, look to article above]: 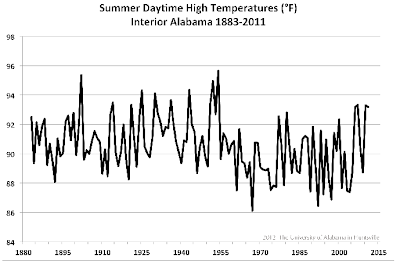 You'll notice there was indeed a dip in the mid 50s and then it has only returned to what it was at the beginning of the 20th century. What's more, the return hasn't been yet completed and so overall we are actually cooler than we used to be. Score one for the "There is no climate change" folks, right? Sort of. A couple of things. The big one is that climate is more than just average high summer temperatures. Stability of weather, precipitation, severity of storms: all of this show up. Especially in the second thing to point out, that average highs are by nature focusing on only half a warming trend.

By analogy, if you have two runners—Max and Steven—and Max has a top speed of 15 while Steven has a top speed of 12, then it would seem that Max always wins. In fact, though, it is average speed that wins the race and so if Max walks off his non-sprint segments while Steven is constant, you might get a whole other picture. Average highs just mean that the temperature got pretty hot everywhere, but says nothing about how stable the region was, or, more importantly, how able the weather was able to correct the high temps of the day through wind, rain, and cloud cover. If I was to take, say, the data from The Southeast Regional Climate Center, data that shows average temps which would average highs and lows, what would it look like? Well, this: 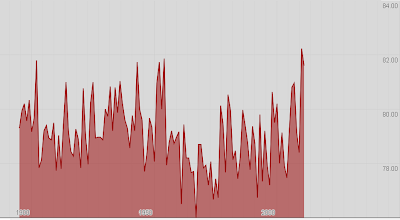 Nearly similar images, but you'll notice at least one or two differences. The big one is that once you factor in that average lows are higher than average lows used to be, overall average temperatures the last couple of years are equal to or hotter than even the really hot early-20th century temps. But just barely. We are talking about a matter of a couple of degrees and a period of time nearly trivial in that it was only a hundred-slightly-plus years out of the massive amount of time the land has been here. It may be that the temperatures are supposed to be a lot hotter or a lot colder and all the data we have is an aberration.

What's more, graphs have one overall problem in that while they visually display data, scale is everything. Take a look at the same data as above (average temps across summer) except on a scale from about 35F to 105F (a good range for the region): 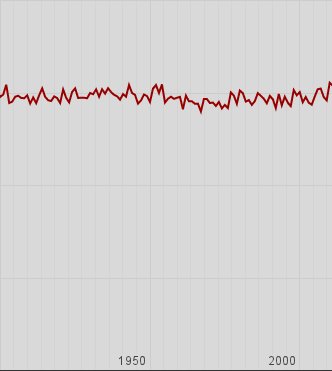 The leaps and whirls are much more like "Maybe 81F, maybe 79.5F". You can still see the [now slight] cooling dip from the 50s to the 90s, and the return to 30s level temps happening over the past couple of years. At any rate, my point is not to argue that Christy is wrong—even as a young Doug I had noticed historical data pointed out to the 1930s being real damned hot—just that there is a slightly more useful number, I think, to make his point.

2: Note, presumably my inability to take heat is at least partially genetic, and yet my family has lived here in the state (in the swampier, more humid south side of it, even) for generations...guah...now there is an unexplained myster for you, why the Boldens didn't relocate to Northern Canada.