(Wikipedia, IMDB.com) has a fair amount to like and an equal amount, pound for pound, to hate. Somewhere in that heady blending of emotions you, the watcher, are playing out a hedonic calculus between despair and longing. Think of that uncle and aunt pair you probably have (because most everyone does) and he's a sweet-heart with great stories and she's a pushy bore and you get them both at once no matter what, and spend a lot of time saying things like "Oh, great, Uncle Tommy is here! I LOVE Uncle Tom...Aunt Susan...um. Oh. Hi?" That, there, that's this movie in a nutshell. 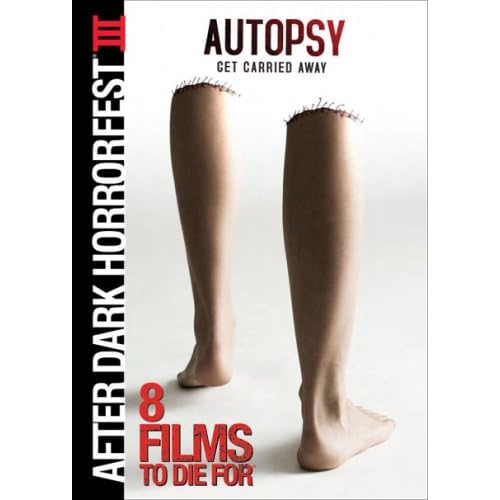 It is hospital horror, with all the standards of that genre. Moody hallways with poor lighting. Old equipment for rusty cutting pleasure. Strange utensils for removing delicate organs. Distant shadows stumbling in bloody hospital gowns. Midnight noises and clicks. Disorderly orderlies. Emergency room doors with antiseptic appeal. Squeaky wheeled gurneys. People moaning around some corner up ahead. About the closest we get to a switch up is lumbar puncture instead of a defibrillator.

This is not a complaint, altogether. Even though the two best bits of this movie, the cinematography and gore effects, are both heavily in the homage-cum-pastiche camps; several scenes are so clever as to be textbook worthy (especially the organ-mobile scene at the climax and in the trailers). They just they feel, outside of single shot or two, done before*. The acting mileage may vary, but the casting director did a good job with assigning those on-screen the most the better actors overall. With possibly the exception of the drugged out "bad boy" victim whose general impression of being too-high-to-die is like a Saturday Afternoon Special on Tourette's. Robert Patrick is in his "have you seen this boy" creepy best, and Jessica Lowndes plays the heartfelt opposite—the medical dropout who still cares versus the manipulative doctor who has crossed the line.

Where the movie screws up, and gratuitously, is in its either inability or its apathy toward making many of the medical scenes feel like anything other than disheveled set pieces. That, and the disjointed illogic behind most of the "better" scenes, which I started thinking of as creepyparsley (yes, a joke on "creepypasta"): garnish for the sake of color and not for flavor or plot. I am not expecting realistic fat cells interwoven through proper thickness intestines but this movie's concept of abdominal incisions was tearing through a thick or thin latex into a pouch of disconnected jelly guts surrounded in strawberry jam and corn syrup. The "fingerprint grinding" scene shows an attention to detail that most of the disemboweling scenes steered clear of. Having a scene where a unattached stomach comes out full and whole not immediately kicks the viewer into "its a prop", like watching a magician whip a stuffed bunny out of his hat. Worse as a latex-tummy scene is a post-experimental victim falling on top of one of our young-pretties and she reaches up to push him back and his skin tears like moist wax paper and bits fall out in the wrong order. I think "the wrong order" was the purpose, but still the creepyparsley set up to get her there was bits of weird and "oh no!" with little sense, much like the organs in that man's cheap condom of a midriff**. Had this movie been about ghosts, it might have worked.

All this is really a shame because there is lots of good to praise. Right after that scene, the newly blooded young-pretty is knocked out by a disaffected punch whose ironic contrast sets you off in a giggle. Later, a desperate flight ends in bad-break capture; a capture spoiled by a cute and drug-cultured bit of good luck. And the classic "Oh, officer, she's crazy and sorry she called" point point is twisted out of expectation by one of the gleeful orderlies walking a cart full of organs right past the cop they had just convinced to go on his way. Not kid-friendly humor, for sure, but all of those will bring good laughs to horror fans. Keep in mind that we are talking about a movie that starts out with a group of drunk young-pretties hitting a guy with their car...and then taking care of him. Except that turns out to be the wrong choice, too. It's not exactly , but it does bring about one of horror's truest morals: bad things happen.

The sloppy organ handling does not cancel out the gore, and the questionable storyline (how exactly does four baddies deal with that many patients...and how come so many patients are allowed to walk around?) does not quite cancel out the more delightful scenes, but the movie is on the lower side of Fair (-0.3). Grab some drinks and some friends and just play along, and it might be even a good way to spend a Saturday night.

* The most notable of which is a possible shout-out via an oxygen tank to a man's face.

** According to an interview, the MPAA enforced a handful of cuts on the film. I don't know if the unrated DVD has the scenes back, or if some of the questionable shots were designed to lessen the impact on the rating.