Time for the second Dickens of a Blog cigar review! This time it is Punch's Rare Corojo Double Corona. A 6 and 3/4 inch cigar, ring size of 48, it's approaching the more serious size of cigar smoking. I picked this one up, like the last one, at the Vintage Wine & Cigars shop in Bridge Street (Huntsville, AL), and it cost me an even $8 (online prices for the same are much closer to $5 per cigar, just FYI). I had it in my humidor for a couple of weeks prior to smoking. 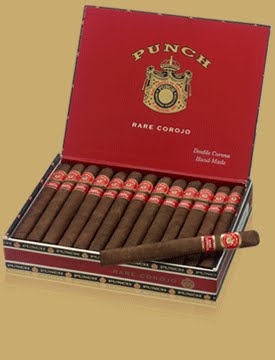 Cut it straight and lit with a couple of matches to get it going. To set the stage, it was a late (-ish) Saturday night. I was relaxing in my study and I had unsweet tea on hand. Kind of unformed in the taste to start, but after a dozen puffs, and moreso through the middle of the cigar, it came across as a sort of dark chocolate taste with a light pine infusion. Maybe a bit of sweetness. The room-note was a bit more non-specific evergreen, cedar in with the pine, and it leveled the sweetness out into a more general earthiness. Nice effect when that room-note of earthiness cycled back into the overall taste. Had I been outside, this cigar would have come across as different without that "feedback" loop. The flavor never really felt strong (except see the nasal exhale notes, below) and it could have been, excuse the pun, punch-ier.

Burned fine enough and smooth. No relights or corrective lighting required. Outside of a slight "wobble" to the burn in a place or two, came down flat and even. Never developed a char flavor and ash was mostly light and firm. The wrapper had a tad bit of flaking about three-quarters the way through, but prior to that it handled itself nicely. Smoked it for nearly two hours, and could have probably stretched it to two hours if I had been inclined. Absolutely no nicotine overdrive side-effects, just a good relaxed feeling, so I would put the strength around medium.

The primary thing that stops it from being a perfect "little" good priced (outside of Vintage's prices) mid-strength cigar (worst sentence in this review? you betcha!) is the nose-note. Exhaling through the nose introduced a flavor that I could only describe as wet pine, a swampy sort of blend. Diffused throughout the room-note, that swampiness played itself out as the slightly sweet earthiness. In the nose, though, it was not a pleasant flavor to get caught up with. This tempered over time, but there you go. I know many recommend the nasal exhale, and I often like to mix it up depending on the smoke, but this one I only gave it about five shots before I was done with it.

Only slight demerits, though, since when I am in the study, I tend to be more of a room-note, ambient experience sort of cigar smoker, and it did just fine there. My grade, Fair at Vintage's prices. If you can get it more normally priced, I would up that to Good, for what it is. It's a 100-minute medium-strength and medium-flavored smoke. It behaves nicely, doesn't go through any crazy taste-changes (which well, I would prefer it change more than it does), and won't really leave you with any weird stomach groans. In fact, I was pretty empty-stomached when I smoked it, which can be a recipe for disaster. If you have a dad or husband that is coming into the cigar hobby and they are at the stage where they want a longer smoke, a box of these will run you about $110 for 25. Not a bad price and by the time he is done, he'll be ready to head over to a slightly heavier cigar.