I am not the biggest fan of Terrance Dicks' —a novel that is about four-parts fan service, three-parts political quagmire, and only one-part character—but I am a huge fan of the Eighth Doctor (mainly through the Big Finish line of audioplays, mind you), so I pretty much had to continue the EDAs (Eighth Doctor Adventures)*. Another thing that I am...skeptical..of is the universe's ability to suffer prolonged exposure to more classical myths, like vampires. It most definitely can spin an old campfire tale into something new and fresh, and has done many times; but its strength tends to lie in its new creations. Vampires are public domain, so to speak. Well known. Well attributed. Every version has its own little perks, ups and downs. Can the Whoniverse take a fourth outing with them (following , the Terrance Dicks penned serial that started the connection, its direct novel sequel (also by Dicks), , and a slightly down the road novel called ). In each version, vampires toned down just a bit, became a little more common place, in every since of the word. I'll get to the end-result in just a moment. 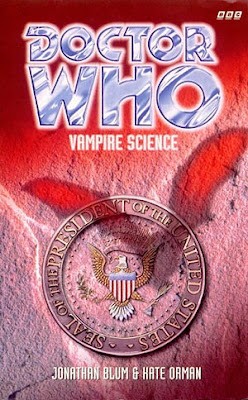 Joining the Doctor is Sam Jones, the Dicks created (I think this might be the last time I say his name) new companion from the previous book; a General Kramer from UNIT who was introduced in the Jonathan Blum fan-film , and Carolyn. Interestingly, Carolyn is pretty much a Grace Halloway stand-in. Rather than the end of The Movie, where Grace stays behind, Caroyln stays behind after watching the Doctor fight off a vampire. Outside of that difference, there is little else. The book even takes place in San Francisco, though it would require a bit of Timey-Wimey since it actually happens a couple of years before the setting of The Movie. The other two companions work well enough. Sam Jones is still a bit in development, but the young near-rebel (a little bit like Ace tempered with a bit of, hmm, maybe Jamie) makes do as an impressionable companion wanting to impress and emulate the Doctor (and, of course, dealing with a crush on him...notice that Sam Jones was an alias taken on by Martha Jones in , who could kind of be thought of a mash-up of Sam and Carolyn). Kramer is, well, a fan-creation. A brusque, large black woman, her main role is to act as substitute for the Brigadier with just a little bit of a different edge. For instance, she sees the Doctor's personal failings and comments on them, while the Brigadier was more interested in the practical uses of the Doctor.

Ok, the rough story. Doctor is summoned by Carolyn because her boyfriend is missing. Vampires are involved. The Doctor and Sam investigate and find a small clan operating in San Fransisco. As they get more and more tangled up in this, they find the head vampire, who appears to be a middle aged medical scientists. She is on the brink of a no-more-humans-required blood solution, but her younger brood is caught up in the thrill of the hunt and the internal pressures are threatening to unbalance the clan. In order to prove that he does not want to merely wipe them out, the Doctor enters into a blood pact (linking him to the head vampire) and tries to help her to overcome her trouble-makers. Tensions build up, mistakes are made, and hey, that's .

There are two big themes in this, outside of the vampire elements. One works, one doesn't. The one that doesn't work is the "huggy Doctor" theme. The Eighth Doctor is full of hugs. In this novel, he is trying to make the Eleventh Doctor seems unloving by comparison. In one awkward to read, to picture, and to act out scene, he is cooking breakfast and hugging Sam. Trite. Unnecessary. And it comes across as someone not quite sure what to make of the scene between the Eighth Doctor and Grace Holloway from The Movie. By the end of the book, it is addressed openly and toned down, but I don't like it. Especially since this takes place three years into the Doctor's regeneration. That weird "early days" syndrome he gets would have warn off completely.

The theme that does work, and is contrasted to is the question of trusting the Time Lord. For all of his "down with the people" ways, Theta Sigma is still quite a bit Gallifrey. Since the Hartnell era, and maybe more so in Troughton, one strong character trait of the Doctor is that he doesn't share the whole picture. Nearly ever. He almost always holds something back. This is stated most bluntly in "The Big Bang" with River Song's "Rule number one: The Doctor lies." And he does. He'll act outnumbered, at the end of his rope, and then suddenly flip off all the defenses in the enemy space ship and, you know, turn one of them into a scarecrow or something. This element was explored back in the UNIT story arcs, and rumbles of it were brought out briefly during the Romana/Adric years, but this novel addresses it widely, in a number of ways (emotional trust, practical trust) and it ends up with the same basic answer that the entire series and all of its spin-offs have put forth: they may not want to, but nearly everyone who meets him ends up going along with his plans...and even when they get hurt by it he tends to make it mostly alright.

As for the vampires, they barely had enough steam to make it to the end of the novel. There is are two key build ups towards the end, one at a club and one at a theater, and the tension nearly holds to the first one and has bottomed out by the second. The story still flows enough to get by without requiring an obvious hook, but once you have established that the Doctor can more than handle them (he and the other Time Lords are something of a dark legend to the vampire kind), and the previous novel had a turned-companion and the prior two stories had bigger vampires and more; what can you do? Just drive the point home by having them beaten again? The attempt at empathy, including the direct contradiction to the tenets of Rassilon, were a nice touch, and about the last card left playable unless something else happens (faux-vampire tales like "Venice" not counting).

Which leaves just the final scores for the novel. It felt like it should have ended about fifty pages before it did, so that's a minus one, and it had little new to say for either vampires or San Fransisco, so that's another deduction. However, the roguish Doctor negates one of those minuses and both the mystery of his three missing years and the development of Sam Jones negates the other. The hugging counteracts the pace and character of the novel, both of which fit very much in the "new-" style. I'll let it come down to personal tilt, and say this one is better than but is flawed by the fandom-ness of it coupled with a need to be tightened (Russel T. Davies, who is excellent at getting the point of scenes, could have made this into an interesting two-parter). The final score will have to be a straddled Fair-Good (+0.5) with bonus marks for Weird Harold and minus marks for Carolyn's sycophant boyfriend.

PS: No, by the way, I don't remember there being a reason for the president's seal to be on the cover...unless that's a tongue-in-cheek nod towards Rassilon's seal and the novel being set in the US.

* For right now, I'm skipping Dying Days but will come back to it.