"This next bit is best viewed from behind the sofa." [Ace]

Just for purposes of full disclosure, let me admit that I avoided the "lost years" novels for a while: the Virgin New Adventures and Eighth Doctor Adventures and such. For reasons that I think this book exemplifies: a certain un- element written on a different scale than most of the series proper. Involving stranger, less balanced companions and complicated multi-generational plotlines that partially "fix" missing bits from the show, through means that can be as groan worthy as whatever one-off plot-hole they might address (see the various I.M. Foreman references in the books' various story arcs).

For instance, (the 28th Virgin New Adventure novel and the second one, I think, by Dicks) is both sequel and expansion for the storyline. It fills in gaps from the world, making it more feasible as an ecosystem, and shows the aftermath (technically a second aftermath, since Dicks would later show the more immediate aftermath in ). It is also a playful and often unbalanced romp through Capone-era Chicago, complete with faux Noir dialogue and hardboiled dicks (pun intended!) facing off against Tommy Gun weilding thugs in suits. And then there is Bernice Summerfield (I suppose the most significant non-TV canon companion) trying to build a parlimentary style goverment while facing off against vampires and blood-thirsty rebels on 's planet. Back to the Doctor in Chicago, he is pretending to be a small-town thug and fake smokes and real drinks through Prohibition. The Chicago scenes could have worked if they were a little more and "The Vampire Planet" scenes had lots of potential but were overshadowed, likely to keep the overall focus on The Doctor. We end up with two disparate threads unceremoniously tangled together by the medium (they are both in the same book, after all) with only a tiny knot at the end holding them together. A knot hinted at throughout by men in black robes saying, and later poking some self-fun at, a rather blase ritual chant. 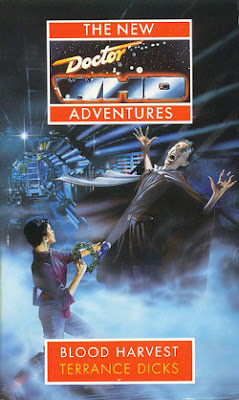 Notice I used the word "fun" up above. I would say the two novellas and a story hook (which later was revisted and in the Gallifrey segment of ) shoved into the facade of a single novel has its fun moments. Some are intentional. Plays on story themes, watching Ace kick ass, and reading Benny's self-denigrating commentary. The gangland aspects are best early on, and get a bit "eh" as they progress. At least the baddie has a certain sense of danger about him. And some of the fun elements are entirely meta-, like playing the "Why?" game. Why does the Doctor break the long running tradition of keeping his outfit even when it is most out of place? Why does a time traveller (time travelling duo, since Benny is also of the persuasion...or even trio since Romana is involved) have to split up his resources/people across two planets to handle a problem in two different time periods, anyhow? Was he afraid he was going to get distracted and forget one if he handled the other? Why are there a half-dozen references to the Doctors untouched but smoldering cigarette? Why is Ace written as if she was essentially a more violent Leela? Dicks knows the ins and outs of the -niverse better than most, but it barely feels like a story at all.

I like the main baddie. I like some of the Capone aspects. I kind of like the hardboiled companion. Doesn't really feel like the Seventh Doctor. Doesn't really feel like Ace. Romana is just there, mouthing lines. Benny is one of the few recurring characters kept in character and I liked the follow-up to Ivo. The expansion of "The Vampire Planet" is nice, but the expansion of Chicago feels half-finished. The writing is alright, but the triple headed plot needs to be lashed together better (and one or two heads could have easily been lost). The overall product is pretty Meh, mostly recommended for the set-up to later novels and for a glimpse into some Behind-the-Scenes of Dicks' mind.