The Madison Street Festival (October 2nd, 2010) [Mom and I, Bellydancing, and The Boy. w/ some pics]

The Madison Street Festival (October 2nd, 2010) [Mom and I, Bellydancing, and The Boy. w/ some pics]

Right smack dab in the middle of one of the busiest fortnights I have had during my grad school career, two things occurred: my mom came up to visit and Sarah had a bellydancing performance at the Madison Street Festival. Which meant that the two events could be combined, my mom would get to go the festival and watch Sarah dance. This also meant that the weekend, for me, was practically shot. I could have begged out of going, maybe, but let's be honest: I have no spine. Mom + wife is something like an unbreakable responsility. You know and I know the price to pay would be too high. 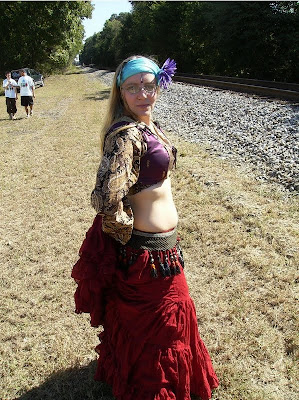 [Note: click on this picture, and the rest, to see a larger version]

Think something like Panoply, except smaller, less authentic feeling, with more vendors, and people doing their best to emulate the "rabbits squishing each other" scene from . There was no room to park at the festival, so you had to park about a mile or so away at the Madison Stadium, and then take a shuttle-bus over. Which would have worked except about half the people decided they would rather walk and the entire trip was spent wading through pedestrians clogging the roads. The whole thing was free, which is a plus.

Sarah went over to her stage and started getting ready, and my mom and I had half-an-hour or so to wander around. My mom originally planned to park on a bench and wait, but I got her to come with me. As a note, walking with my mom in crowd is an experience. She flies through things I find interesting, sometimes with snarky comments, and then will plant in front of some display that I barely noticed and had no care to notice. Case in point: she loves cloth things. We would come up to a booth full of towels and she would drift over. I would go over to some wood carvings and she would say, "Hmmph, made in China," and then walk off. Toss in enough people in my personal bubble to violate fire code and there you go. 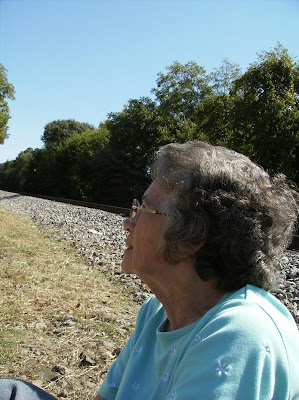 After skirting down a row of booths that were mostly advertisements and political, I found a second row that were more crafts. Then I found a row that was made up of local and near artists. As the rows interested me more and more, they were also less crowded (there were very few people on the artist row, too many people on the advertisement/cause row). I guess this works out because the more I wanted to browse, the fewer people I had to contend with.

Along the artist row, I came across Yuri Ozaki's booth. I bought one of her smaller watercolors showing a sunset scene across Big Spring Park (similar in subject to this one, and I would guess the same dimensions, but slightly different angle and overall color scheme). I am a huge fan of watercolor as a medium, especially "sloppier" watercolor that dances around impressions of scenes as much as pure shapes of scenes. Yuri's regularly involve downtown Huntsville scenery and I have wanted to get a couple more for a bit (I had a night time at The Kaffeeklatsch one, already). Night time, sunset...I guess I need to pick up a day time shot of somewhere else near downtown and display them as something like a triptych.

We got back over to the stage in time for the performance, which started about fifteen minutes late. The stage wasn't very big, and the "backstage tent" was some tiny thing that couldn't have been enough room for them to get ready. The only source of shade nearby was the stage itself, which meant that the viewers and the dancers had to sit out in the sun, which was just hot enough to be uncomfortable. I picked a spot near the railroad tracks over to the right.

Their set list was similar to what they had at Panoply. Sarah was in a dance that she wasn't in, there, maybe even a couple. I'll get confirmation from her. Unfortunately, a combination of the relatively darkness of the stage with the not good quality of our digital camera left a lot of shots to be desired. Add to this a slightly delay that would often come up between pressing the shutter button and the actual camera taking a shot, and you had less than twenty really usable pictures out of over a hundred taken. Ah, well, c'est la digital photography.

THE BOY AND THE BALLOONS

Pretty much the entire time that Sarah was on stage, there was this young boy running around on the railroad tracks. A few minutes into this activity, he started gathering up pieces of scrap iron that were scattered on and near the tracks, and piling them up. Over the half-hour to hour of dancing, he had a nice little pile building up. At the end, he even started to stack it in strange ways on the tracks themselves, making these odd little structures out of it. Then some festival volunteers ran over and started shouted that he couldn't be doing such a thing. He told them, very matter of factly, that his dad had said he could. Eventually some head honcho of the volunteers came over and started knocking the iron piles around and scattering them. The Boy's dreams of an iron city were dashed, and he went back over to watch the dancing.

Also competing for my attention was a series of balloons that kept drifting up into the sky. Lots and lots of balloons. Some were probably let go on purpose, but I imagine others were more accidentally "dropped". I tried taking pictures of these floating balloons, but often my camera would decide to focus on some other, random spot in the sky and the balloons would be some out-of-focus speck on the side. The only one I regret not being able to keep was a shot of the balloons floating in front of the moon. 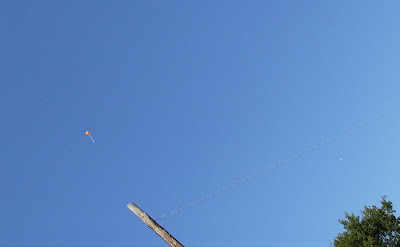 And that pretty much wraps it up. Still haven't had much down time since then, and will be getting some today. Enough good things happened because I went to even out the bad, annoying, or tiring things.

Oh, afterward, went to Pizza Hut with my mom. Kind of an odd experience. She doesn't often go to restaurants and hang out for a bit. Fact is, when I was growing up, I don't think I ever saw her eat in a restaurant. She would get the food to go and then eat it in the car, sometimes on the road and sometimes in the parking lot. Sarah and I had slotted an hour to eat and relax after the Festival, and about twenty minutes in, my mom was already talking about leaving and how she was going to get her drink to go and such. We looked at her and said, "Um, we're still eating and relaxing." She went outside to smoke and I ordered desert. We even told her this when she got back but about five to ten minutes later, she starting staring at the waitress and making grunting noises. I asked her what was wrong and she asked, "Where's our check?" in a frustrated way. I told her, again, the rest of our meal hadn't showed up yet. After that, she calmed down. Next time she comes up, I'll take her to the sort of place you get your meal in stages so she can see that not all food has to come out at once and be treated like fast food.