[REC] 2, a horror movie sequel that follows the sequel's main rule: you have to change the rules...

[REC] 2, a horror movie sequel that follows the sequel's main rule: you have to change the rules...

In the trailer for , the horror-movie as parody of horror-movie explains that "chapter one sets the rules" and "chapter two bends the rules." This ends with the claim that "in the finale," you see, "forget the rules." Let's put that last bit aside and focus on the rule bending second chapter in a franchise. If I had to sum up the driving energy of a horror sequel, a good sequel as opposed to just a dollar sink for bored teenagers, I would say that the two main things outside of simply continuing the storyline is to look at the events of the first movie in a new light and to change the stakes (usually by increasing them). This is why sequels like work. It wasn't the same sort of monster. It had different rules, different motives, different aspects. Just like the victims were different, not just a single mining crew, but an entire colony was wiped out due to greed. It continued the mythos of the first film while simultaneously tapping into its own. It played by the rules by bending the rules. 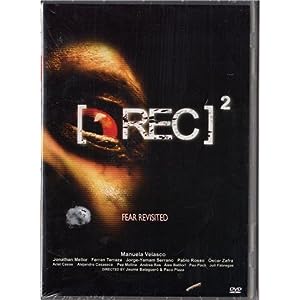 For those that don't know , I'll avoid making the little "dot" symbol, it follows a reporter and her camera-man on a "up at night" sort of special involving firemen. Shot in the "shakycam" method of horror filmmaking, this time the cameraman being the source, they get a call to an apartment complex to deal with a collapsed woman, but by the time they get there, they find things spiralling out of control. Apparently the collapsed woman is getting back up and attacking them, and the entire apartment complex gets shut down into an intense, sniper-maintained quarantine. It ends with a night vision scene as the final victim of the movie cannot even see her attacker (neither do we, but we do see her drug off into the door, screaming). , still in shakycam form, follows essentially right after and during the first movie. Its primary characters are a group of special policemen (I'm assuming something like America's SWAT) led by a Dr. Owen to investigate and find survivors. They find mostly blood and shouts in the distance. It is not long before the creatures from the first start attacking. Things go pear shaped. Explanations are given, some are completely surprising, and we have our movie.

There is, about twenty or so minutes in, the explanation. I have a feeling that people are going to be torn between hating or loving the movie for it. I dug it. It was new enough. Still scientifically quirky enough to have potential. Others, though, have reacted quite negatively. I'll not spoil anything, but I'll throw its existence out there for you. As either a reason to see the movie, maybe, or to avoid it if you think the first is absolutely perfect and any variation on its themes will ruin everything. Having a non-standard explanation frees them to try new things. While the first one is, for all intents and purposes, another entry in the MTV-zombie genre: this one has new features to try. I dug it. Seriously. Parts made me go "meh" but mostly I liked the experimentation.

The two shining moments of the film were shooting the events from multiple angles, and the use of head cams to compliment the hand cams. The different angles were not used so much to a effect, but more to fill in gaps and to give different impressions of the scenes. A lot of shakycam footage has a necessity of being linked to single camera and shot in a faux-amateur style. The multiple cameras allows for different degrees of professionalism to show up in the shots, and to have different vibes of lighting and approach. The head cams especially thrust us into a POV, first person mode. We see to the side when they turn their heads. We look up and down with them. I wonder how well a first person horror movie would work, without the "trick" of head cam being necessary. Just a slasher that follows the viewpoint of a main character? I would like to see that, I think.

On the downside, there are moments just not realized properly. After the first half of the film is up, we jump back to the start of events and follow a group of teens who sneak into the building, more or less for the fun of it. With a camera. While it is interesting to see how much less controlled their camera work is, and their different tempo of reaction, the time stamps feel off (and what camera records the battery charge unto the film?). At least, in their case, there is the idea that they are turning off the camera to save batteries. Some are not going to enjoy a few of their reactions, though, replacing the downward spiral of the soldier types with the instant freak out of teens breaks some of the suspense the audience might have, especially the degree of comic relief wedged in. At least knowing what happens in a few of the scenes before the teens get there (having seen, say, their aftermath from another perspective) works well to establish suspense. As for the "thesis" of the movie, building up to another climax in the penthouse apartment, it felt like it wasn't entirely maintained, but it had some definite horror potential.

All in all, better than most horror sequels and enough to keep me excited from the prequel/sequel that is due to come out over the next couple of years. It's score is somewhere between Fair and Good, with a possible rewatch of both of the films to change my mind when seen in context. Since the film is fairly continuous. I wonder what it would be like to take both of the movies and to rearrange the shots so they take place in their proper time, including split screens where necessary. If I ever get bored one day, I might do that.