Is... is this meta? A movie filled with questionable CG horror effects about a haunted house attraction that has cutting edge, but still relatively questionable, CG effects via holograms that first scare and later kill? Oh, that blood splatter doesn't look real enough? That's because it's supposed to be CG, doofus, now watch the movie. Oh, and the actors in the movie? Most of them are playing amateur actors. She's hamming it up! Of course she is... How can you win against an argument like that? You can't. Brilliant, , just brilliant. 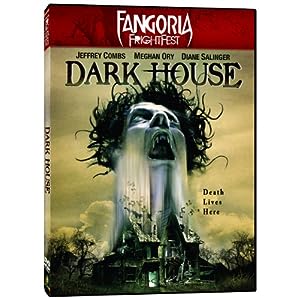 Ah, a plot? Right. Claire (Meghan Ory) is sent back to the Darrode house, where she witnessed something horrible 14 years previously. Her therapist thinks it will be good for her, to help her overcome the trauma that left her depressed and anxious and a cutter. Claire is unable to do this on her own, but when Walston (Jeffrey Combs) comes to her "advanced acting class" and asks for some temps to star in his new Dark House attraction, a haunted house opening in the old Darrode house itself, it seems like a win-win. She gets company to face her fears, Walston gets the actors he needs to put on a preview performance, and her acting class gets paid $300 a piece. Dark House is not your average haunted house, it is stocked with state-of-the-art holographic projectors that detect people wandering around and displays random horror vignettes that seem to interact with the patron. Think X-Box Kinect, but with flesh tearing demon thingies instead of, um, whatever things you get with a Kinect. In the midst of the preview, which is actually going just smashingly, the evil that once made the house a tragedy comes back, and things spiral down to their inevitable conclusion.

What you have here is for a new generation. Gone is the 1988 simplistic charm of plastic and blood pack horror effects, rendered "real" in wax with homages to Universal and Hammer. It is no longer a house of wax with a dark secret, but now a house of holograms with an updated repertoire. Zombies, killer clown things, chicks with long fingernails, poison breathing bathtub inhabiting things. If this movie lacks 's iconic badguys, settling for a more generic "Things that stab" or "Things that melt your face" troupe, maybe that is a statement in and of itself. What horror icon has come out of the past few years that is not considered a property or a brand, rather than something more universal?

Chances are, if you are going to enjoy this movie, you are going to enjoy it for Jeffrey Combs, who pumps enough charm and energy into his role as horror fan, house proprietor, and theme promoter to make up for the lack passion shared by a few of the others. That, and the odd little jabs, pro-horror fist-pumps, and jokes that float up. The "debate" between the horror mag fan writer and the USA today mainstream reporter and the pro-horror rant by Walston—who proclaims horror as relieving the need for tension and fear in our lives in a safe way—are a nice edition without being to terribly preachy. The jokes range from flat—"War is hell," deadpanned right before being shot by a soldier—to the pop-kitschy—a lesbian character grabs her latest crush and shouts, "Come with me if you want to live!"—to the random—"She had more bugs than Windows Vista,"— to the semi-surreal&mashas when multiple characters whip out a lighter at the same time to light their way in a newly dark house (pun intended!), despite no evidence to this previously, one intones: "It's a good thing we all smoke."

Remember that bad CG and the amateur actors? Yeah, well, that only gets you so far as an excuse. Some of the effects are actually alright, a scene involving a garbage disposal comes to mind. Some are atrocious: a recently beheaded guy spews digital blood that would have looked lame for . And the acting? Can't actually fault most of the actors. Even when they don't feel authentic, they fall in place with the others around. The weaker ones are buoyed sufficiently. Just keep in mind that this movie has a ghost hacking a -themed mainframe, by showing up on the monitor and spinning around and making "Wearrrhg" noises as huge letters proclaim things like "Trojan detected!"

Suppose it was a Fair movie overall. Bad bits were outweighed, mostly, but fair to good bits. Would watch again, but will be drinking next time.