Summary: Munchkin Cthulhu is a parody/pastiche card game set in the world of HP Lovecraft's weird fiction, as well as the fiction of his fans and follow-up writers. You fight eldritch beasts with bad-puns for names, collect ancient weaponry, and mostly just backstab your friends. There are Epic Rules that extend the game play, but how well do they work. I discuss.

Last night, sat down with my wife and sister-in-law to play an "Epic" game of . For those needing catch-up, is a stand-alone set of cards for Steve Jackson Games' franchise with a focus on the Cthulhu mythos as a horror setting. The Epic Rules are an optional set of rules to extend your game past the 10th level. You face more dangers but better feats. It was originally tooled around the default, fantasy-centric basic set, where it matches the upper-level campaigns you might find in any Fantasy roleplaying games: bigger baddies, bigger goodies. How well does it work for a weird fiction horror based game, even one with a comical bent? Well...let me give you the game summary first. 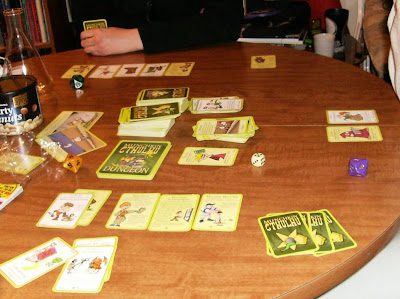 We were using all four sets (base game, plus the three expansions; see link above for their description) and had tossed in a couple of bonus items (Chibithulhu and Cthulhu Dice) just for fun. This means we were playing with "dungeons", which are meta-cards that are in their own seperate pile and they change the rules of the game in ways that can be minor to major (for instance, one card we played with prevents anyone from winning through level count, though in , presumably the "highest leveled cultist when everyone's a cultist" victory would still play). You have cards in your door deck that will switch out which dungeon you are in, or put you in more than one dungeon, and throughout the night the rules shift around and cause either a boon or hardship.

The Chibithulhu bonus rule allows you to become or cease being a cultist once per Chibi (or something to that effect). The Dice bonus can be rolled after combat and can either add treasure, levels, or penalties (it is generally weighted towards good thing). Can be applied once per color of dice per game. Sarah, with her Chibis, stayed a cultist the whole time. The only time I even thought of trying the Dice trick, I was horribly punished and lost all my neat stuff and spent much of the rest of the game in third place. Damned laws of chance.

The game proceeded normally over the next hour and a half, progessing into the Epic levels and having a number of dungeon changes. There was one, "Dungeon of the Dholes" or something like that, where you lose a level or sacrifice an item every turn. It stayed in play a long time and is probably responsible for half-an-hour of gameplay by itself. What ended up being the most significant card was one that stopped winning levels from counting as winning levels. This meant we had about twenty minutes of game play where there was no winning level and we kept building up (not much over 20, mind you). Finally, the whole thing came to an end when I discarded everything as an Epic professor and then sold items and shot up a couple of levels right before the next round when a portal card was played and the "no winning levels" dungeon was discarded and so Alicia and I won at the same time.

What about Epic games? In the Fantasy setting, they seem to be appropriate and fun. As a straight time waster, they are also kind of awesome. However, for a game set in a [parody of a] world where the more you know, the more you see, and the more powerful you become...the more destructive and on the brink of destruction you actually are; it doesn't quite feel right. In fact, as long as you avoid death, it actually gets much, much easier in the Epic levels. There is a chance than you can turn over two monster cards (the first change in Epic is that you flip two door cards and play out the effects semi-simultaneously) but the monsters tend to be kind of epic and a little sparse. This greatly increases the chance that you will have only about 20 levels to fight on a bad flip and since you are talking about characters with a base score of +15 and with double digits of item bonuses, there is little real challenge (we didn't even have to ask for help). This feels off for the setting. The worst moment was when I drew a Great Cthulhu card and a +10 bonus for him and I was able to beat him with a cople of one-shot enhancers.

To sum up: the game we played last night was awesome, the game is itself awesome, the dungeons expansion is ok but some dungeons will earn your ire, and me and the Dice bonus rule are no longer on speaking terms and it will not make a return appearance. Using the epic rules in the Univese? I'm not quite feeling it. It doesn't feel balanced for it. Maybe something like a dice roll for every level you go up to see what "madness" you develop? I don't know, but it just felt like a balanced game turning a bit soft.

OTHER BLOTS THIS MONTH: December 2010