Summary: I should have been in bed today but instead: I made a project. One of my first search projects in a long time. It looks a bit wanky, is still a tad bit in complete, but I like. I give you my permanent, home-made standing desk.

After pricing relatively small, cheaply made "standing-style desks", Sarah found out that the price range was about $200 or more. By the time you got regulary sized desks, just taller, you find costs to be fairly high (easily +$800), partially because people are convinced that no one wants to stand all the time so they have some sort of pivot, hinge, or sliding bar to adjust the height.

I knew I could undercut this, and get one custome sized for me, and so started looking around. My initial plans were for a single 4x4 (i.e. four inches by four inches, give or take some loss due to sanding, etc) with a slight angle cut. Then, a 2' by 3' (maybe, give or take based on balance) piece of flat board was to be nailed to the top, at said angle, with a handful of thin, balsa strips used to elevate (and cool) the laptop as well as prevent it from sliding forward. Then, the angled piece cut off was to be inverted and put on the flat board to make a spot for sitting drinks, etc. It was going to be cute and cozy, but likely way too small.

After pricing the wood and making some decisions about the layout of my study, I decided the best bet was to actually go for a full sized desk (in this case, about 2' by 4') and then make it good and sturdy. Which in mind was four 4x4 posts as legs. Note: this is overkill. 3x3 or 2x2 is likely plenty. However, my desk could probably be turned into a slightly overly tall guest bed (for short people) if need be. I got 1x2 slats to use as bracings and to help it hold form, and the top is compressed board (not particle board, but someone might know the more specific name for it). Essentially, the slats are put at (random) heights on the back and sides, to stabilize it. Initially, the plan was to put them in kind of stylish arrangement, even though no one really can see them in its location, but, well...the anecdote...

I have been sick for a couple of days, and today was the worst day yet, but I wanted to get it done. Sarah hasn't got a lot of experience with such projects, but she was game to partner. On top of that, we were missing the two most basic tools for such a project: saw and an electric drill/driver. We also needed a better level. We got all of these things (eventually) but our first brush with building was problematic because we were trying to make due and we were trying to do this in an apartment (as opposed to proper shop environment). We also had an error in measurement that resulted when I copied down a couple of numbers incorrectly from my plan. By about 6pm, a couple of hours into the project, Sarah's nerves were heavily rattled but I made a decision that helped. Essentially, rather than try and get everything sawed out and level on carpet with things wanting to be flimsy, I used the slats we had to screw everything together and get it stable. it made it less pretty, but that's fine.

The next clincher came when I was doing the screwing by hand (go ahead, laugh) and that was taking too long and the pressure wood was too hard (ha ha, feels good, right?) and so, well, we dropped about $70 dollars on a good drill/driver set with proper bits and such. Saved us possibly hours. Fact is, without such an expenditure, possibly wouldn't have been possible, and an axe with a small, commeorative bonfire might have been required.

And now it is all said and done, and there's a picture below. Cost of materials: about $30. If you want a good staining, decorative look, go ahead and add another $20. Cost of equipment: about $80. But hey, that can be reused. Anyhow, if I had to change anything, the following things occur right off. A) Even though it is the perfect high for reading, writing...the extra half inch of the laptop is slightly awkward. I would possibly try and compensate for this somehow. B) I need to sand the front edge so it is not so sharp. C) I need to make a slight foot rest, and I have an idea how (basically, a sturdy bar across the front about half a foot off the ground). D) I might want to replicate the slats in the back in the front. Just one, right up high, to help support the weight in the front middle, where the weight will be the biggest unsupported issue. Outside of that, it is a nice little bit.

Since I am about twice as tired and sick feeling as I was when I'm started, I finishing this up by going to bed. 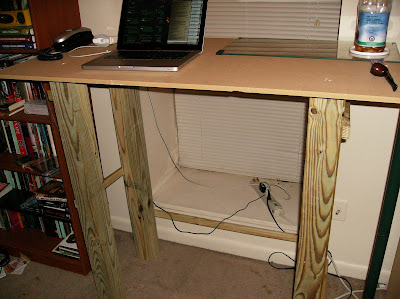