Summary: Quarantine's sort of a rage-virus is back, this time on a plane and in an airport terminal. The movie is a Frankenstein's Creature of bits of other horror movies [including it's predecessor] but manages to entertain once it gets going].

was a 2008 remake of the Spanish (2007), and both feature late night news reporters trapped in an apartment building locked down with a strict quarantine as neighbors turn rabid, the military shoots people trying to escape, and the cameraman catches all. One of the more natural uses of the handcam genre, it still has a few problems (the American film has a cameraman holding down the record button down as he smashes a maybe-infected rodent?), but was overall a quite entertaining experience. Back in homeland Spain, the original got a sequel set a few hours later in the same apartment building, one that was a bit more violent and up close (the cams, this time, are in the helmets of soldiers to start, so it has an extremely right-in-the-action feel) and one that takes the background off into a definitely different area than one would first assume. , however, is all for playing with more of the same, just this time in a different location, and while it gains few points for risk taking, and sometimes feels like a greatest hits compilation from movies that its makers loved, it makes for a decent horror excursion. 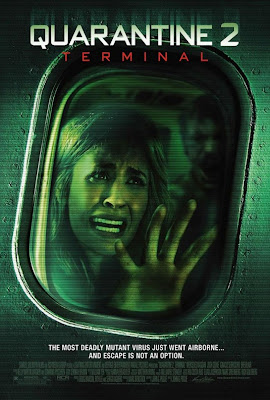 The movie starts off with two stewardesses coming in, after a concert [what band was it? I don't know, they flashed a CD but I couldn't read the title], for a late night flight from LA to Nashville. We get standard character establishing banter—one is getting married, the other one is being pestered by her dad to attend flight school—and then a series of semi-introductions where characters are introduced to greater and lesser effect, and an overall tour of the plane. Which is pretty small (one of those 2+1 deals with only a small section of seats). We get another spiel of character facts—he's off to see his grandkids; he's a fat drunken golfer; she's a cat lady; he's a prick on a cell phone; ha-ha zany foreign couple are into blowjobs on airplanes!—and, better than that, we get a little playful game where a number of people are potential sources for the sure to come outbreak. Dude is bit helping a man try to load hamsters for kindergarten class, two dudes with the sneezing, including a one who got it....from neighborhood dogs? We even get an old lady and her cat that came from an apartment [get it? huh?]. The viewer knows one of them will trigger the disaster and, sure enough, one of the many red herrings turns out not to be such a false lead after all.

Let me take a moment to talk about the cast and characters. I'd say there are mostly good things. Lamar Stewart's character is a black man and a business sort who manages to not get saddled with the typical random stereotype bullshit we've all seen before. Mattie Liptak plays the angsty child of a broken home, George. While it is easy to toss off a few Justin Bieber jokes, George tries for heroic at times and cowardly at times and angry at times and looking for a friend at a times. In other words, he feels like a young teenager. Mercedes Masöhn's Jenny, the stewardess whose dad wants her to go to flight school, Josh Cooke's Henry, a kindergarten teacher finishing a Ph.D. and going on about saving humanity, Phillip DeVona's jerk Nial, George Back's chubby but not a bad guy Ralph*, and Noree Victoria's medic with military training Shilah are all good characters though they sometimes give off a sense of deja vu that you've seen them elsewhere, played by other actors in slightly different roles, because you have. Overall thumbs up on the cast. They had a good time playing at having a bad time, and it works for me.

So now to the virus and the break out and the bad stuff. We have a movie that is about an hour and a half long. The first thirty minutes are set up. And there is not a whole lot to set up (worked earlier on in the genre, by now I'm pretty sure you just need to get with it a bit faster or try for something a bit different). By the time that half hour is up, you might have bailed. Finally, the virus breaks out and things get a little panicky. The plane is forced to land (apparently in Las Vegas, but I'm not sure if this is established and I missed it or if it would just be one of those things that everyone should know from clues). When they try to exit the plane (in one of the movie's first weird logical problems, a baggage handler is able to single handedly set up the connections to the plane and get people off, though everyone else has apparently abandoned the airport and it is under some sort of lock down) they find they cannot enter the main airport due to sealed doors, and they cannot leave through an electronically shut down back door. They are trapped inside, victims of a post-9/11 security system put to an unexpected use.

At this point, you know the story, people are going to get attacked an infected. Speeches and screamings and pleadings are going to be made as are decisions about what to do with the infected. The norms are going to be hunted through various hallways and scaffoldings and baggage areas and weird noises go on and on in the distance. It's the time where surprises are few (even if there are a few plot twists, you expect there to be some plot twists). Except does a decent job of tossing enough weird quick shots (like one of the pilots crawling like an animal in the back of the plane in a shot-from-hell vignette, and uses effective, and mostly non-CG I think, gore. The pacing of death and destruction is not bad at all, inevitable as many of the deaths are...the whole thing works. This is an entertaining low budget, DTV horror movie. Thumbs up for keeping me happy for the hour that remained.

It is just plagued with logistics problems. The CDC and a military presence are on scene within minutes of the plane touching down which seems awfully ungovernment (though I suppose they could have called a random terrorist threat alert, though they make a point of claiming the 911 operator doesn't know anything about an emergency). An expert who was apparently debriefed of the events of the first movie comes in, except we establish earlier that the first movie is concurrent to this one (as in, as the apartment is locked down, the airplane is taking off, so either the expert was flown in real fast or they spent a long time in the airport waiting)...and how does the statements "our team never came out" jive with "we found X and Y in the apartment building". Ok, fine, he and his were watching some feed, but it comes across as a lot more hands on. Not to mention that this is an airplane, with emergency exits. With probably at least six emergency exits. No one thought of that as a way to get out (especially once all of the infected have left the plane itself). Finally, towards the end there is rampant misuse of "infrared".

All said, there is not a single logistical error that made me go, "BAH! NO MORE!" though there were a few, as well as a few lines of dialogue, that made me shake my head. I enjoyed the characters. I enjoyed the plot points. I enjoyed the killing/hunting aspects. Liked the downplayed with moments of ratcheted up gore. I was a little disappointed in the generic aspects of the setting (rarely do they really justify setting it in an airport as opposed to, say, an abandoned factory). I think the big reveal slightly fumbled the ball, though it works as an explanation (and hey, needles in eye balls!). I will not say that is better than the original (unless, by that, you are commenting on the fact that the original was just a copy of another movie and mostly pointless due to this...) I would, and probably will, watch again. For the rest of you, I'll say probably rent it or stream it first and then go out and get s 1 + 2. That's a mighty fine combination.

* Of course, as a fat guy, I would love to see a fellow fat, white male be played off as something other than a (a) self-serving coward, (b) irreverent drunk/stoner, (c) mentally handicapped, or (d) sweaty pervert. I was, however, glad when Ralph pulled out an extension belt (a legitimate concern for overweight people on airplanes) and not a candy bar...most movies would have had him pull out a candy bar. I know it. You know it.