Summary: A group of teens take on the offer for a free movie ticket one night [in Berlin?] and end up being at ground zero for a demonic outbreak. Simple plot, simple characters, and a tiny set make for a cheap film to pass the time.

I have a special place in my heart for . Back around 1990, when I was in Junior High, we watched this in class. Considering this is a movie with a good bit of gore, I have no explanation for this occurrence, but I suppose, it has very little sex and only a bit of a nipple so that should be ok to show a group of early teens[?]. There are these scenes where some wound or another gets demoniacally infected and spews out big layers of green pus. Not realistic, per se, just green slime like the kind you once bought for a quarter from a machine while your mom was checking out at the local supermarket. In the movie, these various wounds would pulse a few times and then "splat". It at least conveys the meaning [infection!] and so it works, but that's about all it does. It is obviously just slime-gook as was popular for kids to play with. When I was thirteen, though, I thought I was going to hurl. I became so intensely ill that my memory of the movie is an effective nil. I remembered maybe five of the first twenty minutes and that was it. For this reason, I've always tried to remember to watch this movie and just never have.1 Finally spotted a copy a couple of nights ago and gave it a whirl. Was it as vomit inducing to adult Doug as to early-teen Doug? Is it, possibly, the most powerful movie ever? Well... 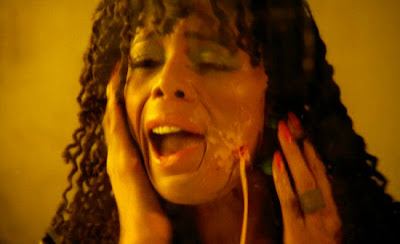 , which shares in its heritage not only Dario Argento on scripting and producing duties but also the son of Mario Bava—Lamberto Bava—as a director, is from the older school branch of the genre, when all you needed was for a handful of victims to gather in a place and to be subjected to some horror. In this case, we get a bunch of people handed a free movie ticket on the streets of Berlin2, leading them to a newly renovated movie theater where they attend a showing of a horror movie, and this leads them to being trapped inside with people getting infected, by demons, in something like a precursor to fast zombies if fast zombies were also clever and able to occasionally bends the rules of reason. At the core we have Cheryl, whose being slightly stalked by a strange masked man is the movies opening, and her friend Kathy who hates horror movies but is talked into joining in. We also have George, and George's friend, and cranky married dude whose anniversary gift to his wife was to take her to a free movie, and a blind guy who seems to know more than anyone else at a couple of specific times, and his...um...daughter? Or cheating wife? Something like that. Really, there are only about seven people you have any chance of actually remembering: the red head [more on her in a second], Cheryl, George, blonde Punkette who has cocaine scraped of her breast in one of the few semi-sexually charged scenes, blind dude, Tony the pimp [played by Bobby Rhodes], and the especially annoying prostitute. The latter-most effectively being the reason everything happens, since she got the first scratch.

The red-head? I don't know. Someone joked on IMDB.com that she is a literal joke, being a "red-hair-ing". For the first half of the movie, she appears to be Number Two in the demon-squad, at least a high ranking officer. She glares when she should talk, looks knowingly when she should intervene. Later, all at once, she is trying to help the victims out and is running around and is caught up in the same situation as them. I am technically spoiling this, since it could simply be dramatic irony [which I assumed], but no. It seems that once she drops the veneer of evil, she is a victim like everyone else.3 She isn't the only time the movie injects a bit of red herring in lieu of developed explanations. Later the victims find an empty, "lost", brick room that goes nowhere plot wise. At best, it is to be assumed that the room itself is the home of evil, but the closest the viewer gets to knowing this is watching the camera pan around the walls while people scream for a few minutes. Crew didn't even paint runes on the wall or anything from the Big Book of Cliches. Towards the end, the last 10 minutes or so, come a couple of big in your face plot punches that only make sense if you agree that they make sense. So, you know, be agreeable. 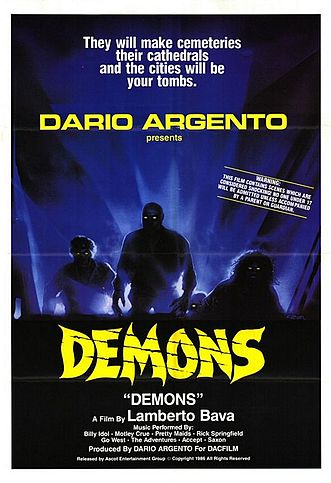 There are too many characters to care about [and later on I was pretty sure that new characters were showing up, without introduction, from the crew or pooled from extras to justify a few more deaths], gore ranges from alright to kind-of-alright, the story is fun but could be squeezed to a paragraph, the introduction half-way through of the punk characters that don't, spoiler alert, make it to the 75% mark, and some of the confusing points above make for an overall sloppy film. Mind you, a sloppy film with a great soundtrack, generally passable death scenes with a few especially fun ones, a visual gag as punks snort cocaine from a coke can, all the justification it needs to be a 90min gore feature, and a couple of characters—Tony the Pimp!—that are actually kind of fun to watch. It just, all in all, this is a movie best had with friends and popcorn and probably beer. A Fair film, worthy a rental, and for 80s horror fans it might even be worth a purchase.

1: Partially because I blended the title with and only recently discovered the mistake.

2: Dig the international flair of a movie set in Germany, staring Americans and Italians, directed by an Italian, with a mostly American [but not entirely] metal soundtrack.

3: What's the explanation? There are a few possibles. She could have been mind controlled up until a point. She could have helped the demons come about but then bailed on her plan when she was actually face to face with them. Maybe less crazily, she was simply hired to act all scary and aloof to add to the premier but dropped that when something legitimately went wrong. Maybe she was still evil when crap was going down but was swept up too much in the wave to let the demons know she was an ally, later. Maybe she was written at one point to be evil but once actual demons showed up, the writers did not need that any longer and so dropped it.

OTHER BLOTS THIS MONTH: December 2011