A Softer World totally gets (and/or steals) my worldview. Also, SMBC on the "Good citizens have nothing to fear", kind of...

Summary: I have a fairly simply philosophy about how to treat other people: do as good as you can, because what else is there? A Softer World totally gets it...

A Softer World totally gets (and/or steals) my worldview. Also, SMBC on the "Good citizens have nothing to fear", kind of...

I have often said that my only commandment is to not be an asshole [a post about which I wrote four years ago...on the same day that I washed my comforter in a bathtub]. And, since about the age of 16, one of my chief moral considerations has been a phrase that I heard attributed to a Buddhist principle, but which I've never heard actually confirmed as such: "Life is cruel, how can we be anything but kind?" These are the kind of concepts which Kurt Vonnegut turned into something like a beautiful, vulgar mantra:

Hello, babies. Welcome to Earth. It's hot in the summer and cold in the winter. It's round and wet and crowded. At the outside, babies, you've got about a hundred years here. There's only one rule that I know of, babies—God damn it, you've got to be kind. []

As my beliefs have moved from a cruel universe to an indifferent one to something much more like, "Well, the Universe is...see, and that's about what we get. Enjoy the roses but mind the influenza!"; when I read A Softer World yesterday, I was surprised, and a bit {a- || be-}mused to see my guiding moral philosophy stated so plainly, perhaps even mockingly:

The alt-text isn't too bad, neither: "Hand out your chuckles while you can."

And if you prefer not to get moral codes from webcomics, you can at least appreciate this one, where Saturday Morning Breakfast Cereal presents a variation on a bit of an important topic, where email watching and phone tapping and so forth and so on are justified simply as "Just in case, if you are not guilty then what do you have to hide!" and then we are promised that no one will ever look at the data unless there is a reason. And, well, of course, there may not be any data to begin with, but some people have implied that there could be data. We'll...yeah, let's just leave it here and get back to laughing at webcomics. 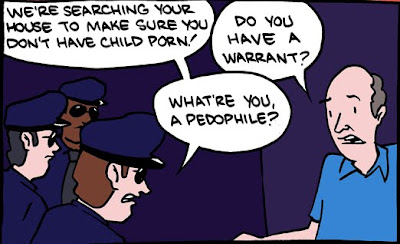 Before I go, let me go back to Vonnegut for a second, and leave you with this. And how about sometime in the next week you give it a try. Yes, you.

I urge you to please notice when you are happy, and exclaim or murmur or think at some point, "If this isn't nice, I don't know what is." []*

* Though I knew both of those bits beforehand, wanted to be exact when I posted them. For this, I used The A.V. Club's article: 15 Things Kurt Vonnegut Said Better Than Anyone Else Ever Has Or Will. Warning, you might get midcult all over you. Mmm...sweet, sweet midcult.

OTHER BLOTS THIS MONTH: February 2012