Summary: Gary Oldman plays mildy disgraced [by association] George Smiley in the film adaptation of the first of the Karla trilogy. You might ask how a 2 hour movie could possibly get all the bits in that made the book and older miniseries classics. Well, yes. That is a good question.

the gist: George Smiley [Gary Oldman] was kicked to the curb in the same scandal that brought his former boss, Control [John Hurt], down. Now, a year later, he is brought back in to surreptitiously find out which of four top agents in the Circus—foreign intelligence—has been selling out their country. Cat and mouse games follow mix with interpersonal discussion and introspection, as old soldiers and young lieutenants square off to expose the secret before the unknown enemy strikes first. 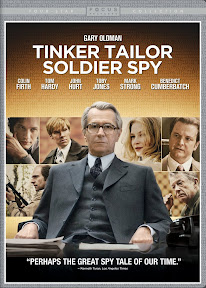 one paragraph review: For the first hour of this two hour movie, Gary Oldman purposefully channels dumbstruck. An overtly quiet person staring wide eyed at the scenes exploding from shot to shot and overlapping as the movie realizes it doesn't have a whole lot of time to cover a whole lot of ground: with a mixture of mumblemouthed paranoia slamming into screaming at the mildest provocations and violence melting into stern faced recrimination. Cold War era dialogue erupts into fist fights and gun fights and entrails spilling into bathtubs and mothers getting shot in street cafes. By the second hour, Oldman talks more, and the movie's back and forth direction starts to settle down with a borderline surreality creeping in [largely due to an Office Christmas party and then some], but the ability of the audience to have not wondered what the deal is since characters are refused a moment to breathe is sorely tested and it all feels on the edge of pointless. Which might be the point. A Fair adaptation of an excellent story, unfortunately held down by a weird dispassionate frenzy that encapsulates the theme but hurts the narrative. On the plus side, for every moment where it overindulges in loud volumes or gauche direction, it has three where the photography is dead perfect. Visually it is outstanding.

plus some paragraphs: It is almost impossible to touch this movie without bringing up the superior 1979 Alec Guinness starring miniseries, so I will do so in brief. Yes, that six-hour take on the same story was better paced, and largely better acted, but it is the outright differences that are most telling. The miniseries had some shouts, some violence, but it was the Cold War, after all, and dead bodies piling up in the street would have been truly scandalous. The movie tries to sell us on mortal dangers, rather than sociological ones. And when it tries to sell us on the sociological ones, such as the narrated but not seen flashback to Smiley's confrontation with Karla, we are told what was meant rather than shown. For those fans who say this movie doesn't talk down them and let's them solve their own puzzles, having answers handed out at a hectic pace does not negate the fact that few things are left without a pat answer by the end.

Its second is the utter expulsion of every bit of characterization not direclty central to the plot. Ricky Tarr [Tom Hardy]'s irrepressible personality is muted to pouty. We are led mostly to trust what he says, rather than wonder if [and be pretty much positive that] he is playing some game of his own. Irena's ironic faith in martyrdom and strength in Christianity, and the fact that she is more the masterspy than Boris, are tossed aside for something more like a lovesick woman who gets abused and then retreats behind the power of a man. And while Toby Jones and Ciaran Hinds and Colin Firth and David Dencik play their roles well enough, and I even prefer Hinds portrayal of Roy Bland to the miniseries, none of them are given enough to make the audience care if they are a traitor or not. Good luck understanding the Witchcraft project and how it fits into the story. And with all the things this movie leaves behind, we get additional scenes of day to day life that add little.

With something this dense, it might have been better to put the source aside and find another way to explore the core story. As it is, it is really not a bad movie, but it is a movie who remade something without improving upon it.

OTHER BLOTS THIS MONTH: March 2012